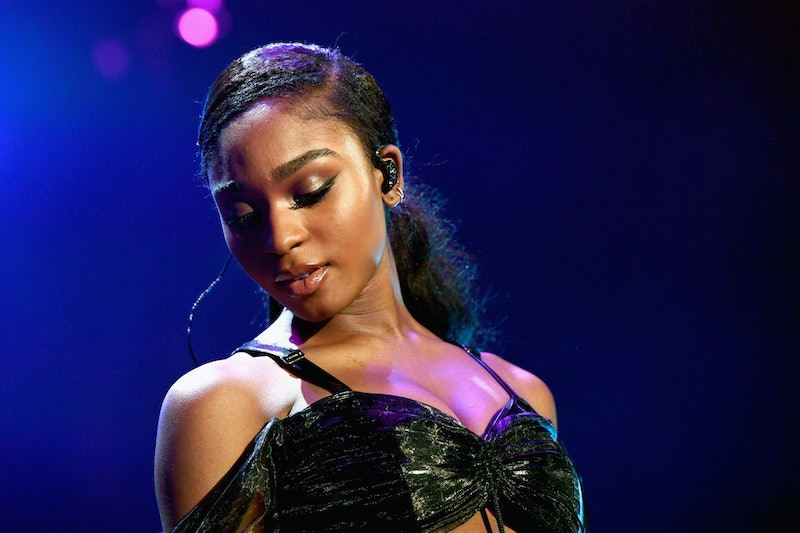 Nothing prepares you for a career in pop stardom quite like being in a chart-topping girl group, but as Normani can attest, it also prepares you for the darker side of being in the spotlight. In a new interview with Billboard, Normani opened up about being the only black member of Fifth Harmony, explaining that the prejudice she experienced helped push her to succeed as a woman of color in the music industry.

Noting that she felt boxed in by her reputation in the group as simply "the dancer," Normani explained that she struggled to break out and catch audiences' eyes. "It was like, 'Hey, I’m also here, and I’m really good at what I do. I work just as hard," she said. "I feel like I have to work 10 times harder just to prove to everybody that I also deserve to be here." Later in the interview, she opened up about the toll that her role as the only black member took on her, adding, "It was a ­subconscious thing. You think, ‘Why am I the least followed in the group?’"

"Even if you don’t recognize that you’re paying close attention to it, it takes a toll on your confidence. You worry — is it me? Is it because I’m black? Or am I just not talented?'" she continued.

And though she noted that her bandmates — Camila Cabello, Dinah Jane, Ally Brooke, and Lauren Jauregui — tried to support her through the racist vitriol she endured, the singer admitted that they didn't understand the experience that she was going through. "They tried to be there for me as best as they could," Normani explained. "But I don’t think they had the tools that they needed, because it’s not their experience. I can give them credit for trying to be there for me, but at the same time..." At the end of the day, she noted, "The girls don’t experience things the way I did."

But while she did admit that being the only black woman in the band, and all of the ugliness that came with that position, took a major toll on her mental health, Normani did note that the experience has pushed her even harder to succeed. "There’s so much that I have to get off my chest," she said. "And there’s a responsibility I have as a black woman — one of the very few to have the power to kill it."

She continued, "Even in the mainstream, there’s not many of us. Especially ­chocolate girls. Like, being African-American is one thing, but girls [with] my complexion, it’s unheard of. It’s me, and SZA. Who else?"

Normani's lifelong love of Beyoncé is well-documented, but in this new interview, she also revealed that there was another member of Destiny's Child whose career she hopes to emulate as she gets bigger and bigger. "I see myself in Kelly [Rowland]," she explained. "She’s killing it for brown girls. She carries herself gracefully, and 'Motivation' — girl, that was the prime!"

Normani's newest single, "Dancing With A Stranger," a collaboration with Sam Smith that was released on Friday, Jan. 11, captures some of the sultry, seductive vibes that Normani found in Rowland's music, and fans can expect her album to echo her new, mature vibe. Describing her upcoming album as "sultry" and "dominant," the former Fifth Harmony member teased that she's worked with artists like Missy Elliot and Ariana Grande collaborator Victoria Monet. In August, she also created some buzz about a possible collaboration with Nicki Minaj after the rapper praised her during the MTV VMAs.

"I've been able to start from the ground up," she told E! News in October about the process of recording her debut solo album. "I've been able to wear many different hats." Clearly, all of that time experimenting in the studio has left Normani more confident than ever, and ready to step into the spotlight as a solo artist — and prove that she's been a major star all along.

More like this
Self Esteem's “F*cking Wizardry” Is An Anthem About Knowing Your Worth
By El Hunt
Everything To Know About Taylor Swift’s 10th Studio Album, 'Midnights'
By Grace Wehniainen and Jake Viswanath
Twitter Is Freaking Out Over Rihanna’s 2023 Super Bowl Halftime Show Announcement
By Stephanie Topacio Long
What Demi Lovato Really Thinks About Child Stardom, Depression, & Sobriety
By Radhika Menon
Get Even More From Bustle — Sign Up For The Newsletter