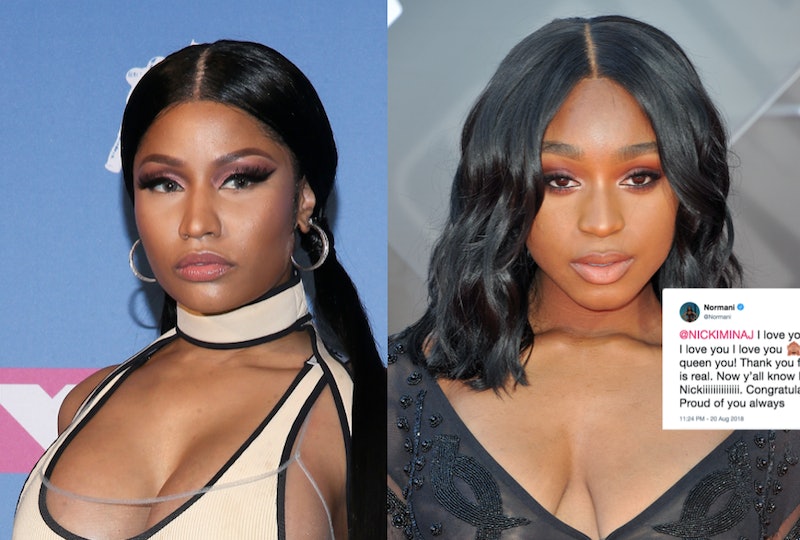 Fifth Harmony might be on hiatus at the moment, but they still managed to be the center of attention at the MTV Video Music Awards on Monday night — it's not just because Camila Cabello won Video of the Year. No, Harmonizers everywhere have Tiffany Haddish and Nicki Minaj to thank for bringing the girl group back into the spotlight, after Minaj defended Normani Kordei from Haddish's jab about the band watching from home.

While presenting the Best Hip-Hop video with her Night School co-star Kevin Hart, Haddish praised Cabello for being one of the night's most nominated stars, joking, "She's nominated for five VMAs tonight, five of them. I'm super proud of her, so those of you watching at home, hi, Fifth Harmony!" Of course, when Minaj then won that award, she made sure to let Haddish know exactly how she felt about that little jab.

While accepting the Moon Person for her "Chun-Li," video Minaj said, "Tiff, don't be coming for Fifth Harmony because Normani is that b*tch," before pausing to throw an exaggerated side-eye at the camera. Naturally, Harmonizers everywhere expressed their gratitude for Minaj's defense on social media, after which Normani herself weighed in on the whole thing on Twitter.

Over the years, Normani and Minaj have developed a friendship, with the "Love Lies" singer often speaking out about how much she loves and admires the rapper and her career. In June, after Minaj put out a call for female singers to collaborate with for an upcoming project, Normani volunteered herself for the task; in early August, the singer stopped by Minaj's Beats 1 Radio Show, where Minaj noted that she was "super duper proud" of the singer.

Of course, between those appearances (and hints at a possible collaboration), and Minaj's declaration of support for Normani, fans have naturally responded to the singer's tweet with formal requests for the pair to release new music together.

Back in March, Fifth Harmony announced a hiatus, saying that they were planning to focus their efforts on solo projects in a statement on Twitter. "After six years going hard, non-stop, we also realized that in order to stay authentic to ourselves and to you, we do need to take some time for now to go on a hiatus from Fifth Harmony in order to pursue solo endeavors," they wrote.

Though she's kept a low-profile on social media since, Normani did confirm that she is working on a solo album in an April interview with Billboard, where she revealed that she collaborated with another legendary female rapper, Missy Elliot, for the project. "The fact that she’s even willing to take a chance on me as a new artist means a lot, considering that she’s the one I’ve looked up to since I was a little girl," Normani said. "I literally remember dancing in my grandmother’s living room to all of Missy Elliott’s records."

She's also enjoyed a smash hit single, "Love Lies" — another collaboration, this time with R&B singer Khalid — which was featured on the Love, Simon soundtrack.

And with all of those collaborations under her belt, it doesn't seem totally out of the realm of possibility for Normani and Minaj to work on one more for the singer's debut album. But even if these two don't manage to hit up the studio together any time soon, one thing has been made very clear: Think twice before throwing shade at Fifth Harmony in front of Nicki Minaj.

More like this
What Is Megan Thee Stallion’s Net Worth? The Traumazine Hitmaker Isn’t Worried About A Budget
By Hugh McIntyre
Megan The Stallion’s “Anxiety” Song Shouts Out Britney Spears & Whitney Houston
By Grace Wehniainen
The Best Memes & Tweets About Beyoncé’s Surprise “I’M THAT GIRL” Video Teaser
By Brian Anthony Hernandez
'Traumazine' Has Megan Thee Stallion Twitter Dancing Through Their Feelings
By Grace Wehniainen
Get Even More From Bustle — Sign Up For The Newsletter