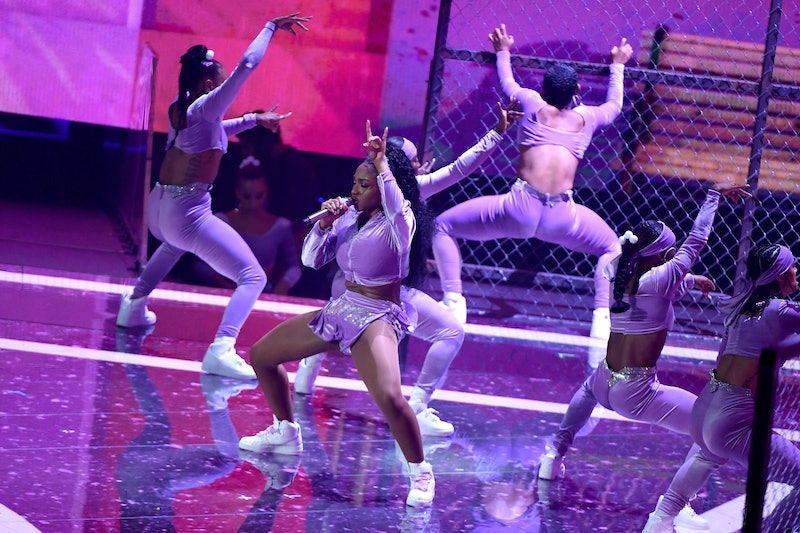 If anyone needed any motivation to look into dance classes, Normani's 2019 VMAs performance likely would have done the trick. The singer made her solo debut on the VMA stage with a basketball-themed performance that brought the "Motivation" video's most iconic and impressive choreography to life in front of a live audience.

Rocking a lavender version of the early-aughts inspired two-piece she wore in the video — this one featuring the word "Motivation" on her skirt — Normani kicked off the performance by being lowered onto the stage from a giant basketball hoop before showing off some of the jaw-dropping choreography that made fans obsessed with the music video.

While she didn't break out the video's now-legendary basketball trick, the former Fifth Harmony member did pay homage to her video during the song's bridge, which led to a breakdown that featured the same rain effect as the clip. Between the choreography, costumes, and all of the elaborate set pieces, it was a throwback to the golden age of the VMAs, because Normani is nothing if not a fan of the early 2000s.

And if fans weren't awed at that point, Normani's dance solo, which featured splits, twerking, and an epic backbend that turned into a flip, had fans on Twitter bowing down to the new pop princess.

While Normani's performance is her first time at the MTV VMAs as a solo artist, she still managed to make headlines at last year's awards, when Nicki Minaj declared her "that b*tch" while accepting the award for Best Hip Hop. After Tiffany Haddish, who presented the Moon Person alongside Kevin Hart, joked that all of the members of Fifth Harmony besides Camila Cabello were watching the show at home, Minaj showed her loyalty to the "Motivation" singer.

"Tiff, don't be coming for Fifth Harmony, because Normani is that b*tch," Minaj said, before pausing to throw an exaggerated side-eye at the camera. In response, Normani gushed on Twitter that Minaj was a "perfect queen" and thanked her for the support. "Thank you for lifting me up. God is real," Normani wrote. "Now y’all know I love me some Nickiiiiiiiiiiiiii. Congratulations on tonight!!! Proud of you always."

A year later, it seems like Minaj is far from the only person impressed with Normani after that performance:

While "Motivation" is Normani's first solo single, she has been working on her debut album for quite some time now, telling Billboard in April 2018 that she's been working to get things right before releasing a full record. "Some people hadn’t known who Fifth Harmony was or people only got to see a fraction of Normani in Fifth Harmony, so it’s definitely an opportunity to do it my way," she told the outlet, adding that her solo music will be "a melting pot of different things I’m inspired by."

In addition to getting to finally show off the music she's been working on solo, Normani's VMAs performance was a chance to inspire other black girls the way her favorite artists inspired her. "It’s so amazing to see young girls and young African-American guys or people older than me being able to say, ‘Oh my gosh, we’re so proud to be able to call you our queen,’ and ‘You’re such an amazing representation for all of us,'" she told Billboard.

Thanks to that epic, perfectly choreographed VMAs performance, we're sure there are quite a few more people who will be calling Normani a queen.