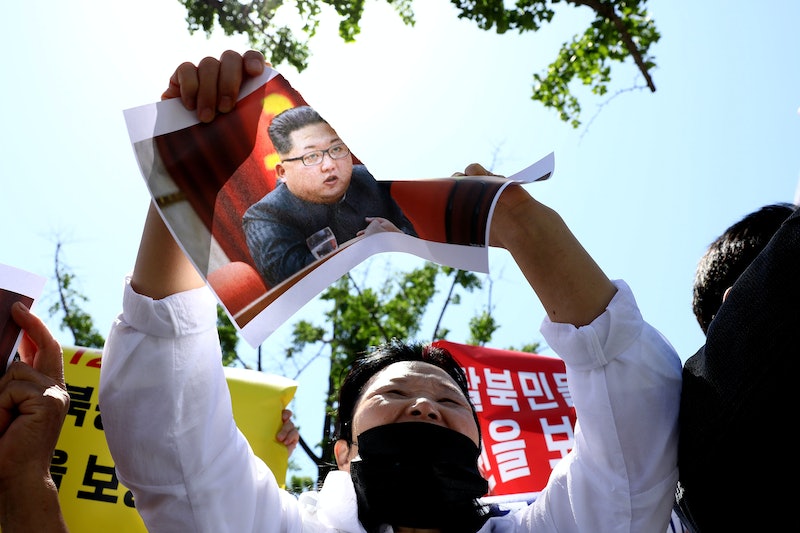 The upcoming U.S.- North Korea summit in Vietnam is centered around striking a deal to denuclearize the Korean peninsula. But there's another topic that advocates want the leaders of both nations to discuss while they're at it — North Korea's human rights record.

Human Rights Watch describes North Korea as "among the world’s most repressive countries," prohibiting its people from participating in "political opposition, independent media, civil society, or trade unions." According to Amnesty International, "systematic, widespread and gross human rights violations" continued in 2018, including arbitrary arrests and forced labor in political opposition camps. According to Reuters, North Korea denies the existence of human rights abuses and says the accusations are a ploy to make the country an international pariah.

One of the most publicized instances of the country's human rights abuses came in 2016, when an American college student, Otto Warmbier, was accused of tearing down a propaganda poster while visiting Pyongyang with a tour group. North Korean authorities detained Warmbier and sentenced him to 15 years in hard-labor prison. According to a U.S. judge, he was likely severely injured while in custody, sustaining a brain injury that eventually put him in a vegetative state. Warmbier died shortly after being returned to the U.S. in 2017. North Korea denied any abuses or responsibility in his death, according to The New York Times, but the U.S. State Department responded with additional sanctions for "egregious abuses of human rights and fundamental freedoms."

North Korea, which has been under one-family authoritarian rule for three generations, is largely closed off to outsiders. According to reporting from BBC, the North Korean government spies on its citizens through networks of informants, and forces them to display loyalty to Kim Jong-Un and the rest of the ruling family.

Additionally, all North Korean media is state-controlled, earning the country the last place in Reporters Without Borders' (RSF) rankings of press freedom around the world. According to RSF, North Koreans can also be sent to concentration camps for consuming media sources based out of the country.

Women's rights are also under attack in North Korea. Though it's difficult to get hard data on things like wage gaps or domestic violence, BBC reports that women are frequently deprived of education or job opportunities. "Women are really vulnerable," Human Rights Watch's Asia director Brad Adams told BBC. "Sexual violence exists but if someone assaults them they have no one to complain to."

And while religious freedom is technically guaranteed by the government, Amnesty International researcher Arnold Fang told BBC it's basically a façade. "In reality, there is no freedom of religion," Fang told BBC earlier this week. "Everyone is indoctrinated to treat the Kim family almost as something to worship."

Given this history of human rights abuses, the blossoming friendly relationship between Trump and Kim came as something of a shock to advocates, politicians, and others, following the first U.S.-North Korea summit in June. Human rights was not a major topic during the Singapore summit, according to Trump, because denuclearization is more pressing. According to Politico, when reporters pressed him on why he wasn't more critical of the country's human rights abuses during the summit, he deflected, saying, "Yeah, but so have a lot of other people done some really bad things. I could go through a lot of nations where a lot of bad things were done."

In the run up to the second summit in Hanoi, the White House has shown signs it is again prioritizing nuclear talks over discussions of human rights abuses. In December, Vice President Mike Pence cancelled a speech about North Korean human rights violations amid tensions in denuclearization talks, according to ABC.

In fact, following the Singapore summit, the United Nations' Special Rapporteur Tomas Quintana, a North Korea human rights expert, reported the situation isn't improving at all. "Despite the marked improvement in the geopolitical situation, there have been no substantial changes in the serious human rights situation in the Democratic People’s Republic of Korea," he wrote, adding that "to sideline human rights in peace agreements and dialogues is to weaken the international system of protection for the people living in" North Korea.