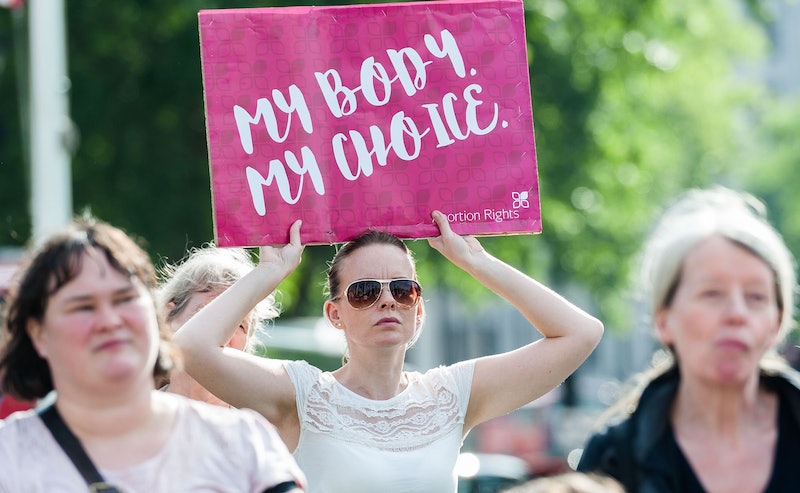 In June 2017, a government policy change was passed that enabled Northern Irish people to receive an NHS abortion in England free of charge. But a new study has indicated that people still experience multiple barriers in their efforts to obtain an abortion, from difficulty travelling to England to stigma and fear. Others opt to order abortion medication online, risking prosecution if their parcel is intercepted. Northern Ireland's abortion laws negatively impact people's health, the study concludes — ahead of the presentation of a bill to decriminalise abortion to the UK parliament.

Researchers from the University of Texas at Austin interviewed 30 Northern Irish people for the study, which was published in the BMJ Sexual and Reproductive Health journal. The people interviewed had either travelled to Great Britain to terminate a pregnancy or ordered abortion medication online; some obtained their abortion before the government policy change, and others after.

In Northern Ireland, as the BBC reports, abortion is currently only permitted if a person’s “life is at risk” or there is a “permanent or serious risk” to their “mental or physical health." A pregnant person can't obtain an abortion in the case of rape, incest, or fatal foetal abnormalities. In June 2018, the Supreme Court dismissed an appeal by a human rights organisation that challenged the legality of the Northern Irish law; however, according to the BBC, most judges on the court concluded that the current restrictions contradicted human rights law in instances of rape and fatal foetal abnormality.

The University of Texas study drew three major conclusions about the impact of Northern Ireland's laws on abortion. Firstly, people "still experience multiple barriers to travelling to access abortion care," despite the policy change that enables them to receive a free abortion in Great Britain. Some prefer to order abortion medication online, but "the experience is dominated by fear and isolation due to the risk of prosecution," the study says. The researchers also flag a "lack of clarity" around Northern Irish abortion laws; this can delay access to care and undermines trust in the healthcare system.

Since fees were abolished, the number of Northern Irish people receiving abortions in England has increased by 14 per cent, according to the BBC. But barriers to access still prevail. Many people interviewed for the study cited travel costs as a prohibitive factor. Though people receiving income support or with an income less than £15,276 can have their travel and accommodation costs covered, the researchers found that none of those they spoke to were aware of this provision.

One participant described helping a friend to organise an abortion in England, borrowing money from a risky source to fund the journey. "We had to book flights, which were horrendously expensive given the timeframe," the 34-year-old said. "She borrowed the money from [a proscribed organisation]. She couldn’t access funds any other way because she was in debt already, and so she couldn’t get a credit card or bank loan."

Another participant, a 40-year-old parent of two who ordered abortion medication rather than travel to England, explained that it would be impossible to keep the purpose for her trip private: "It would have been a whole host of lies: 'Why are you getting up so early? Where are you going? Why will you not be back until late? Where have you been?'" Others cited difficulties arranging childcare, or obtaining a passport in time.

As well as the restrictions to travel, those surveyed who opted to order abortion medication online also did so for reasons of "comfort, privacy, and autonomy," the researchers found. Some feared travelling home while in pain or bleeding after obtaining an abortion in England. The majority of those who bought medication online, however, described their fear of being arrested; many hesitated to seek support from friends or family.

A 36-year-old, who has five children, told the researchers, "I never slept for weeks tracing that parcel. Oh my god, it was a scary time, and I probably never settled for even a week after receiving it, because I was so scared that the police were going to land on my door." Others had their parcels seized by Customs, or feared they'd arrive too late to be effective.

The study also reports a degree of confusion and misinformation about abortion laws in Northern Ireland. A 20-year-old who ordered abortion medication said that she didn't tell a doctor about her plans because she assumed they'd report her to police, while another believed she wouldn't qualify for an abortion despite her health issues and ordered medication online (she ultimately received an abortion in Northern Ireland).

Some doctors neglect to give their patients information on clinics in England, the researchers found. "The doctor just gave me unplanned pregnancy counselling but said that there was nothing that could be done," a 35-year-old said. "It’s very frightening and very demeaning not to be able to control your own health, especially with something that’s life-changing."

This week, as the Guardian reports, Labour MPs will launch an "ambush" in parliament in an attempt to soften Northern Irish abortion laws, as well as to legalise same-sex marriage in the country. And the University of Texas study, its authors say, proves that a change in the law is long overdue. "Our findings provide important evidence of the negative impact of the current law on the quality and safety of healthcare in Northern Ireland," the study concludes, "and offer a public health rationale for ending the criminalisation of abortion."