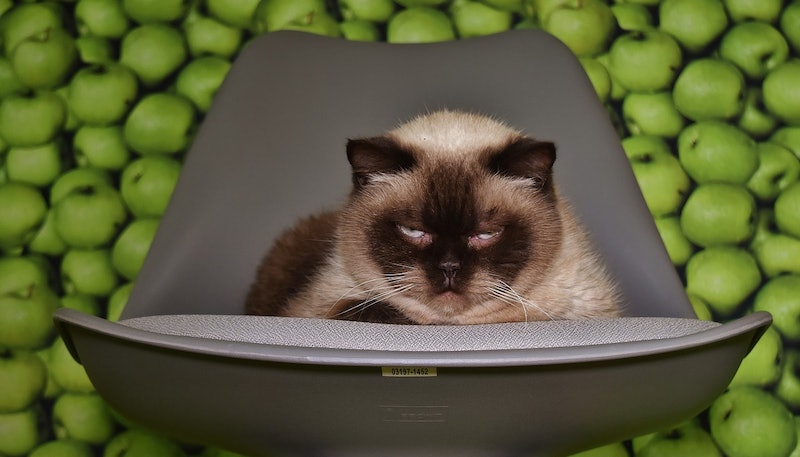 I am not a morning person, and despite having to be up between 5 and 5:30 a.m. four days a week, it is extremely difficult for me no matter what time I go to bed. However, it turns out that might not be my fault: New research indicates that being a night owl or morning person could be genetic, which means I'm not a total failure for not having this whole early bird routine down like those real rock-star morning people. You know the types — they're up doing sun salutations before the actual sun comes up, and no one is forcing them to do this. They want to do it. It turns out there might just be a scientific reason why some us would rather be thrown in front of a bus than downward dog before sunrise.

Michael W. Young has been studying sleep science for more than 45 years, and his research indicates that a gene mutation may determine why some of us just can't become morning people, according to new article published in the journal Cell.

I truly have no frame of reference for this desire to be up so early. And, I have received tons of advice from well-meaning people about what I am doing wrong in my pursuits to making getting up early easier. Exercise more, lay off the caffeine, go to bed earlier, change your diet, blah, blah, blah. I have tried all of these things, and if I skip my morning coffee it's like that scene in Gilmore Girls where Lorelai says she can't stop drinking the coffee because, without the coffee, she can't do the standing, and the walking, and the talking.

Is Being A Morning Person Based On Genetics Or Lifestyle?

For me, skipping the coffee is like trying to drive the car without the keys. Try it, and see how far you get. Additionally, in high school I was late more than 50 times my senior year, and my school didn't start until 8:50 a.m. I physically could not get out of bed no matter how hard I tried.

Young's study identifies a gene mutation called CRY1, which delays the internal clock of those who have it by a few hours making them go to sleep and get up later. Young tells Fortune that humans evolved over centuries to adapt to fluctuations in light and temperature, and your body produces specific enzymes to promote waking and sleeping, which is why getting up before the sun rises is not natural. Before the sun comes up, your body has not released the waking enzymes that stimulate appetite. In turn, surrounding yourself with light before bed can prevent your body from producing melatonin, which helps you fall asleep.

For those with the CRY1 mutation, their bodies didn't get the memo about waking and sleeping enzymes, which can make living a normal life challenging, and they might look more like extras from The Walking Dead than their well-rested peers. "You can imagine what that does to someone with a normal work schedule,” Young tells fortune. “They’re exhausted all the time.”

Is It Possible To Become A Morning Person?

Can you change this pattern, even if you do have the gene? Young says yes, but it can be a constant battle. Fortune reported that one of the study participants who was a lifelong night owl tested positive for the CRY1 mutation, and she also had a job that required her to wake up around 5 a.m. By sticking to a strict schedule that involved setting an alarm and waking up at 5 a.m. — even on weekends — she was able to partially rewire her sleep-wake cycle, but the practice required constant vigilance.

"If she lets her guard down, and sleeps in at a weekend, it produces all kind of problems,” Young told Fortune.

Because sleeping and waking is actually based on a rhythmic pattern known as your circadian rhythm, disrupting this natural pattern in any way can throw off your sleep cycle. Unfortunately modern society is pretty much designed to sabotage your sleep. And, the U.S. Centers for Disease Control and Prevention estimates that more than 50 million Americans have a sleep disorder.

Personally, even if I attempt to go to sleep early, I get a burst of energy around 9 p.m., and the "I'm so tired" monologue that's been running through my head all day vanishes. The problem is that in order to get eight hours of sleep I should be going to be by 9:30 p.m., right after I suddenly feel awake.

Additionally, if you've always fallen asleep easily, and now find it harder, your smartphone, computer, or tablet could be to blame. Australian researcher, Professor Shantha Rajaratnam, noted in an article by ABC Australia that while all artificial light can throw your sleep pattern off, shortwave blue light emitted from electronic devices creates the biggest problem, and can actively suppress melatonin production.

I wish I had better news for you. If you're like me, and prefer to only see 6 a.m. if you're still up from the night before, there is no magic wand to make you embrace being a morning person. However, not greeting sunrise with the glee of a songbird doesn't mean you're a failure of any kind, and if you do have the CRY1 mutation you'll have an even harder time trying to force yourself to get on the morning person love train. Maybe you don't have to.

An article in Fast Company suggests that it's not necessary to force yourself to adapt if it's truly making you miserable. In fact, this guy took the words right out of my mouth. "I’m just not a morning person, and I don’t function that well," Harley Bauer told Fast Company. "No matter if I got three hours of sleep or 10 hours of sleep, if I wake up early, it’s the same effect.”

Harley solved his problem by being honest about his needs to work an atypical schedule, which is much more common, and more accepted, now than it was for previous generations. And, research indicates that night owls tend to have higher IQs, so if you're suffering through an early morning routine you can take comfort in the fact that you most likely demonstrate "a higher level of cognitive complexity" than your early bird peers, according to researchers from Belgium and Switzerland studying sleep habits.

So, while you may be tired, you're also pretty smart. Smart enough to know you need a nap and some coffee. Me too.