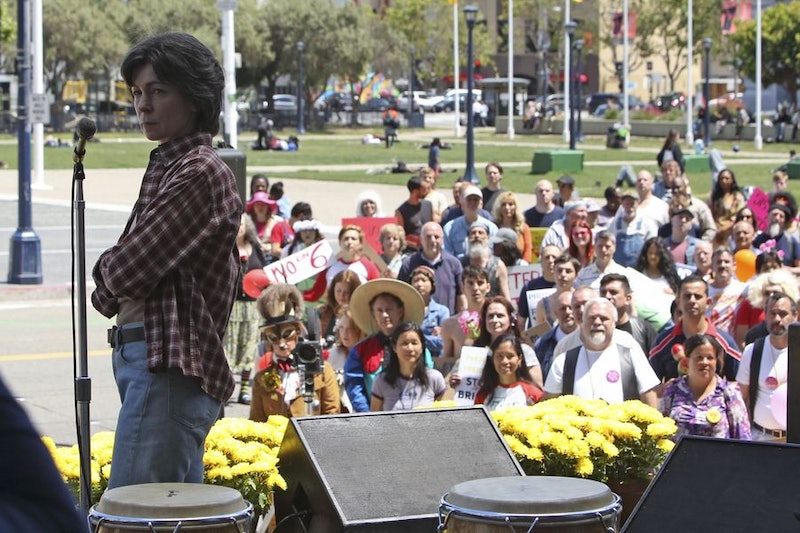 NOW was founded in 1966, just a few years before the events of When We Rise begin. Both the LGBT and women's rights movements made a lot of progress and faced many obstacles in the latter half of the 20th century, so it makes sense that their missions sometimes intersected. And since women and LGBT citizens face challenges to their rights under the current political administration, it should come as no surprise that neither group has stopped fighting for equality. NOW is still around today after over 50 years, and won't be slowing down anytime soon.

The National Organization for Women has adapted with the times, taking to Twitter to celebrate notable women for #FeministCrushFriday, and spreading the word about how everyone can fight against the opponents of human rights of all kinds. Although it's a major focus in an age of social media, NOW doesn't limit their actions to just spreading awareness. It encourages citizens to take action, taking an active hand in fighting institutions that don't ensure equality for all.

The initial mission of NOW, as established in the late-1960s, was "to take action to bring women into full participation in the mainstream of American society now, exercising all the privileges and responsibilities thereof in truly equal partnership with men." As time has gone on, their mission has both expanded and gotten more specific, leading to six core tenants of their mission. NOW strives to secure reproductive rights, end violence against women, ensure economic equality for all, fight for LGBT equality, fight for racial equality, and secure a Constitutional amendment to make sure that everything they've fought for can't be taken away.

If seeing their early history moves you to join the National Organization for Women, you can sign up for a membership and even join a local chapter on their website. You can also select your own amount of membership dues starting at $10 to support the non-profit.

The fact that NOW is prominently featured in When We Rise, despite not being directly related to the LGBT movement covered across the miniseries, highlights the idea of intersectionality. As the first two-hour part of the miniseries shows, the women's, LGBT, and civil rights movements influenced and affected each other during an especially tumultuous time, and seeing their roles in history should be nothing short of inspiring.