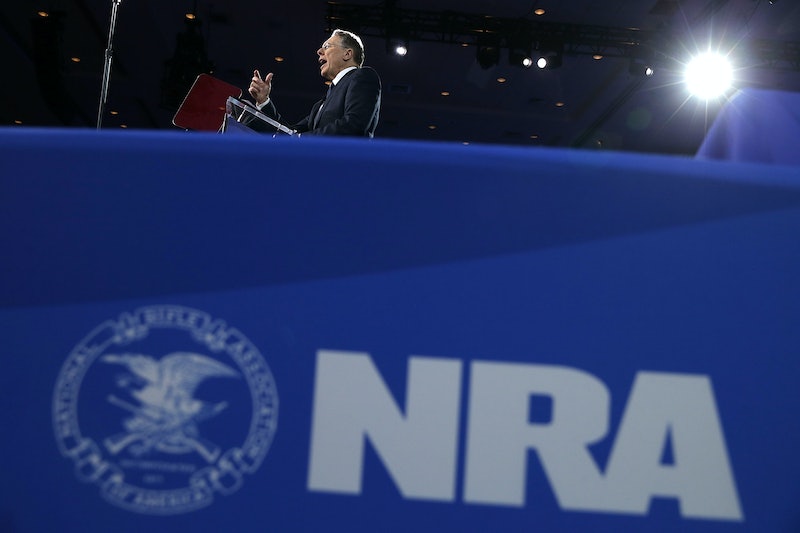 A fiery appearance on CNN featuring Women's March co-organizer Tamika Mallory and National Rifle Association spokesperson Dana Loesch on Sunday finally brought about a statement on Philando Castile's death from the NRA. Though the NRA had stated it would wait to comment on the police shooting of Castile, a black gun-owner, until his death was fully investigated, the association refrained from making a statement until now. The delay sparked claims that the NRA fails to properly protect gun-owners who aren't white, though it has insisted that it defends all Americans.

The subject came up while Loesch and Mallory were addressing recent NRA ads released last month that activists alleged pitted NRA members against protestors and organizers. Mallory penned a letter two weeks ago that called-out the NRA for its mostly quiet response to Castile, as well as for the video ads that featured Loesch.

In their exchange, later posted to the Women's March Instagram account, Loesch said that she was speaking on behalf of the NRA when she called Castile's death "absolutely awful" and "a terrible tragedy that could have been avoided."

I don't agree with every single decision that comes out from courtrooms of America. There are a lot of variables in this particular case, and there were a lot of things that I wish would have been done differently. Do I believe that Philando Castile deserved to lose his life over a stop? I absolutely do not.

I also think that this is why we have things like NRA carry guard, not only to reach out to the citizens over what to do during stops like this, but also to work with law enforcement so that they understand what citizens are experiencing when they go through stops like this.

Shortly after Castile's death, the NRA did give a brief statement, writing that it believed it was important not to comment during an ongoing investigation, asserting that it "proudly support[ed] the right of law-abiding Americans to carry firearms for defense of themselves and others regardless of race, religion, or sexual orientation," and that it would have more comments "once all the facts are known."

However, Jeronimo Yanez, the Minnesota police officer who shot Castile, was acquitted nearly a month ago on June 16. During the trial, Yanez claimed that he "thought [he] was going to die" when he pulled Castile over at a traffic stop. According to recordings, however, Castile had explicitly let Yanez know that he had a gun with him and that he was not reaching for it. Still, Yanez fired his own weapon at Castile. Mallory's letter questioned why these facts didn't warrant a more immediate response from the NRA on protecting gun-owners.

Mallory added that the NRA's video, which she called "a direct endorsement of violence against these citizens exercising their constitutional right to protest," called into question whether the NRA was truly protecting the rights of all gun-owners — including people of color. After closing her letter with a request for a retraction or an apology, the gun advocacy group refused.

Although this statement on Castile is the most explicit acknowledgement from the NRA in some time, activists remain skeptical as the Women's March organizers plan a protest against the NRA this upcoming Friday.