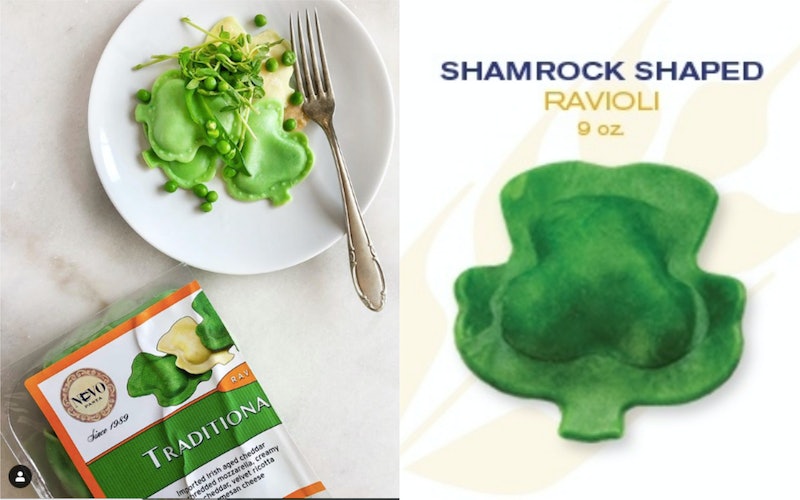 You may associate St. Paddy's Day with green beer and, well, more green beer, but this holiday season it seems that they're really upping their game. Costco, the genius behind Valentine's Day heart-shaped raviolis and buying 13,000 rolls of toilet paper in one go, is bringing something big this March. Cheese-filled SHAMROCK ravioli is coming your way, because once they mastered heart-shapes, they wanted more of a challenge. Costco's Shamrock five-cheese ravioli from Nuovo was spotted by the Instagram account Costco Buys and they're already making an internet stir, because anything cheese-filled has the power to do that. God bless America.

As ever, Costco goes big. Per Costco Buys, this pasta is available for $9.79, but that includes two 20-ounce pouches of ravioli. One for now, one for later or two for now, none for later. The choice is yours, because either choice is delicious.

If you're not already on board (which hard to imagine, because a cheese and beer-themed St. Patrick's day sounds amazing), they also offer a serving suggestion to bring things up a notch. "Create the perfect seasonal pasta with our Chef's Irish vodka sauce recipe," they suggest, and the recipe is found right on the package. Now, some among you may say that "Irish vodka" doesn't sound so much like a real thing, because of facts and history, but to you I say one word: POTATOES. The connection between the Irish and vodka. The connection between all of humanity, really.

There are a lot of different ways you can choose to celebrate St. Paddy's Day. Though, of course, the biggest way to celebrate in the United States tends to be a huge parade, like the ones we see in Boston or New York, that's not the only way you can get in touch with your Irish side. You can totally celebrate St. Patrick's Day at home, with some Irish recipes. In fact, if you haven't tried Irish soda bread (it's a thing), I recommend you stop what you're doing right now and make it for breakfast. Although parades and binge-drinking seem to be the theme of St. Patrick's Day in America, you can always go back to the roots. There are plenty of options for how to remember the death of St. Patrick without drinking green beer. But of course, green beer is always an option along with, for some reason, Mardi Gras-types beads, if you're looking for a way to cut loose.

St. Patrick's Day is a great way to make your March a little more exciting, but in my opinion there have been far too few cheese-filled, pasta-based options for merriment... until now. Costco made a huge splash with Nuovo's heart-shaped ravioli, but not they're back with more Irish-y flavors (and more complicated pasta shapes). Shred some green cheese on top and you have yourself a one-person celebration in a bowl. Happy eating.