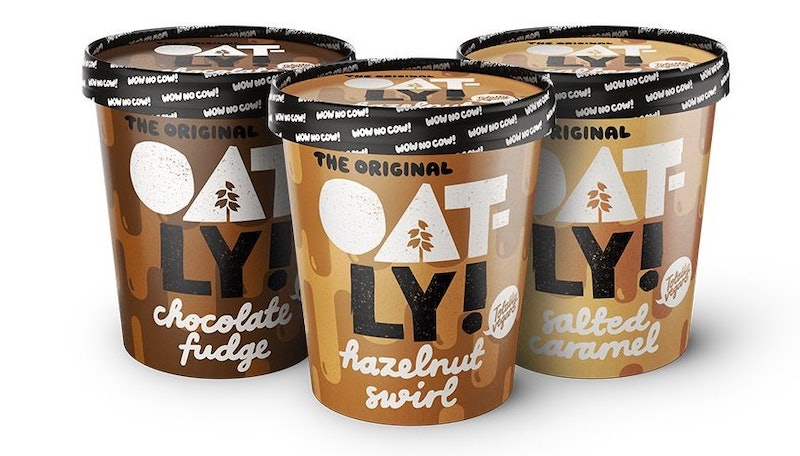 When it comes to dairy alternatives, there seems to be more choice on the supermarket shelves than ever before. From almond and rice milk to coconut, hemp, and even tiger nut milk — just about any grain or nut can be transformed into a milk with its own unique taste these days. And this means even more variety for dairy-free desserts too. Which is excellent news because all sweet-toothed folk deserve a good treat, no matter their dietary requirements. So vegans and dairy-free eaters rejoice because yet another dessert range is joining the ever-growing plant-based products. All-oat drink brand Oatly has released a trio of ice creams which are coming to supermarkets across the UK.

That's right, the company that's so popular there was a a UK shortage of their oat milk last year due to high demand and the fact it’s so damn delicious, have dropped not one, but three new oat-based ice creams. The new range will be exclusively hitting Tesco stores on October 30 and the flavours include chocolate fudge, hazelnut swirl, and salted caramel which means there's something for every vegan/plant-based/dairy-free eater out there.

These three new flavours are meant to be nothing more than a super indulgent treat. So expect plant-based fully-hydrogenated fats in there, because this is an ice-cream not an apple.

Let’s not lie, some plant-based milks are much better than others, and everyone has their favourite. I, for one, think oat milk is by far the most elite alternative even tasting better than cows' milk. Not only does it actually taste so good, and doesn't do that awful lumpy splitting soya milk seems to do in my coffee, and it’s also great for the environment. Compared to other milks, oat milk has some of the lowest environmental impacts when it comes to emissions, land use, and water use, as the BBC reports.

Plant-based diets are on the rise in the UK, and so is the need for vegan-friendly food, and that includes a sweet treat. According to the Vegan Society, demand for meat-free food in the UK increased by a whopping 987% in 2017 and almost a quarter of people in Britain drank plant milk in 2019, up from just 19% in 2018.

For Oatly, being environmentally-friendly is something they stake their reputation on. In their 2018 Sustainability report, the independent company said: “animal-based products account for more than half (60%) of global food-related emissions and three-quarters of the land used for food production—but they only yield 18% of our globally consumed calories.” Now Oatly want to tie their efforts to the UN Sustainable Development Goals and highlighted the eight global goals they believe they can help with. They include, zero hunger, gender equality, affordable and clean energy, responsible consumption and production, and climate action to name a few.

So, while you’re chomping down on one of the new flavours of Oatly ice cream, you'll not only be satisfying your sweet tooth but helping support a pretty ethical product. Not bad for a tub of ice cream.