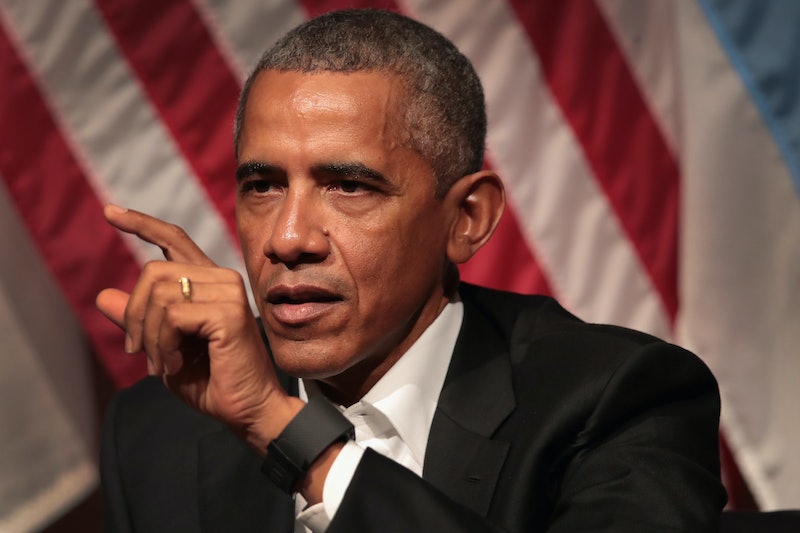 Jimmy Kimmel was the subject of endless headlines on Tuesday regarding an emotional monologue the late-night talk show host made on Monday's episode, in which he revealed that his new son Billy was born two weeks ago with congenital heart disease. After sharing the harrowing experience of spending three hours not knowing whether Billy would survive, Kimmel touched on the issue of health insurance plans not covering those, like his son, who have pre-existing conditions. The story got the attention of Barack Obama, who said Kimmel's son captures why the Affordable Care Act is worth fighting for on Twitter.

"Well said, Jimmy," wrote the former president in his retweet of Kimmel's post about the monologue. "That's exactly why we fought so hard for the ACA, and why we need to protect it for kids like Billy. And congratulations!"

Despite Trump's repeated promises that his Obamacare replacement plan would not take away insurance coverage from those with pre-existing conditions, the latest version of "Trumpcare" might do just that. The revised bill was immediately met with pushback from major health organizations, Democrats, and even Republicans. Republican Rep. Billy Long said on Monday that the new bill "strips away any guarantee that pre-existing conditions would be covered and affordable."

The president stated in an interview on Face the Nation that the bill had been changed to include pre-existing conditions, but while the language of the proposal has been changed to prevent Americans with such conditions from being denied insurance, it now includes an amendment allowing insurers and states to raise the cost of coverage for pre-existing conditions. This would inevitably leave a significant number of people unable to afford health insurance.

A common implication that members of the Republican Party and opponents of universal healthcare often make is that healthcare should only be affordable to those who make good decisions and work hard enough to have the money. Congressman Mo Brooks did just that on Monday when he suggested that people dealing with rising insurance costs are doing so because they made poor decisions which led to bad health.

The last minute of Kimmel's monologue is the perfect rebuttal to this line of thinking:

We were brought up to believe that we live in the greatest country in the world, but until a few years ago, millions and millions of us had no access to health insurance at all. Before 2014, if you were born with congenital heart disease like my son was, there was a good chance you’d never be able to get health insurance because you had a pre-existing condition. You were born with a pre-existing condition. And if your parents didn’t have medical insurance, you might not live long enough to even get denied because of a pre-existing condition. If your baby is going to die, and it doesn’t have to, it shouldn’t matter how much money you make. I think that’s something that, whether you’re a Republican or a Democrat or something else, we all agree on that, right?

Hard to imagine someone disagreeing with that.

More like this
'It’s A Sin's Real-Life Jill Has An Important Message About Monkeypox
By Sam Ramsden
A Political Thriller Inspired By The Munich Massacre Is Coming Soon
By Darshita Goyal
Courteney Cox Doesn't Remember Filming 'Friends'
By Jordyn Tilchen and Sam Ramsden
Which Cast Member of 'Westworld' Season 4 Has the Highest Net Worth?
By Meg Walters
Get Even More From Bustle — Sign Up For The Newsletter