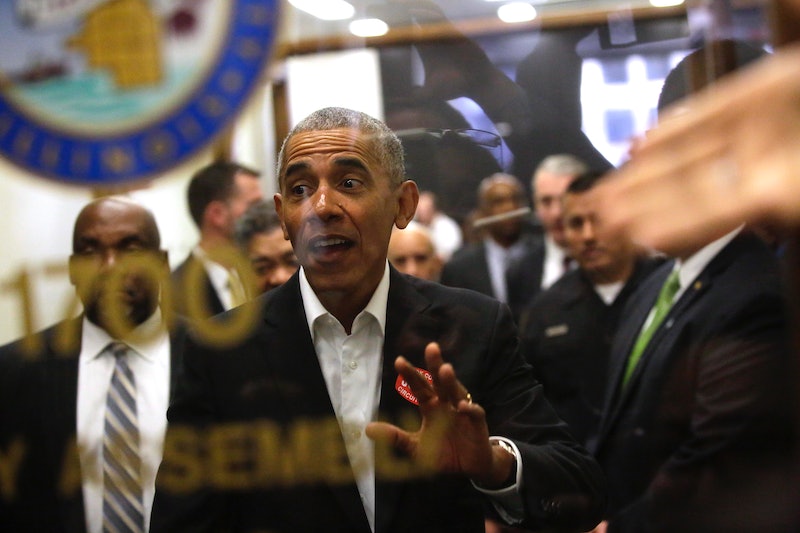 President Obama has mostly been out of the limelight since his term ended in January. Couple that absence with nostalgia for his administration, and anywhere he makes an appearance is a pretty big deal. Still, showing up at a Cook County courthouse in Chicago, as he did on Wednesday, is probably the last place you'd expect him. Obama, who was called for jury duty, was there to fulfill his civic responsibility, with a few autographs given and pictures taken along the way.

This was no ordinary day of jury service. Most Chicagoans would not be followed from their South Side home by helicopter. The former president was photographed leaving his house Wednesday morning with a coffee mug in his hand. Then news teams tracked the motorcade as it made its way downtown to the underground garage, connected to the Daley Center in the Chicago Loop.

The former senator from Illinois, who got his political start in the city, then took the elevator up to the 17th floor. Obama was met by not just court staff and other potential jurors but journalists, fans, and even the Chief Judge of the Cook County Circuit Court Timothy Evans. "How's everybody doing?" Obama asked the room as he entered, showing that even this civic duty can be done with a smile on your face.

"I don’t know of anybody who receives a summons from me and says, ‘Oh great, I get to serve jury duty,’” Evans joked with Chicago Tribune reporters. “I hope they can see that … if the former president of the United States takes his time to come, anybody ought to be willing to come.”

But for Obama it was rather easy. He arrived at about 10 a.m. and left by noon. He was dismissed from duty randomly.

The way it worked on Wednesday was that the summoned jurors were split into 16 panels at random. Then eight of those were selected to move on as potential trial juries, and the other eight were sent home. Obama's panel was one of the eight sent home, a spokesperson for the court told the Chicago Tribune. Thus it seems he wasn't dismissed for being president or for any other personal reason.

Before heading home, Obama made the most of it. He was greeted with applause as he entered the jurors' room. There were a total of 168 who had to show up on Wednesday. "Thanks everybody for serving on the jury, or at least being willing to," Obama was captured saying on video. "This looks like Chicago right here. I like that” He also shook a lot of hands and asked people how they were doing.

All jurors are paid about $17.20 by Cook County for their time. But that's barely enough to pay for one's parking (which the county jury duty website explicitly notes "you will NOT be reimbursed for") — and that's assuming you come without a motorcade. Obama's spokesperson told the Tribune that the money will be returned to the county. As a result of showing up and being dismissed, Obama is removed from the jury pool for one year.

Obama's jovial attitude may have made it seem like he wanted to be there, but not showing up was not an option. As the Cook County website warns, you don't want to be a no-show:

Failure to appear for jury service when summoned is a serious matter. You may be held in contempt of court which could result in a fine or other court imposed penalty. It is in your best interest to appear if you are summoned to avoid any further action.

That wouldn't be very becoming of the former leader of the free world. Plus, his showing up made jury duty more than worth it for 167 other Chicagoans.