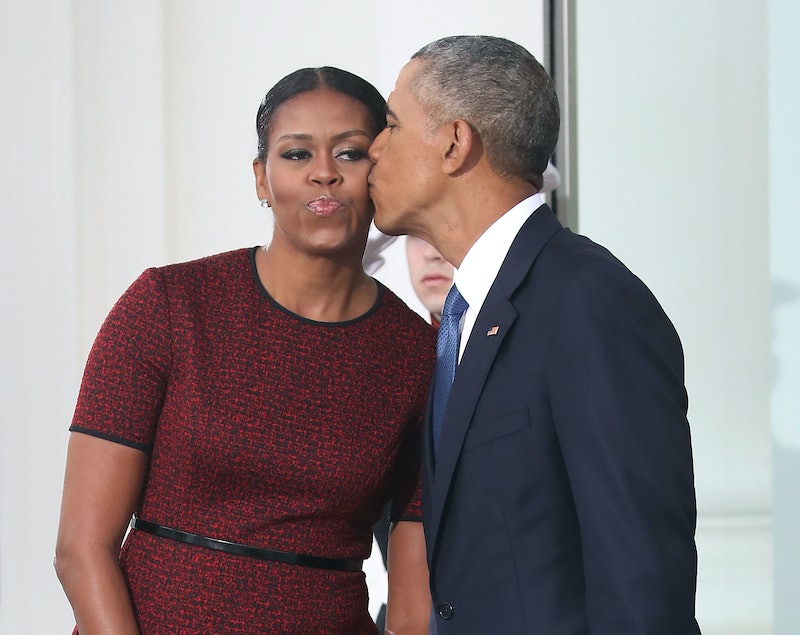 President Obama made it quite clear that he was a feminist while he still held the highest office in the land, and now that he's out of office, he hasn't quit pushing for female empowerment. In one notable instance of this at an event called Les Napoleons in Paris, Obama had a message for future female leaders: they need to run for office, because “because men seem to be having some problems these days.”

He made the comment in response to a question about leadership qualities necessary for the future, and his answer referred to the wave of sexual misconduct allegations currently sweeping the U.S. "Not to generalize but women seem to have a better capacity than men do, partly because of their socialization," Obama said at the event. He did not call out any of the men accused of sexual misconduct, instead emphasizing "the importance of more focus on putting women in power."

While Obama's words and the sentiment behind them were nothing new when he wrote them, it was certainly new to have the president of the United States saying them. Obama also worked to support women during his term in office in myriad ways, from his creation of the White House Council on Women and Girls in 2009 to all of his efforts to get equal pay for women. He also put his money where his mouth was, for example by nominating judges who were 50 percent female to positions around the country.

The environment now, of course, is different in countless ways. On the one hand, the culture has shifted enough that victims of sexual harassment and abuse have felt comfortable enough to speak out about their experiences in larger numbers than ever before, leading to an exodus of men accused of sexual harassment from high positions in Hollywood, newsrooms, and television studios across the country. Harvey Weinstein's ouster from his own company started an avalanche that hasn't stopped yet.

On the other hand, that wave hasn't quite hit politics. Trump has been accused of sexual harassment by numerous women, allegations that he flat-out denies. He's also thrown his support behind Roy Moore, the Alabama senatorial candidate accused of seeking sexual relationships with multiple teenage girls. On the political front, he's moved to stop the White House Council on Women and Girls' operations, and both his cabinet and his judicial nominees have features far less women than in administrations past.

With all of this swirling around, it's nice to hear Obama continuing to stand on the side of women, both in politics and otherwise. While he doesn't wield the political power that was once within his grasp, people still listen to what he and Michelle Obama have to say.

Through their new Obama Foundation, the former president and first lady are now working to empower future leaders from anywhere in the world — and while their mission statement doesn't say anything about supporting women in particular, comments like this should give female leaders plenty of reason to believe that they're coming to this cause with a feminist outlook. After all, what is feminism about, besides equality?