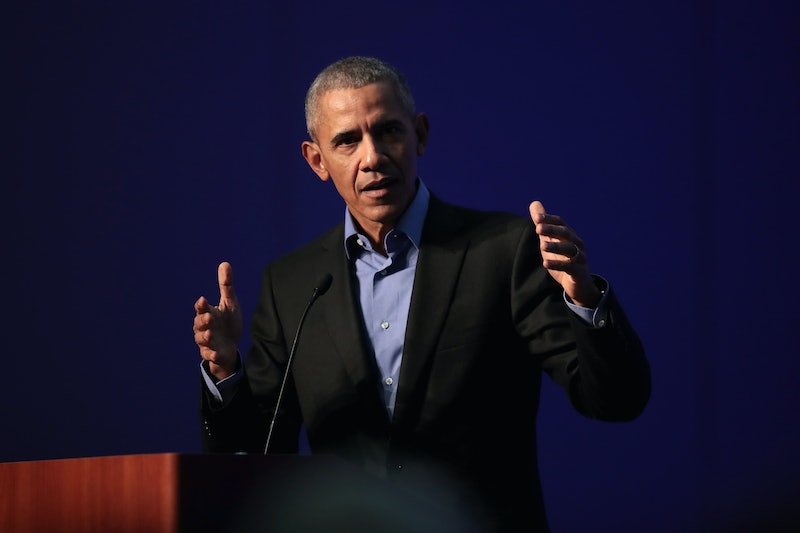 No matter where he's speaking, former President Barack Obama has a reputation for soliciting advice. This was certainly true this week when, speaking in South Africa, Obama urged more women to "get involved" in politics because, he said, men "are getting on my nerves."

"Women in particular, by the way, I want you to get more involved," Obama said while speaking at a town hall for young African leaders in South Africa, according to The Hill. "Because men have been getting on my nerves lately. I mean, every day, I read the newspaper and I just think like, brothers what’s wrong with you guys? What’s wrong with us?"

Getting more women involved in leadership positions and giving them a voice, Obama said, wouldn't just be good for women. According to the former president, it would be good for everyone.

"I think empowering more women on the continent, that... is going to lead to some better policies," he said, according to CNN.

Obama was in South Africa to deliver the 2018 Nelson Mandela Annual Lecture, which took place in Johannesburg. During his talk, he reflected on how Mandela's legacy impacted him as a young college student, and recounted the renowned leader's legacy.

"Madiba's light shone so brightly, even from that narrow Robben Island cell, that in the late '70s he could inspire a young college student on the other side of the world to reexamine his own priorities, could make me consider the small role I might play in bending the arc of the world towards justice," Obama said, evoking Mandela's nickname.

As part of his lecture, Obama made also comments that some construed as veiled criticism of his successor, President Donald Trump. Specifically, those comments regarded the propensity of politicians to flagrantly lie to the public.

"Unfortunately, too much of politics today seems to reject the very concept of objective truth. People just make stuff up," Obama said. He continued:

They just make stuff up. We see it in state-sponsored propaganda; we see it in internet driven fabrications, we see it in the blurring of lines between news and entertainment, we see the utter loss of shame among political leaders where they're caught in a lie and they just double down and they lie some more.

Obama's insight into falsehoods weren't the only comments some believed to be directed at Trump, either. Though he characteristically didn't name names or get overly specific, he also made remarks about "strongman politics."

"Strongman politics are ascendant suddenly, whereby elections and some pretense of democracy are maintained — the form of it — but those in power seek to undermine every institution or norm that gives democracy meaning,"

As for Obama's desire for more women to be involved in leadership, he may be in luck in the United States. Politico reports that 575 women have so far declared their intention to run for the House, the Senate, or for a gubernatorial position. Because of numbers alone, some have dubbed 2018 to be the so-called "year of the woman."

More like this
Iran Has Issued A Death Sentence Over Mahsa Amini Protests
By Catharina Cheung, Darshita Goyal and Maxine Harrison
What To Know About Martin Bashir After Watching 'The Crown'
By Bustle UK
Read Dan Levy's Heartbreaking Message After The Club Q Shooting
By Stephanie Topacio Long
Here's The Role Lady Susan Hussey Played At Buckingham Palace
By El Hunt
Get Even More From Bustle — Sign Up For The Newsletter