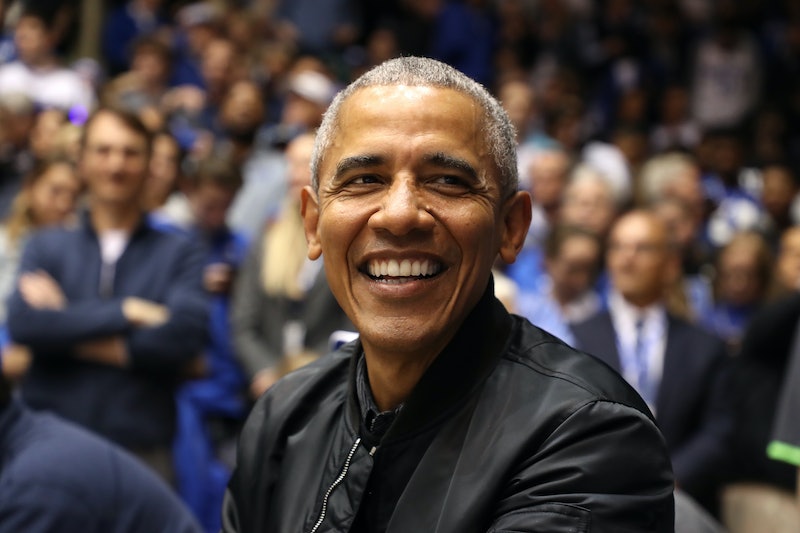 He might not be president any more, but he's still at the forefront of one particular trend: outerwear, apparently. While attending a much-hyped Duke-North Carolina NCAA basketball game on Wednesday evening, Barack Obama wore a bomber jacket with "44" embroidered on the sleeve. Although it wasn't the most subtle move the president has ever made, it certainly earned him some serious attention from the Twitter universe. After all, in a world dominated by navy and black suits and American flag pins, it's pretty refreshing to see a former president rocking a custom-made bomber jacket.

According to GQ, Obama's jacket was made and custom-embroidered by Rag & Bone, for the cool price of $595. The clothing brand's website describes the Manston Jacket as a "a traditional Japanese military nylon jacket with a two-way zipper at the center front and high-visibility orange lining." It's currently available in sizes from XS-XXL.

That might not be a cheap price tag, but it's technically a silver lining: You, too, can wear the exact bomber jacket Obama did, though it's safe to say you'll have to find your own embroidered nickname.

Unfortunately, Obama didn't make any statements about his extra swaggy evening. But you might be surprised to know that he's had the jacket for a while — in fact, he had it custom-made at the end of his second term, according to GQ.

To the publication, Marcus Wainwright, the founder and chief brand officer at Rag & Bone, explained of the creation, “The ‘44’ on the sleeve just felt like a subtle touch. Not many people could have pulled it off that way. He's got style.”

Wainwright further added that he had no idea Obama was going to wear the jacket in public at any point, let alone to massive college basketball game. Of the surprise, he said, "[It was] fun to wake up to that...he looked pretty f*cking cool.”

I hadn’t forgotten about it, but I wasn’t necessarily waiting...I wasn’t expecting him to wear it in public. I thought maybe he's wearing it on the weekends or at home. I was hoping that he was wearing it.

With that said, Wainwright has no intentions of selling a "44" bomber jacket so that people can wear exactly what Obama wore. “Listen," he said to GQ. "If I had ‘44’ jackets all over my website I’d probably sell a lot, but it's a one-off and that's what's special about it.”

Obama only tweeted once about his time spent at the basketball game on Wednesday — and that tweet, unfortunately, had nothing to do with his stellar outfit and everything to do with the surprise injury at the beginning of the game of top collegiate Duke player, Zion Williamson. Obama tweeted, "Zion Williamson seems like an outstanding young man as well as an outstanding basketball player. Wishing him a speedy recovery."

As for Wainwright, he seems pretty satisfied with how the evening played out. To GQ, he said, “Making a jacket for the president, that's f*cking awesome. How else can you put it? When they look good in it, it's even more gratifying."