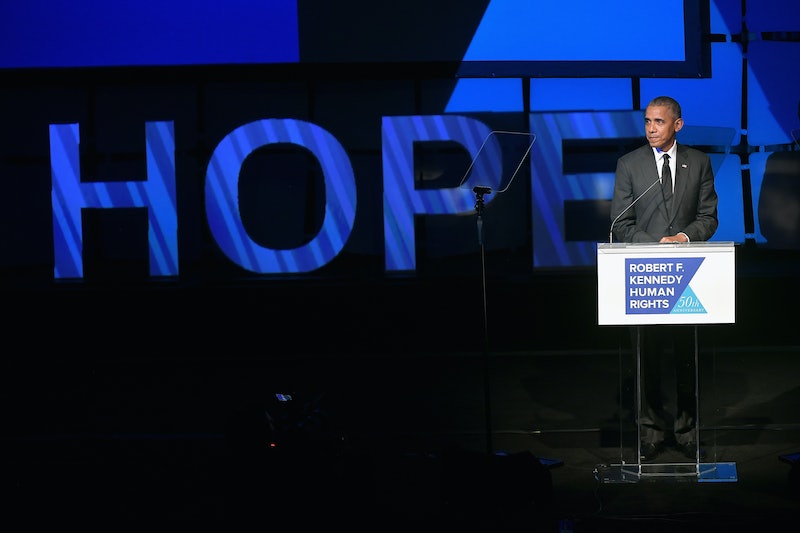 At a gala in Manhattan on Wednesday night, a former president was honored for his commitment to standing up to oppression in a nonviolent way. Barack Obama's Robert F. Kennedy Human Rights Award speech was just as inspiring as the award itself, and — as you might guess — it was all about the importance of holding onto hope. Given that Obama literally framed his first presidential campaign around that very notion, the award couldn't have been more fitting.

The honor, which is more specifically called the Ripple of Hope Award, is given out each year in the name of the late Robert F. Kennedy. Past recipients include Bill Clinton, Hillary Clinton, Robert de Niro, and Bill Gates. According to the Associated Press, Obama said in his opening remarks, “I’m not sure if you’ve heard, but I’ve been on this hope kick for a while now. Even ran a couple of campaigns on it. Thank you for officially validating my hope credentials."

He then continued to talk about the importance of holding onto hope and rejecting cynicism, even in the darkest of times. He said:

If we summon our best selves, we can inspire others to do the same. It’s easy to succumb to cynicism, the notion that hope is a fool’s game. When our leaders are content on making up whatever facts they want, a lot of people have begun to doubt the notion of common ground. Bobby Kennedy’s life reminds us to reject such cynicism.

Obama's comment on current leaders making up "whatever facts they wanted" wasn't exactly subtle. The former president has grown increasingly outspoken against the current administration, after being silent during the first years of Trump's presidency. Obama finally broke his silence in September, releasing a fiery speech at the University of Illinois in which he condemned the "politics of division, resentment, and paranoia" of the current Republican Party.

"Appealing to tribe, appealing to fear, pitting one group against another, telling people order and security will be restored if it weren’t for those who don’t look like us, that’s an old playbook," Obama said at the time (via RollingStone). "It’s as old as time. And in a healthy democracy, it doesn’t work."

On Wednesday evening, Obama's speech was rife with optimism and honesty. Though he wasn't afraid to acknowledge the sobering times that exist politically in the nation right now, he also went out of his way to remind people of how much progress has been made in recent times.

"The story of the last 50 years is the story of a more just and peaceful world," he said. "I have seen it. I have lived it. You have too."

On Wednesday, Obama took to Twitter, writing once more about the critical importance and power of hope, and to honor the lasting legacy of Kennedy. He wrote,

As Bobby Kennedy taught us, the thing about hope is that it travels through space *and* time, first splashing against the rocks, but eventually breaking down the walls of cruelty and injustice. And if we do our best with the time we’re given, others will take hope in our example.