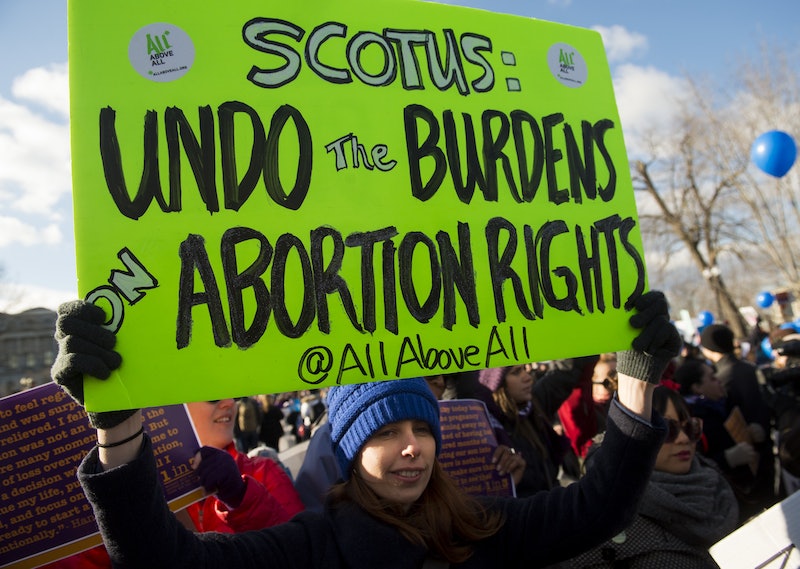 A 2014 law limiting women's access to medication abortion was permanently overturned in a court ruling on Tuesday, the Associated Press reports. Oklahoma's Supreme Court medication abortion ruling overturned a five year-old ban that prohibited the "off-label" use of the drug mifepristone, per the AP, allowing prescribers to use an updated 2016 protocol.

"It’s crucial that patients receive truthful, accurate, evidence-based information about their health care,” Danielle Williams, co-board president for Oklahoma Call for Reproductive Justice (OCRJ) said in a press release. “This restriction was sold as a measure to protect women’s health, but in reality it would have forced doctors to administer triple the necessary dose of medication abortion drugs."

Under the law, which then-Gov. Mary Fallin signed into law in April 2014, according to Rewire.news, it would have been illegal to use mifepristone for off-label purposes. According to the Guttmacher Institute, the off-label usage incorporates a lower dose of mifepristone, fewer doctor visits, permits patients to take the drug at home, and allows for the process to be used up to nine weeks of gestation.

Instead, Rewire reports, doctors would be required to prescribe medication abortion based on an FDA protocol first issued in 2000. The law has been blocked several times as it faced repeated legal challenges, per the AP.

That older protocol, Mother Jones reports, requires two different drugs to be used during medication abortions — mifepristone is one of them — and also dictates that patients undergo three separate visits to the doctor. The medications prescribed under that FDA protocol are also given to patients in higher dosages, and Mother Jones reports that the older method is often more expensive to administer.

"The legislature's requirement that physicians adhere to the FDA's 2000 label protocol for medication termination, rather than the more effective current 2016 label protocol, places a substantial obstacle in the path of a woman's choice and imposes an undue burden on the woman's rights," the court filing said.

Ultimately, the state's court ruled that "the law of the land [is] that a woman has a constitutionally protected right to make an independent choice to continue or terminate a pregnancy before viability."

The Oklahoma Supreme Court's ruling marks a victory for abortion rights advocates while they face challenges in a multitude of other states. As the Trump administration has made clear that it supports limiting access to abortion care, anti-choice politicians have pushed — and, in some cases, passed — abortion restricting legislation at a near-regular pace.

To be certain, virtually all of those initiatives have faced legal pushback upon becoming law. But challenging such laws can be a lengthy process, as evidenced by the nearly five-year battle over medication abortion in Oklahoma, making it difficult to predict a final outcome in such cases. Plus, it's possible that the lawmakers who fought to put such restrictions in place may not be around by the time a court makes its decision. (In the Oklahoma situation, for example, the governor who signed the bill into law isn't even in office anymore.)

Despite the challenges, abortion rights advocates have made clear they're willing to take the fight for access to the courts. And as a result of such a battle in Oklahoma, the access to medication abortion in the state has been reaffirmed.