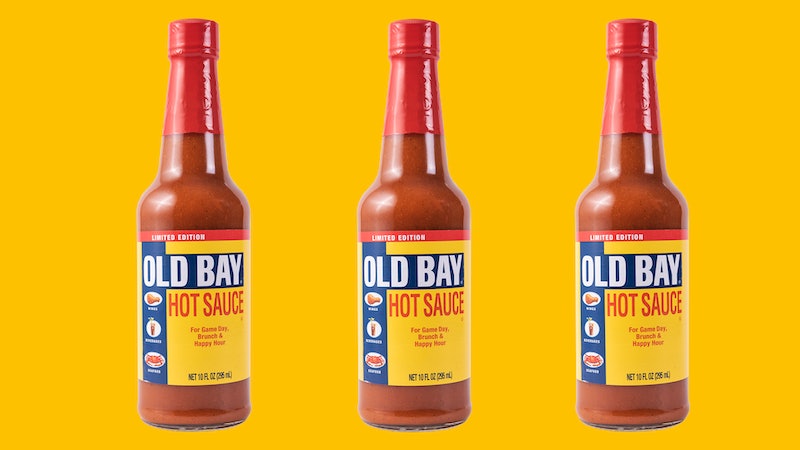 Thank your spicy stars because Old Bay Hot Sauce is back. After an initial launch back in January that sold out in less than 24 hours, Old Bay Hot Sauce is available for purchase once again. Of course, you’ll need to get yours quickly since supply is limited and the hot sauce hive does not come to play.

Remember way back in January when there was joy and happiness and we had the capacity to care about new product launches? It feels like eons ago, I know. That’s when Old Bay Hot Sauce took the internet by storm. Old Bay sent the tweet that launched a thousand spicy ships announcing the arrival of Old Bay Hot Sauce. The tweet went viral. The hot sauce sold out in less than a day. The internet was crushed. Even Mindy Kaling couldn’t place her order in time and was left, like many of us, sauceless.

As of Monday, June 29, you can bless your wings, your bloody marys, your buffalo chicken dips with the glory that is Old Bay Hot Sauce because it’s finally back in stock. If that sounds even remotely intriguing, you’ll want to get yours quickly lest you be left sauceless yet again.

“When we first launched this special, limited Old Bay offering in early 2020, we were excited to see the amazing response it received. We knew our loyal Chesapeake-area fans would embrace this hot sauce as the winter escape it was intended to be, however we quickly discovered that fans all over America, and even the world, were seeking it out. We’ve been fielding requests for its return ever since,” Old Bay spokesperson Jill Pratt said in a press release. “Old Bay fans are extremely passionate and loyal, so we are happy to let them know our hot sauce is back for this summer.” Passionate and loyal is an understatement. They are dedicated to the sauce. They live and die by the seasoning. Customers literally crashed Old Bay’s website they were so excited about this sauce.

If you live on the east coast, you’re in luck. Starting next week, you’ll be able to find the limited-edition Old Bay Hot Sauce at select retailers like Acme, Harris Teeter, Price Chopper, Publix, Safeway, ShopRite, and Wegmans. As for the rest of us, Old Bay Hot Sauce is available online through Old Bay’s website. But according to a brand representative, they’re currently pretty low in online inventory. (East Coast stores are still very much in stock.)

A 10 oz. bottle of the hot sauce runs for around $3.49. If you, like many hot sauce fanatics, did not come to play, you’ll probably be interested in the 64-oz. bottle of Old Bay Hot Sauce, which retails for $18.95. Spice gods forbid you miss out on the limited-edition sauce yet again, you’ll probably be able to find people selling Old Bay Hot Sauce on eBay. However, they’re being sold at a pretty steep upcharge. Unless hot sauce is priority number one. In which case, $17.99 is a small price to pay for the special sauce.

A blessed hot sauce to one and all.