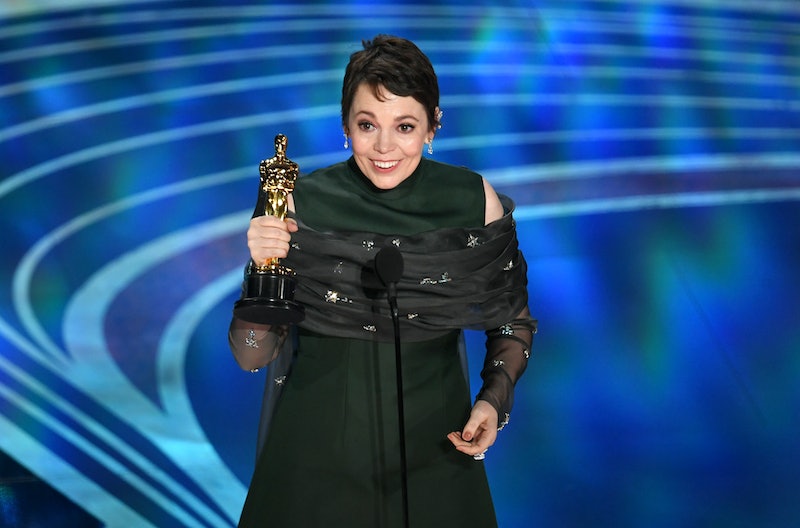 The competition, as always, was fierce, but only one leading lady could ultimately take home the Academy Award for Best Actress. This year, the 2019 Oscar went to The Favourite star Olivia Colman, and her acceptance speech was funny, emotional, and so incredibly all over the place in the best way possible.

In addition to Colman, the other nominees for Best Actress included Melissa McCarthy (Can You Ever Forgive Me?), Yalitza Aparicio (Roma), Lady Gaga (A Star Is Born), and Glenn Close (The Wife). Several outlets predicted that either Close or Colman would take home the statuette, but — as any loyal awards season viewer knows all too well by now — you always have to be prepared to expect the unexpected.

When Colman took the stage to accept her award, she was, in a word, shook. "Ooh, it’s genuinely quite stressful," she said, her eyes beginning to well up with tears. "This is hilarious. I have to thank lots of people," she continued. "If, by the way, I forget anybody, I’m going to find you later and I’m going to give you a massive snog. And I’m really sorry if I might forget now."

The first-time nominee then went on to thank the film's director, Yorgos Lanthimos, and her co-stars, Emma Stone and Rachel Weisz: "the two loveliest women in the world to fall in love with and to go to work with every day," she told the audience. "I mean you can imagine, it wasn’t a hardship," she added, drawing laughs from her peers.

Next, Colman thanked some of her fellow nominees, beginning with Close. According to Harper's Bazaar, Close has been nominated a whopping seven times, and is currently the most nominated actor alive to have never won an Oscar.

"Glenn Close, you've been my idol for so long, and this is not how I wanted it to be, and I think you’re amazing," Colman said to her peer. "I love you very much." For what it's worth, Close didn't look too bummed — not in front of the cameras, at least — and appeared to genuinely get a kick out of Colman's flattery.

The 45-year-old star began the conclusion of her acceptance speech by thanking various members of her team, the film's crew, her parents, and her kids — "who are at home and watching," she mentioned, "but if you’re not then, well, kind of well done," Colman jokingly addressed them. "I sort of hope you are. This is not going to happen again." Fair, but also, never say never!

One of the best moments in Colman's speech came towards the end, though, shortly after she was attempting to give some inspirational advice to "any other little girl out there who's practicing their speech on the telly." Apparently, the star was given the "time to wrap it up" signal, which she called out and then replied to by making a fart noise — as well she should have (see photo below).

Finally, Colman thanked her husband, Ed Sinclair. "My best friend, I love you so much, 25 years you’ve been my best supporter, and he’s going to cry!" she said. "I’m not," she joked, despite the fact that she'd pretty much spent the entirely of her speech fighting back the pools of tears in her eyes.

The whole thing was incredibly endearing and her win was incredibly well deserved. Here's to hoping everyone replies to the Academy's "wrap it up" signal with an equally effective fart noise from now on.