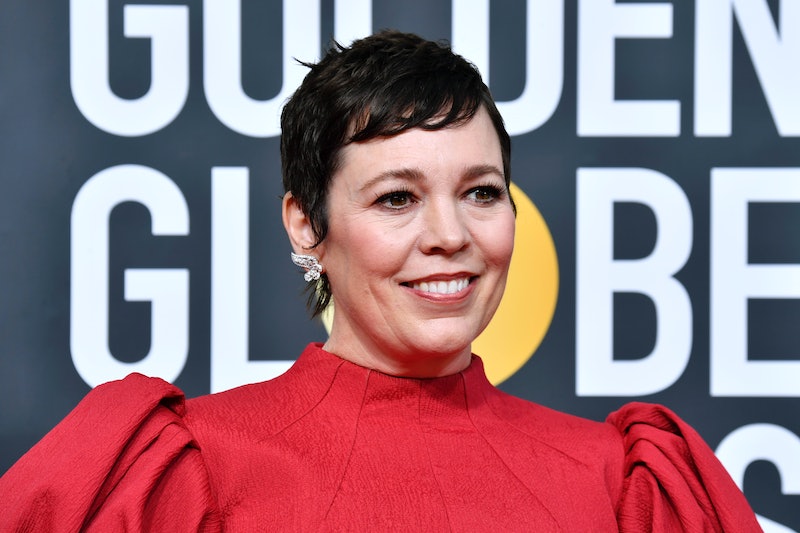 The queen has spoken, and once again, she's knocked it out of the park. Olivia Colman's 2020 Golden Globes speech for Best Actress in a Television Series stole the show, even though she was far from prepared. For the second year in a row, Colman charmed her way through an impromptu acceptance speech, making it abundantly clear that this is one actor who doesn't need a script to perform.

Colman, who won the Golden Globe for her role as Queen Elizabeth in The Crown, started off her speech strong, thanking Netflix and the Hollywood Foreign Press Association before letting out a flustered sigh. "I don't know what to say," she confessed, "Because I genuinely... I'd already gotten a little bit boozy because I thought this wasn't going to happen. Thank you... completely stumped."

The actor, who also had a role in Golden Globe winner Fleabag, made sure to give the show a shoutout before taking a moment to appreciate all of the celebrity guests. "Honestly, sitting there and watching everybody, it's so exciting. We've gone, 'Look who it is! Look who's there!'" She may not have been prepared, but Colman remains the queen of giving relatable award show speeches. (Remember her 2019 Oscars acceptance speech?)

Colman's charm is so infectious, her 2020 Golden Globes speech has already become a meme, thanks to Netflix's official Twitter account.

Of course, the streaming hub isn't the only one loving Colman's on the fly speech, with many on Twitter calling it a highlight of the night.

As long as Colman keeps acting, it looks like she'll keep winning awards, which means that this hopefully won't be the last time we get to experience a wonderfully thrown together acceptance speech.

More like this
Melanie Lynskey Plays A “Ruthless Leader” In 'The Last Of Us'
By Brad Witter
Pedro Pascal Barely Got Through The "Lisa From Temecula" 'SNL' Sketch
By Stephanie Topacio Long
Grammys Host Trevor Noah Made Adele's Dream Of Meeting The Rock Come True
By Brad Witter
Keyla Monterroso Mejia Is Finally The Star Of The Show
By Gabrielle Bondi
Get Even More From Bustle — Sign Up For The Newsletter
From hair trends to relationship advice, our daily newsletter has everything you need to sound like a person who’s on TikTok, even if you aren’t.