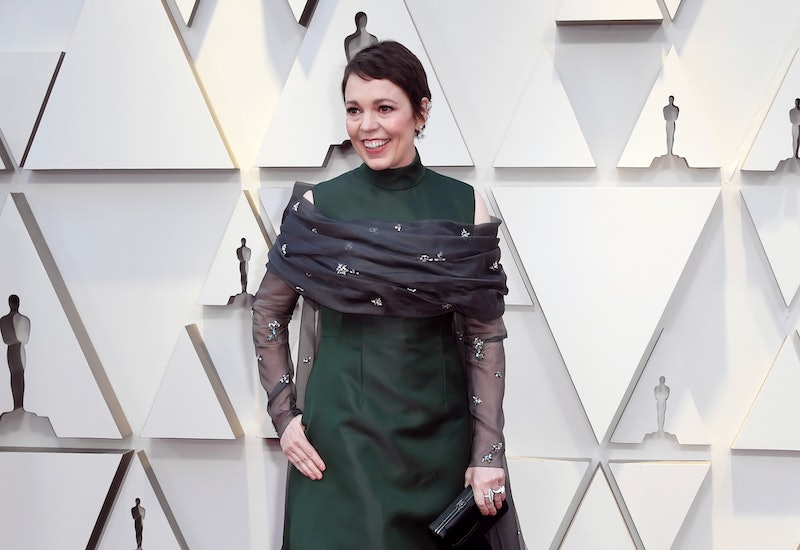 The Oscars is the one night of the year where celebrities can really go all out. But it can also be a daunting experience for those who aren't quite so comfortable on the red carpet. Finding an outfit that allows you to feel like your best self is important for most A-listers. And it goes some way to proving why Olivia Colman's Oscars dress had pockets.

On Sunday, the 45-year-old won the Best Actress award for her masterful role as Queen Anne in The Favourite. While her speech was something to be admired (she literally said on stage, "This is hilarious"), Colman's emerald gown was the real talk of the night.

Created by Prada, it featured a sleeveless turtleneck design and an organza cape that transformed into a huge bow at the back and was decorated with Swarovski crystal flowers. But the most impressive part would have been a secret if Colman hadn't so obviously revealed its presence on the red carpet. Unlike many Oscars dresses, hers came with useable pockets, allowing her to pose in front of photographers Colman style.

“I have never felt confident having to do any photographs or red carpet,” the actress told the New York Times earlier this month. “Being someone else is easy; being me is torture during those events.”

Colman clearly isn't a fan of the glitzy appearances that come with her job, so it makes sense that she wanted to wear something that would calm her nerves during the Oscars. Pockets do just that, giving people an easy place to put their hands during photo calls.

Colman's stylist, Mary Fellowes, has discussed exactly how the gorgeous gown came to life. As Vogue reports, it all started in Palm Springs in January. Fellowes and the actress were in a car looking at Prada references and trying to come up with Colman's dream dress. She knew she wanted two things: a dark hue and bows. “Prada sent back a series of mind-blowingly beautiful sketches," Fellowes told the magazine.

The road to get to Prada, however, wasn't as smooth as you may have expected. In an interview with the New York Times, Fellowes explained how some fashion houses didn't give a "satisfying response" when asked to dress Colman for red carpet events. It wasn't until the actress began winning big awards that designers were queuing up to dress her.

So Fellowes and Colman decided they wanted to choose a brand that had values the actress admired. According to the New York Times, these included strong associations to families and working mothers as well as a link to sustainability. Prada fit the bill perfectly.

The newspaper reports that the resulting dress took a team of eight people 120 hours to create. (The embroidery took even longer at 300 hours.) Colman also wanted to pay homage to her regal roles — both in The Favourite and her upcoming one in The Crown. When she saw a 2015 Prada collection had bows similar to the garters that British monarchs wear, she asked if Prada could include such a detail in her Oscars bag, reports Vogue. And the designer happily obliged.

Although the addition of the pockets hasn't been openly discussed, it's likely that Colman requested them. After all, they suit her down-to-earth nature perfectly. All hail our honorary Queen.