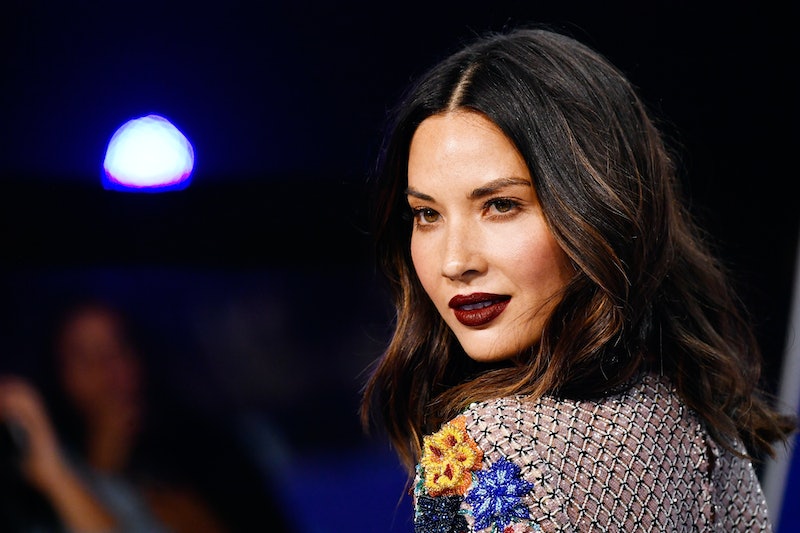 It's a truth universally acknowledged that if you are alive today, at some point or another, you've cared a bit too much about what other people think of you. And that is entirely understandable. Thanks to a bombardment of media tempting us to look and act a certain way, the various cliques and social circles of adult life, and of course, social media and all the FOMO that comes with it, it would be pretty dang astounding if you truly didn't care about the opinions of others. But Olivia Munn, the 37-year-old actor who stars in the upcoming Lego Ninjago Movie, out now, has some critical advice for anyone who's ever questioned their decisions for fear of the crowd's reaction.

Sitting on a Lego-red couch at the Legoland Hotel in Carlsbad, California, the actor explains that because of her upbringing in a military family, and because of how often her family moved from town to town, she was often the outsider in school. "When you go into the cafeteria room, figuring out who you sit with at lunch is the worst. I never ever had anyone to sit with because I was the perpetual new girl. But it really built me up for life, toughened me up, and I'm in a place now where I look back and appreciate it, but it wasn't easy," she says.

When you learn not to care you have a lot of energy for other stuff that will stay with you for the rest of your life.

For Munn, being the new girl often meant a lot of undeserved judgement, and the hardest part was learning not to care about what other people thought of her. Even now, years out of school, she still holds onto the lessons she taught herself when it comes to simply not giving a damn.

But simply deciding not to care is a task that is much easier said than done, and Munn knows this. In order to help train herself to shift her mentality, the actor devised a pretty awesome hack.

"It's really hard to not care, so make a deal with yourself: Every hour that you spend caring about those people, you have to spend an hour learning another language, learning an instrument, or do something to give back to yourself," she suggests.

And the logic behind Munn's thinking makes a whole lot of sense. "When you learn not to care you have a lot of energy for other stuff that will stay with you for the rest of your life... all that extra time that you would spend caring, spend it on something else."

There are only so many hours in the day, so next time you find yourself worried about things out of your control, like what someone thinks of you, or how you might be perceived in any given scenario, do as Munn does: Try to channel that mental energy into something productive and useful. It might take a few stabs before it becomes second nature, but after a while you'll be fluent in a new language... or whatever form your newfound free time might take.