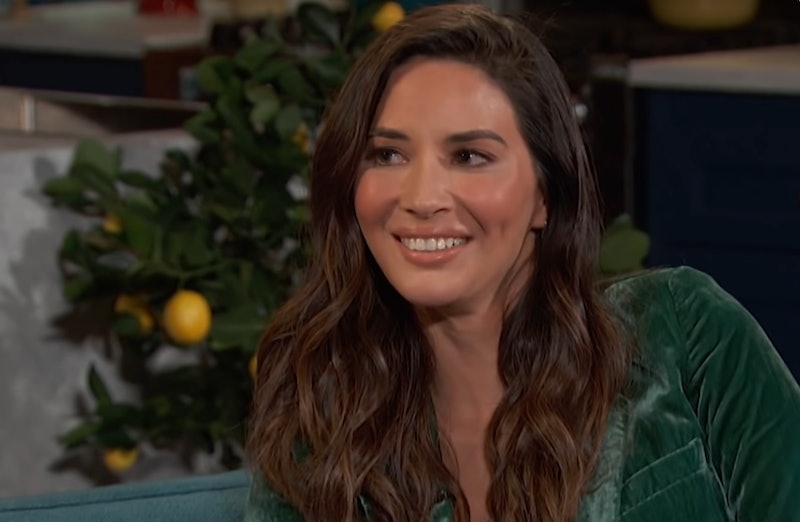 Feeling down about dating? Been staring at your phone waiting for someone to text you back? Wondering when you and the person you've been seeing are going to make it official? Well, guess what? Celebrities have all of those same insecurities, too. A few months into a new relationship, Olivia Munn got dating advice from Jamie Foxx, which she revealed during an appearance on Busy Tonight on Tuesday night. Foxx had some wise words for his famous friend, and they ended up teaching her a powerful lesson about self-respect.

Munn and Busy Philipps, actor and host of Busy Tonight, go way back. They've worked on a few projects together over the years, but one project, in particular, led them to Foxx's house.

"It was such a magical afternoon," Philipps said of collaborating with Foxx that day. "But you and Jamie, have you worked together, or are you just buds?" the host asked.

"We met at a party through our agents, and it was at the Super Bowl," Munn explained, "and he just became like a big brother to me, immediately. He’s been such a great friend."

The 38-year-old actor then went on to describe a time when her "big brother" gave her some really sage advice. Munn had been secretly dating another celebrity for a few months, she explained, but they hadn't discussed whether or not they were exclusive yet. At one point, they both ended up at the same party, but Munn got bummed out seeing him flirt with other girls.

"I was feeling like, so depressed," Munn told Philipps. (Been there.) She was so upset, in fact, that she had decided to leave the party early. Foxx was also there, though, and figured out what was going on right away. He said he'd call her in the morning — which he did — and his advice to her came in the form of a voicemail.

Damn straight. That is the truth. Foxx's advice was totally legit, and definitely something that everyone should try to keep in mind. "It was so sweet and he was just so earnest," Munn told Philipps of her friend.

While Foxx's wise words did help Munn in the moment, she admitted that she still slipped up from time to time when it comes to guys. See? Celebrities are just like us. Nobody's perfect, of course, but if you're dating someone who makes you feel small — well, just imagine a very angry Foxx leaving that voicemail on your phone.