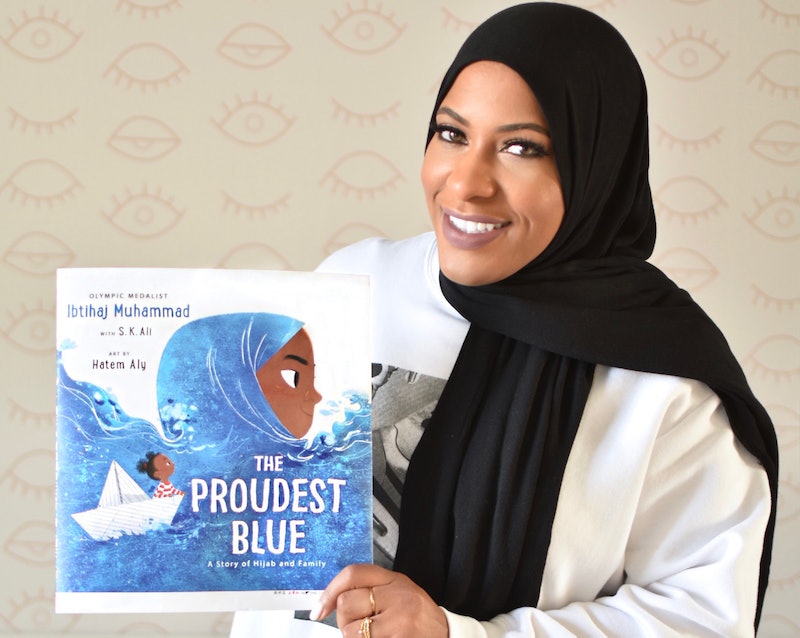 Fencer Ibtihaj Muhammad made history in 2016 when she became the first hijab-wearing U.S. athlete to qualify for the Olympics and the first Muslim-American woman to medal at the games. But the road to Olympic greatness wasn't easy; as she writes in her memoir, Proud, she experienced rampant racism and xenophobia, even among the elite athletes she trained with and competed against. In her new children's book, The Proudest Blue, Muhammad writes a story about two sisters and the beauty of their faith. Bustle spoke with Muhammad about her forthcoming book, and the message she hopes to send to children.

"My hijab brings me closer to God and reminds me to lead every step with faith," she tells Bustle.

The book — co-written by S.K. Ali and illustrated by Hatem Aly — follows two sisters on their first day of school. The older sister, Asiya, selects a hijab that is "the brightest blue" for the first day of class. "Asiya's hijab is like the sky on a sunny day," her little sister, Faizah, says. When the two arrive at school, they are greeted by students with ignorant, xenophobic opinions about the hijab. But the two sisters share a tight bond, and they know the beauty of their religion and hijab.

The children's book goes on sale on Oct. 22, 2019, but you can pre-order it now. Below, read an exclusive interview with Ibtihaj Muhammad about her inspiration for the book.

Bustle: What inspired you to write The Proudest Blue?

Ibtihaj Muhammad: One of the earliest and most powerful forms of representation for children comes through reading. I wanted to tell this story so that young children that look like me could see themselves in a picture book. So that children of color, Muslims, and both (like me) know they aren’t alone and that there are many out there with a shared experience. It’s important that children of color see themselves represented in literature. Representation matters.

One of the earliest and most powerful forms of representation for children comes through reading.

Since my time at the Olympic Games, I have seen a lot of young Muslim girls inspired by my story and motivated to be more involved in sports. It is often difficult to see yourself in spaces where there is little to no representation. I hope that seeing me become the first Muslim woman to win an Olympic medal for our country inspires more of us to embrace the power of difference and to be the first at something as well.

Did you experience harassment or violence as the result of wearing a hijab as a young girl?

I remember being bullied and made to feel different because I wore hijab. It took me a long time to come to a place where I could brush off the looks and ignore the bigoted comments. It can be difficult to navigate spaces when you’re made to feel different, but one of the greatest gifts you can give yourself is to love yourself as you are and push past society’s limited expectations of who you are.

"It is often difficult to see yourself in spaces where there is little to no representation."

What do you say to primary and grade schools that attempt to ban the hijab?

Any school no matter the grade level that attempts to ban religious headwear is violating our Constitutional rights as Americans. Similar to the wearing of crosses on a necklace or yarmulkes, the hijab is a symbol of a person’s devotion to their faith. A rule banning hijab specifically, would be enacted based out of fear and prejudice, another example of bigotry and hate that we collectively must work to rid from our society. I’m proud to have the freedom to wear what I want and each of us is deserving of that right to wear what we want. That message is one of the many reasons I felt compelled to write The Proudest Blue. I’m excited to put this story out into the world with the help of S.K. and Hatem.