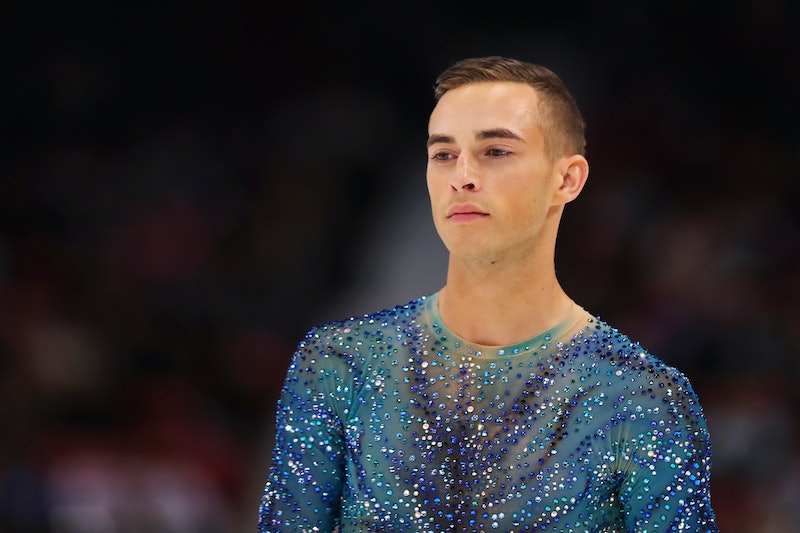 Over the years, there has been a steady spotlight on women and the unfair body pressures that society has put on them. Because of it, society as a whole has started to slowly embrace body diversity and body positivity, doing everything from easing up on Photoshop, including different body types in ads, and even holding industries notorious for promoting unhealthy body expectations accountable. But during this re-education, not as much attention has been put on men and their body pressures. That is partly the reason why Adam Rippon recently shared that he had an eating disorder with The New York Times, a diagnosis he says is due to the extreme pressures of figure skating culture. Now, Rippon says he wants to help others by speaking out.

The New York Times reported how in 2016, when 1988 Olympic champion Brian Boitano crossed paths with Rippon and asked him how he was doing, the response he got was surprising. Rather than talking about his rising career, Rippon instead answered, "I’ve never been thinner.”

At that time, his meals consisted of three slices of whole grain bread with I Can't Believe It's Not Butter thinly spread across, and a few cups of coffee to keep the hunger at bay.

In the interview, Rippon shared that he felt extreme pressure to keep a slight frame in order to better appeal to the judges. He mentioned how he would look at his fellow Olympic teammates, like teenagers Nathan Chen or Vincent Zhou, and feel self conscious of how much smaller their bodies were compared to his. There were skaters that were 10 years younger than him, a foot shorter, and with bodies half his size, and so he felt the pressure to diet in unhealthy and drastic ways.

The shocking part was that he had felt this pressure ever since he was an adolescent, and not just when he went pro. According to the Times, Kelly Rippon, Adam’s mother, remembered when his first coach, at 10 years-old, told her that her son would be better suited for speedskating since his "heavy bottom" wouldn't let him pull off advanced jumps.

The Times also reported that Boitano remembered how judges would come up to the skaters and suggest they lose a few more pounds in order to get higher scores. He himself had been asked to do the same even when his body fat was at four percent.

“If judges tell you to lose weight, you don’t have time to figure out how do it healthily," Boitano shared with the Times.

Eating disorders in the world of figure skating isn't news, but previously the main focus of concern was aimed at only female athletes. Canada's Gabrielle Daleman, part of the women's single free skating team, recently shared with HuffPost Canada how her first eating disorder developed in the fifth or sixth grade.

"There would be points when people would call me too muscular, too fat, so there would be times when I wouldn't eat, or when I did eat I wrote down the calories and then I would burn that off, and then burn double it," she said.

Because Daleman was a gymnast during childhood, she alleges it was constantly reinforced her body type wasn't ideal for figure skating, and so she needed to drastically change it.

"I have broader shoulders than most figure skaters," Daleman told HuffPost. "I have muscles, I have bigger legs, and so it was, 'You're not pretty enough, you're not graceful enough.' It was just a whole list of stuff."

Other skaters have also felt the pressure, like Japan's Akiko Suzuk, who was diagnosed with anorexia after she lost nearly a third of her body weight in two months. But while many female athletes have come forward with their experiences, male athletes haven't been able to share and get support in the same way.

Rippon decided to get help and see a sports dietitian when, last year, he broke his foot while hopping to warm up his legs. Because he wasn't getting the proper nutrients, Rippon's bones became frail and he got a stress fracture that led to a break. It was a wake-up call.

And with that wake-up call, he decided to speak out in order to help others in sports who might be suffering in silence with their own conditions. Rippon says he hope he can help shine a light on the unfair pressures and bring about change. And it certainly seems he's started an essential conversation with his harrowing story.