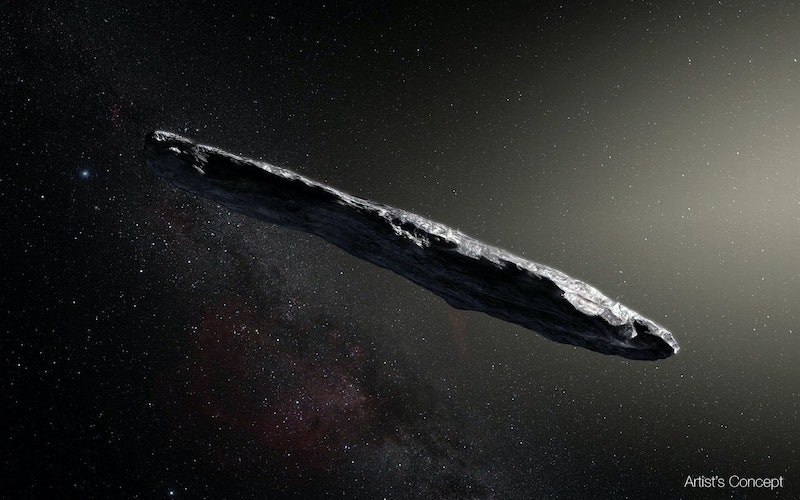 It looks like Earthlings will not be taking any alien visitors to their leaders any time soon. According to astronomers at Yale University and the California Institute of Technology, the mysterious ‘Oumuamua interstellar space object might be a comet after all, according to YaleNews, and not an alien spacecraft like Harvard astrophysicists theorized. Scientists were originally baffled by the way ‘Oumuamua continued to accelerate without the help of the sun’s gravitational pull, says YaleNews, which is why people have been lingering on the alien-life theory for since 'Oumuamua was first spotted in 2017. But researchers now say the reason ‘Oumuamua keeps moving is pretty simple: it’s venting gas that was heated by the sun, according to YaleNews — kind of like an intergalactic space fart.

The Yale and Caltech study, which will appear in the Astrophysical Journal of Letters, says ‘Oumuamua is a comet that has been experiencing “outgassing,” says YaleNews, something that’s pretty common for comets. Usually when a comet goes by the Sun, it heats up and erupts an ice jet, and the comet tail forms when dust particles get caught up in that ice jet and reflects sunlight, according to YaleNews. But with ‘Oumuamua, researchers haven’t seen evidence of a comet tail or the spin that is usually caused by an ice jet, says YaleNews.

“In the model we’re proposing for ‘Oumuamua, the venting gas does not erupt from a single fixed point on the surface,” Yale astronomy professor Gregory Laughlin told YaleNews. “Instead, the jets migrate along the surface, following the warmth and tracking the direction to the Sun.” The researchers say that means ‘Oumuamua isn’t spinning like a typical comet, says YaleNews; it’s rocking back and forth like pendumlum.

Some in the scientific community say this new research makes sense. “The [study’s] overall reasoning seems sounds, and the results are a really good match to the observed characteristics of ‘Oumuamua,” Marco Micheli, a scientist at the European Space Agency told Scientific American. But others still aren’t convinced that ‘Oumumua is a comet. “It does not look like at least 99.999 percent of the solar system’s comets,” Avi Loeb, astrophysicist at Harvard University, also told Scientific American. Loeb is also one of the scientists who thinks ‘Oumuamua might be an alien artifact.

Oumuamua was first discovered in the fall of 2017 and is the first space object scientists confirmed has come from another star to visit our neck of the galaxy, according to NASA. But 'Oumuamua’s shape and size — an oblong, cigar-shaped object around a quarter of a mile long — was surprising to scientists, says NASA, because it was unlike any other object they’d seen in our solar system. University of Hawaii researchers were the first to discover the object, says YaleNews, and they named it 'Oumuamua, which is Hawaiian for “scout.” Because of 'Oumuamua’s weird shape and odd behavior, scientists continually reclassified it and updated their theories, first classifying it as a comet, then an asteroid, and then an interstellar object, according to YaleNews.

We’re now back to comet, so who knows how long this theory will stick and if space gas is really the reason why ‘Oumuamua is really moving the way it is. Space truly is an incredibly mystery, and this visiting space object is proof that there’s so much we don’t know about the world around us.