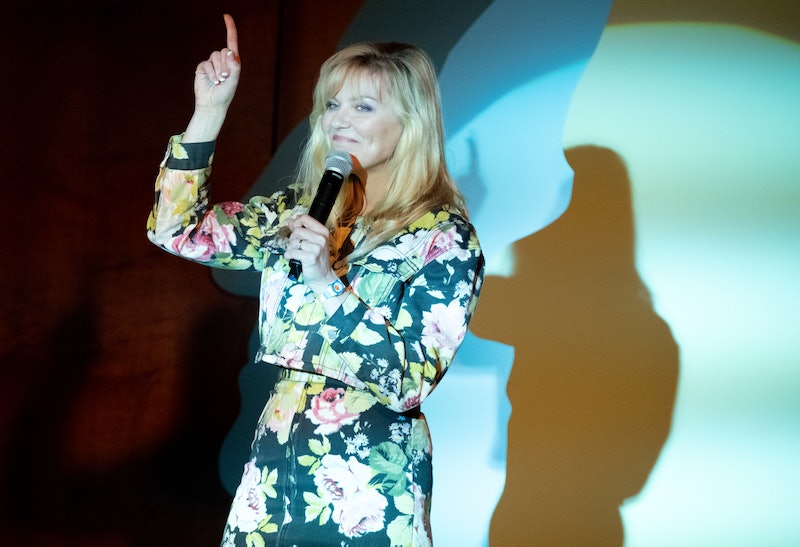 On Becoming A God In Central Florida isn't actually about becoming a literal god, but the power that multi-millionaire Obie Garbeau II has — the same power that Kirsten Dunst's Krystal strives for — is certainly as God-like as one can get in Central Florida. On Becoming A God In Central Florida isn't based on true story, and the company at the show's center, Founders American Merchandise, is fictional as well, but the show will feel real to anyone who has worked for or known someone who works for a multi-level marketing company.

At the beginning of the show, Krystal's husband Travis (played by a mustachioed Alexander Skarsgård) is in deep with FAM, listening to motivational tapes from the company's leader, Obie Garbeau II and desperately trying to push FAM product so he can quit his J-O-B (FAM members seem to treat the word "job" as an expletive) in his attempt to get his family a yacht and achieve the American Dream. He even brings in his recruiter, Cody, to have conversations with Krystal when his efforts to sell FAM goods keep him from being able to help pay the mortgage or care for this child.

Krystal, Travis, Cody, and FAM are all fictional, but the way that companies structured in the same way as Founders American Merchandise can take over people's lives is entirely based in reality.

"I had never really read anything about Multi-Level Marketing," Dunst said in an interview with BUILD Series, talking about how her research into the role of Krystal led her to be concerned about MLM practices. "People put all their money into these things and they're left with nothing. It's really heartbreaking and it destroys lives." The Federal Trade Commission reports that 99% of MLM recruits lose money, and Travis certainly isn't in the 1%. While MLM's work for very few people, the profit earned from the people who lose their own money is reportedly so valuable that people who buy in are pressured into continuing to sell at the expense of their own well-being.

An anonymous former seller for LuLaRoe, a clothing company modeled in a similar manner as many other MLM's, told Quartz that she had been urged to "stop paying my bills to invest in more inventory" and get rid of her television and her vehicle to try and make up money lost on her purchase of goods she was unable to sell.

"I just had to get on anxiety meds over all of it because I’ve started having panic attacks." The same feelings that this seller has for LuLaRoe seem to be mirrored by On Becoming A God, which depicts FAM as an exploitative business that suckers folks such as Travis and Cody into dedicating their life to a corporation that has given them meaning in exchange for profit, while people like Krystal suffer the consequences of her husband being seduced by someone selling him the American Dream in bad faith.

There are very real consequences to putting too much of one's finances into an MLM structure — as depicted in On Being A God through Travis' unending desperation and anxiety to make a significant sale at the behest of his recruiter — but the series takes those darker realities and paints them in bright colors and soundtracks them with glossy '80s hits. The show is a sharp, incisive takedown of real MLMs and the culture that allows them to flourish.

More like this
Josh Peck Shows Love To Jennette McCurdy After Her Shocking 'iCarly' Revelations
By Radhika Menon
At 14, D'Arcy Carden Was Sneaking Out To Parties & Crying Over Kurt Cobain
By Ivana Rihter
'Yellowjackets' Just Announced Who’s Playing Adult Van & It’s Perfect
By Gretchen Smail
Steve Martin Hints That He May Retire After 'Only Murders In The Building'
By Jake Viswanath
Get Even More From Bustle — Sign Up For The Newsletter