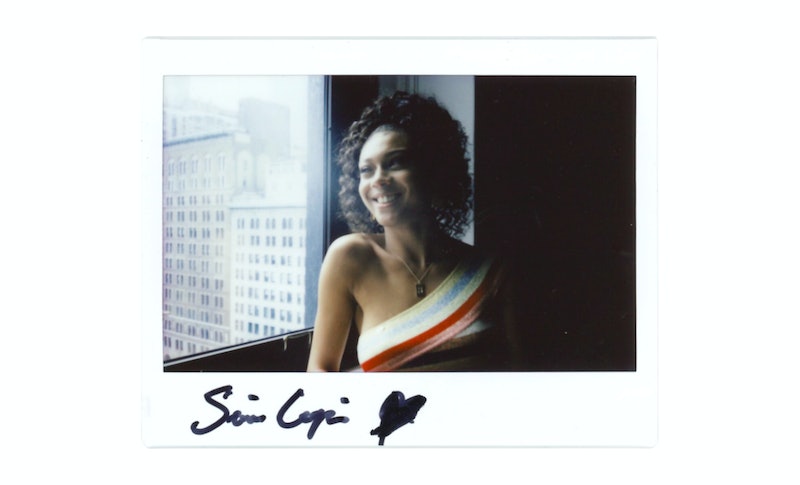 When celebrities hang out with Bustle editors, we want to give them the chance to leave their mark. Literally. So we hand them a pen, a piece of paper, a few questions, and ask them to get creative. The rest is up to them. This time, On My Block star Sierra Capri is leaving her mark in the Bustle Booth.

Initially meeting Sierra Capri, star of Netflix’s hit series, On My Block, my first inclination is to hug her. I've met iterations of her character, Monse Finnie, my entire life. In her curls and her kicks, I see my younger self reflected in such a visceral way that I want to protect both Monse and Sierra, the way big sisters often do. From brown girl to brown girl, we excitedly hug family reunion style. She lets me know that she's honored to represent the teens of color — past and present —on screen.

"I'm just glad that we're able to represent kids who don't get a voice," Sierra says. Equal parts street and book smart, Monse rules the roost as the girl in her all-male, all-teen angsty, Freeridge squad. But Sierra emits nothing but girl's girl glam, with her vibrant neon jumpsuit reflecting the New York City sun.

She's all giggles and excitement when we discuss her favorite show. "I really wish Power would come back," she says, lighting up when I confess it's one of mine, too. As we get into real talk about Ghost, Tommy and Angela, our exchange is similar to the way fans express their love for Monse, Jamal and Cesar.

But just kicking it with the guys is brand new to the star — Sierra has always been very much one of the girls. "All my friends are girls from school, and I just got asked to be a bridesmaid at my best friend's wedding," she shares. It's hard to picture Monse tasting wedding cakes and giving her Project Runway take on bridal gowns, but it's clear that Sierra is excited for every flowery tradition.

When it comes to identity however, she is lockstep in portraying Monse's nuances. Although Sierra isn't Afro-Latinx, as a biracial American, the mixed race experience is one she knows firsthand. "I can 100% identify with not knowing where you fit in," she tells me. "I had that period between middle school and high school where I wasn't accepted by one end because I was too this or I wasn't fully accepted by the other end of the spectrum because I was too that. I took a lot of life experiences when playing Monse and figuring out how to deal with [that dynamic]."

On My Block has been met with critical success and a feverish fandom that includes teen viewers, and a legion of millennials excited for such honest representation. On My Block flips stereotypes like a Bravo housewife flips a table.

As On My Block awaits the green light for Season 3, Sierra is just taking the time to do Sierra. Read on to find out more about her first crush and her on-point emoji drawing skills in the Bustle Booth.