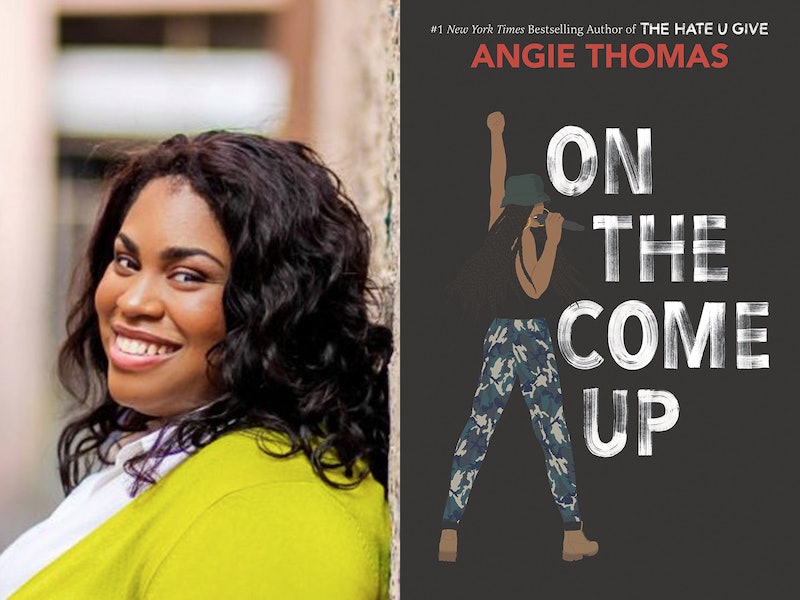 Angie Thomas is speaking up. She's done it before, of course, in her wildly successful debut YA novel, The Hate U Give. That story — which follows 16-year-old Starr Carter, the sole witness to the fatal shooting of her unarmed friend Khalil at the hands of a police officer — has remained on The New York Times bestseller list for 100 weeks, was a 2017 National Book Award finalist, and was adapted into a 2018 film starring Amandla Stenberg. Now, Thomas is using her latest release, On the Come Up, to broaden the conversation.

The Hate U Give has its fair share of detractors, many of whom point to the book's discussions of drug use and gang violence as a reason to keep it out of the hands of young adults. These attempts at censorship directly inspired the plot of On the Come Up, which delves into issues of addiction, gang culture, racism, and more. This time Thomas is talking about them through the lens of hip-hop.

"Everything that people said they loved about The Hate U Give, I did the opposite. That was my goal."

"I went in knowing that I wanted to do a book about hip-hop, but I didn’t go in knowing that I wanted to do a book about freedom of speech," Thomas says. "I thought about hip-hop a lot as I was dealing with [The Hate U Give censorship] because so many of my favorite rappers have dealt with attempts to censor them. Tupac dealt with it. Kendrick Lamar deals with it now. I’m not the first one to go through this, and I won’t be the last. Because unfortunately when Black people — and young Black people specifically — speak up and make others uncomfortable, we’re suddenly a threat, we’re suddenly the enemy, we’re suddenly problematic. The challenges against The Hate U Give really pushed me to make this a story about speaking out, even when the world is against you."

On The Come Up follows 16-year-old Bri, who wants to be one of the greatest rappers of all time. But as the daughter of an underground hip hop legend who died right before he hit big, Bri has got massive shoes to fill. When she gets into an altercation with a security guard at her school, and her mom suddenly loses her job, Bri pours her anger and frustration into her first song. It goes viral — for all the wrong reasons. Soon, Bri is in the center of a controversy that forces her to decide whether she is willing to become the very thing the public has made her out to be.

'On The Come Up' by Angie Thomas
Amazon

Thomas was a teen rapper herself, though, she says, "I didn’t get very far with my rap career, if you could even call it a career." Thomas never performed in rap battles like Bri, but she did dust off her old rhyming skills to write all of Bri's freestyles in the book. And she used her own teenage experiences as inspiration for Bri's hip-hop aspirations, too.

"I thought about why I wanted to be a rapper as teenager, and it was because I thought that it was way to make it out, and it was a way to express myself," Thomas says. "A lot of kids want to be rappers and many times when adults found that out they’re like, ‘Oh, why would you want to do that? You could do something better.’ But what’s wrong with it being a way for them to speak for themselves and make themselves heard? I wanted to pay respect to that, and pay homage to hip-hop as an art-form."

"I thought about why I wanted to be a rapper as teenager, and it was because I thought that it was way to make it out, and it was a way to express myself."

Like Starr, Bri deals with the realities of being young and Black in a society where racism is ingrained. But in On the Come Up, Thomas also uses Bri to examine the consequences of speaking up at a more micro level — with family, friends, and peers.

"Sometimes the hardest criticism that you can receive is not from strangers, it's from the people you love," Thomas says. "It was important to write a young woman who is going to make mistakes, who is going to say things that she probably shouldn’t say, but showing that she should not be demonized for it. We see that through Bri's family and friends, who say, ‘We might not always agree with the way you do things, but we love you regardless.’ We’re all growing, we’re all learning and I want to show my readers that you can listen to others, and you can take criticism, but you also have to stay true to yourself. I hope they walk away feeling a little more empowered."

"We’re all growing, we’re all learning and I want to show my readers that you can listen to others, and you can take criticism, but you also have to stay true to yourself."

Thomas doesn't shy away from discussions about being a young Black woman, especially in the world of rap, either.

"With Brianna entering a industry that is so male dominated, she has to hold her own, and sometimes she comes up against people’s stereotypes of ‘Oh, she’s being a girl. Oh, she’s being hormonal.’ But what’s wrong with being a girl? What’s wrong with being passionate about something?" Thomas says. "I really wanted to speak to all of that in the climate we’re in where more women, and more young women of color, are speaking out and making themselves heard in the face of being written off as a stereotype."

Thomas adds that her third (and she says likely final) book to take place in the world of Garden Heights will center on a character that readers have already met. But after that, Thomas hopes to dive into a very different genre.

"I’m definitely going to do something lighter at some point, I have to. I wish I could have had The Hate U Give when I was a teenager, but I also would have loved to have had the Black girl version of Twilight, or a book like To All the Boys I’ve Loved Before," Thomas says. "I definitely hope to write fantasy, so that I can show these young Black kids that they can be heroes, too. Black Panther started it, but I want to continue it. I hope we [keep getting] to see Black kids and Latino kids and Asian kids and Native American kids and LGBTQ kids just being their authentic selves without worrying about the struggles of the world. I hope publishing allows us to have our happy stories, too."