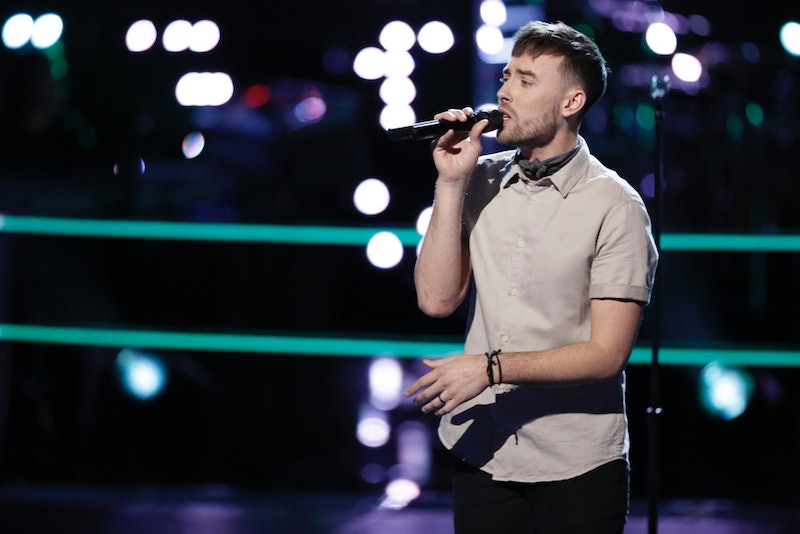 If you want to know what a winner looks like, then right now on The Voice it may look a bit like Hunter Plake. Plake's Knockouts performance on The Voice on Monday night was a compelling mix of instrumental showcasing and vocal skills pushed to the next level. Plake not only proved that he was worthy of being chosen for Team Gwen for another week, but also that he might actually be the most sensitive bae in contention for winning Season 12 of The Voice.

For his Knockouts performance, Plake chose "I Want To Know What Love Is" by Foreigner. The iconic '80s synth slow jam was revealed to not only be a part of Gwen Stefani's "Make Out playlist" (TMI, girl), but a great way for Plake to show off his more sensitive side. We saw touches of it during his battle round last week, when he sang Robyn's "Dancing On My Own," but this Knockouts performance took him to a whole new level.

In rehearsals, Stefani was in love with Plake's rendition of the Foreigner classic. That said, she did urge him to watch for not letting a "pinched" quality come through in his voice in favor of letting that air fill up his diaphragm and bring out the richness in his voice. Stefani also encouraged him to open up, noting that he could leave the piano and move around to help let his contemporary take on this song soar.

Plake's performance was haunting, full of magnetic energy, and simple all-encompassing. Truly, it was hard to look away. He earned an enthusiastic "Yeah!" from coach Alicia Keys – a rare reaction from her — and coach Blake Shelton appeared enthralled. There were traces of James Blake's stirring, tenor in Plake's more electronic-influenced performance. There was also DNA of Foreigner in there, with Plake's plaintive, heart-wrenching, sensitive as hell refrain.

On Monday night, Plake asked what love looked like and he got his answer: everyone falling head over heels for his Knockouts performance.