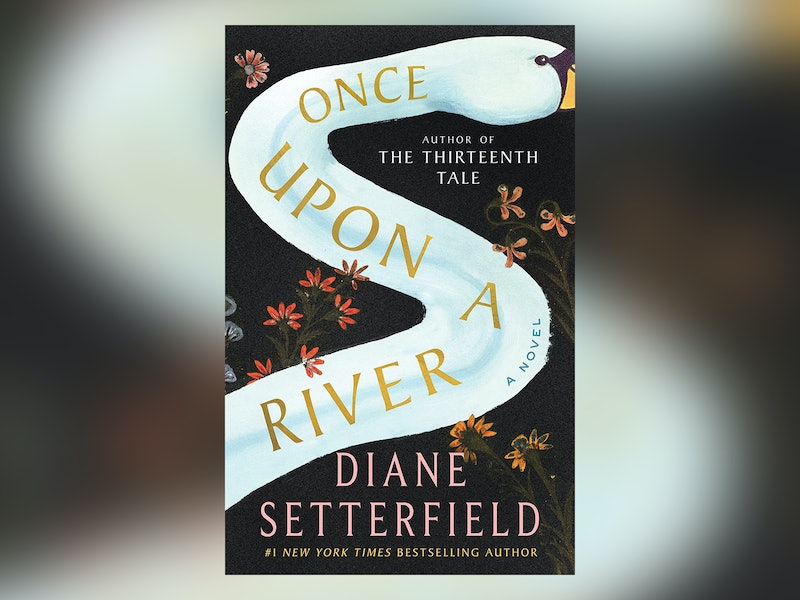 Stories and storytelling are fundamental parts of the human experience. They are how we share information, how we teach lessons, how we connect with one another across time and space. Our unending desire for stories reveals one of the most basic needs humans have been trying to meet for centuries: understanding. But why do we tell them? Is it to entertain, to inspire, to instruct? Is the purpose of storytelling to change either the teller of the tale or listener? It was Joan Didion who probably put it best when she wrote in her 1979 collection The White Album that “We tell ourselves stories in order to live.” It’s a profound sentiment, and one that can be felt on every page of bestselling author Diane Setterfield’s latest book. A gorgeous novel about life, death, and the mysterious space in between, Once Upon a River explores the many ways in which stories can not only keep us hopeful, but how they can keep us alive.

Once Upon a River opens on a particularly dark and cold midwinter night at the Swan at Radcot, an ancient inn along the Thames river known not for its fine ales or comfortable lodgings, but for its storytelling. For over five centuries, the Swan has been the place for people to come and gather and experience great stories and the people practiced in telling them. But on this particular evening, as the regulars trade tales late into the night, something happens that is far stranger than any of the stories they’ve told before: A stranger, soaked through to the bone, bursts through the door with the lifeless body of a small child in his arms. The man, unrecognizable to everyone at the Swan, is gravely injured, and the girl he carries is dead. Or at least, she was dead until Rita, the local nurse and midwife, arrives at the inn to treat the man’s injuries and pay her respects to the deceased child only to find the child is once again alive.

'Once Upon A River' by Diane Setterfield
Amazon

“As is well-known, when the moon hours lengthen, human beings come adrift from the regularity of their mechanical clocks. They nod at noon, dream in waking hours, open their eyes wide to the pitch-black night. It is a time of magic. And as the borders between night and day stretch to their thinnest, so too do the borders between worlds,” Setterfield writes. Is it possible magic is at work at the Swan, or is there some unknown scientific reason the child, who hours before appeared dead, was very much alive? Rita can’t be sure, and neither can the witnesses at the inn that night, but one thing is clear: the girl’s resurrection will make a truly titillating story. The visitors at the Swan are “collectors of words the same way so many of the gravel diggers were collectors of fossils. They kept an ear constantly alert for them, the rare, the unusual, the unique.” Of course, it doesn’t get much more unique than the stunning story of a dead child come back to life.

By the next morning, the miraculous tale of what happened at the Swan has snaked its way up and down the Thames, where it is told and retold to the townspeople. The story of the undead girl is passed on to Mr. Armstrong, a black farmer and devoted family man who is determined to meet and love the granddaughter his troubled son has kept secret from him. It's told to Mr. Vaughn and Helena, his young wife who is still struggling with the aftermath of their daughter's kidnapping. It's shared with Lily White, the the parson's housekeeper and mysterious widow of Basketman's Cottage still mourning the loss of a sister long gone.

Soon enough, all three parties arrive at the Swan to claim a little girl they believe to be theirs, each one carrying with them a different story of love, loss, grief, and hope. Before anyone can get their happy ending, though, there are mysteries to be solved, identities to be uncovered, and previously unheard tales that need telling. But things are far more complicated than they seem, and like the tributaries that feed into the river Thames, there is always more: “What we see on a map is only the half of it. A river no more begins at its source than a story begins with the first page.”

When you pick up Once Upon a River, a story that straddles the line between reality and fantasy, between science and the supernatural, between the land of the living and the unknown terrain of the dead, you won't be able to help being swept away like a lone twig caught in the current of the Thames. It's an enchanting novel that not only tells a beautiful story, but tells of the beauty of stories themselves.

Richly steeped in folklore and magical realism, Once Upon a River is a deeply moving novel about love and loss, about family and community, about magic and science and that mysterious space between life and death. But most of all, it is a novel about stories, the ones we tell ourselves every day and the ones we choose to share with others.