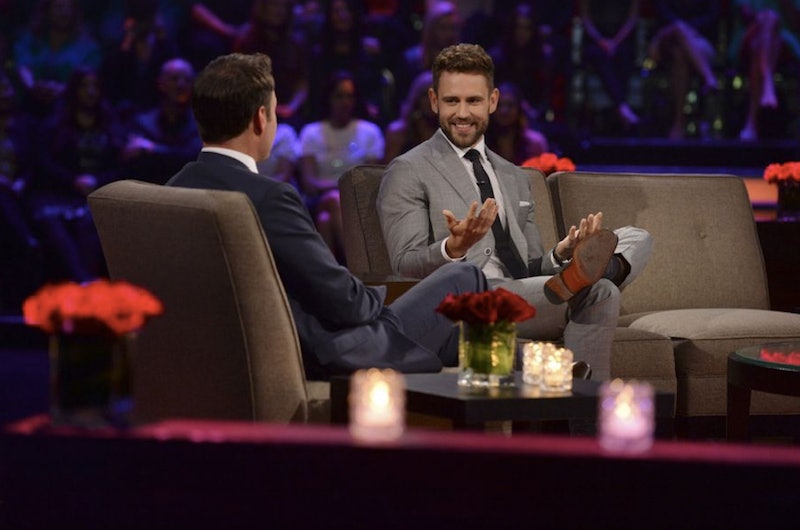 E! caught contestants Alexis Waters, Danielle Maltby, Kristina Schulman, and Corinne Olympios to see if they'd be game to go to Mexico and continue looking for love. The most enthusiastic was Waters, who hoped a majority of the "fun" group of girls from Viall's season would join. "I feel like we're all going... Hell yeah, I'm so down for it. I want to do it so bad," she said. "We'll see if I'm still single. I feel like I came out of the womb for Bachelor in Paradise." Maybe someone would appreciate her shark costume more than Viall...

Waters was all giggles when asked about possibly kindling a romance with Johnson, if she joins the season. Although the internet has officially deemed Johnson "the villain" of Fletcher's season, after beefing with contestants and punching a metal door, Waters is far from writing him off. "I think Chad is kind of funny," she said. "It's bad!" Johnson will be back in Paradise from Season 3, so, if he's planning on laying down some moves towards Waters, it's likely he won't waste any time. He knows how this thing goes by now.

The other women seemed to be on the fence about returning. Matlby, who's a nurse, expressed concern about taking more time off from her job. "My job is everything to me and they are so good to me... so I don't know. I don't want to do anything that would put my job in jeopardy," she said. "It would depend on the caliber of men." Fair.

Schulman also had mixed feelings, saying, "I'm open to it, but I'm not relying on that to find a person for me." And, although the internet is convinced Olympios will join, she hasn't confirmed anything. "I don't think so... I wasn't even asked yet, so let's not jump the gun yet," she said. "It's too early to tell right now."

It's yet to be determined how this will all play out, but, in the meantime, I'll leave with this: all is fair in love and shark costumes.