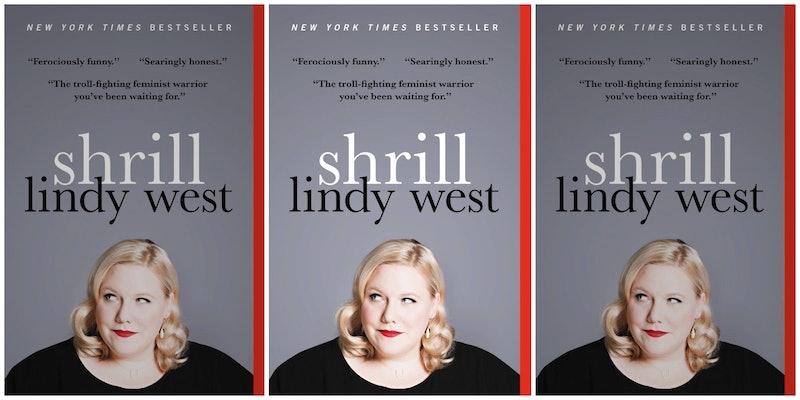 As I was getting ready for my first vacation of 2018 recently, I had to do what I dread doing every year: go bathing suit shopping. As I stood in front of the dressing room mirror taking in the vision of myself in a two piece suit that seemed to hug me in "all the wrong places," I resisted the urge to look away and instead forced myself to take in every perceived imperfection. I studied my stretch marks, ogled my shape, and stared at my love handles until I truly loved them, just like comedian, activist, and author Lindy West taught me. I have spent most of my life searching for body confidence, and I finally found it waiting for me in West's remarkable 2016 memoir, Shrill.

Even if you haven't read her memoir, you've probably seen Lindy West's name somewhere before. A contributing opinion writer for the New York Times with bylines everywhere from GQ, Vulture, and Cosmopolitan to The Guardian, Jezebel, and NPR's This American Life, West has established herself as one of the most distinctive, not to mention hilarious, voices on the internet. In her fiercely feminist writing, she uses a potent blend of heartfelt humor and cutting criticism to get at the hard to reach, even harder to confront issues facing our culture, including sexism, misogyny, fat acceptance, racism, reproductive rights, and more.

What I have always admired in West is her fearlessness, or rather, her ability to identify what others think should scare her — internet trolls, modern romance, her own body — and, instead of turning away, run directly at it, shouting through her megaphone the whole way. One of the most notable aspects in her writing is that it does more than merely observe or criticize: it urges both personal and social change. In her columns, and in Shrill, West doesn't just condemn the ways in which our culture seeks to destroy fat women or disparage internet trolls from their misogyny. She actually tries to give readers the knowledge and the power they need to change them.

That's exactly why I picked up Shrill. I knew from following West's writing for so many years that her memoir wouldn't just make me laugh, but that it would challenge my thinking and force me to confront the negative views I had on body image. As a straight sized woman, I haven't had the same exact experiences as West, nor have I had to endure the kind of hatred she and other fat women endure on a daily basis. My body allows me fly under the radar in public: People do not feel it necessary to comment on my size or my health, it isn't difficult for me to find nice clothes that fit, and it has been easier for me to come to terms with my size, because although I am self conscious about my fat rolls and my stretch marks, they fall under the category of things that are "socially acceptable." Still, as a woman in this culture, I think it is impossible not to feel badly about your body or your size, and I just didn't want to feel that way anymore. I wanted to know how West was so happy, so proud, and so confident in her skin.

When I read Shrill in 2016, it felt like, after a lifetime of treading water in the pool of self-hate and body shaming, I finally had a life raft to cling to. As is true with her columns and other writing, West's memoir, which is in the form of interconnected essays, brims with humor, heart, and authenticity. Throughout Shrill, West dissects the ways in which our culture has been shaped to hate women for being.

In the chapter titled "You're So Brave for Wearing Clothes and Not Hating Yourself!" West answers the question she says she is asked most often: "Where do you get your confidence?"

Her unexpected answer blew me away:

"For me, the process of embodying confidence was less about convincing myself of my own worth and more about rejecting and unlearning what society had hammered into me.

"Honestly, this “Where do you get your confidence?” chapter could be 16 words long. Because there was really only one step to my body acceptance: look at pictures of fat women on the internet until they don’t make you uncomfortable any more. That was the entire process.

When I read that passage, I was truly floored. People talk about having "ah ha" moments, but I don't know that I had one before this. Suddenly, I started to see that the hatred I harbored for my body wasn't necessarily my own, it was a product of the society I lived in. Could it be possible that I just hadn't been seeing the world through the right lens? All around me, I saw skinny women with perfect skin and impeccable style, and thought, I can never be them, which means I will never be beautiful. But here was West, telling me beauty existed in pictures of fat women on the internet, so maybe it could exist in me, too.

Of course, as West goes on to explain, loving your body and all of its beauty isn't actually that easy. For West, it took a lot of time, personal introspection, and Leonard Nimoy's Full Body Project to realize, with the help of gorgeous black and white photos of fat, naked, and happy women, that her body wasn't something to be ashamed of, to hide, or to hate. "It was the first time I’d ever seen fat women presented without scorn. I clicked, I skimmed, I shrugged, I clicked away," says West. "I clicked back."

Seeing the subjects of Full Body Project to West was like Shrill has been to me. It unlocked something inside the writer and helped her realize her body wasn't something she had to hide by turning the lights off during sex, or disguise under ill-fitting clothing. Here on the screen in front of her (and later, in front of me) were fat women who were smiling, and not because they were told to for the camera, but because they truly loved the skin they were in. In each image was gorgeous woman with obvious control and power over her body, a woman who wasn't trying to find superficially flattering angles that hid her fat rolls or baggy clothes that covered her stretch marks. In each image was a woman unhidden, unafraid, unashamed.

For West, it was the "ah ha" moment that helped her realized she didn't have to hide, be afraid, or be ashamed, either. As she explains in Shrill:

"What if my body didn’t have to be a secret? What if I was wrong all along – what if this was all a magic trick, and I could just decide I was valuable and it would be true? Why, instead, had I left that decision in the hands of strangers who hated me?

It was such a simple maneuver, but so profound. Nimoy said of his models, “I asked them to be proud”. For the first time it struck me that it was possible to be proud of my body, not just in spite of it. Not only that, but my bigness is powerful."

When I read this passage in Shrill, I found myself asking a series of questions like, Why do I think my love handles are gross looking? and Why do my stretch marks make me cringe? I followed West's advice, spent hours staring at pictures of fat women on the internet from Nimoy's project and beyond, and I came to the same conclusion West did: it's because I've been conditioned to.

As West has written about at length, there are a lot of problems with the current body positivity movement — namely, it tends excludes fat women who don't meet a certain weight or appearance standard — but one of the most harmful narratives it pushes is the idea that fat people can be beautiful in spite of their size. What Nimoy's Full Body Project seeks to show viewers, and what West's memoir tries to convince readers of, is the fact that fat people are beautiful because of their size. The problem is, we don't live in a culture that appreciates, or even tolerates, bigness. It's seen as a health problem, a gross injustice, an affront to humanity to live outside the predetermined margins of acceptable size. Ask West, though, or Nimoy, or any of the models of the Full Body Project and you'll surely learn that there is power and beauty in all bodies. More importantly, there is, as West says, value in big bodies, in all bodies, and coming to that realization is truly revolutionary.

For me, Shrill turned out to be so much more than notes from a loud woman, as the book's original subtitle implied. It was new way to live in, and love, my body, and for that I'd like to say: thank you, Lindy West.

More like this
10 Must-Read New Books Out This Week
By K.W. Colyard
Jennette McCurdy’s First Kiss On 'iCarly' Didn’t Go As Planned
By Bustle Editors
The Biggest Differences Between 'Bullet Train' & The Book It’s Based On
By Arya Roshanian
'The Sandman’s Ending Is A Departure From Neil Gaiman’s Comic Book Series
By Kadin Burnett
Get Even More From Bustle — Sign Up For The Newsletter