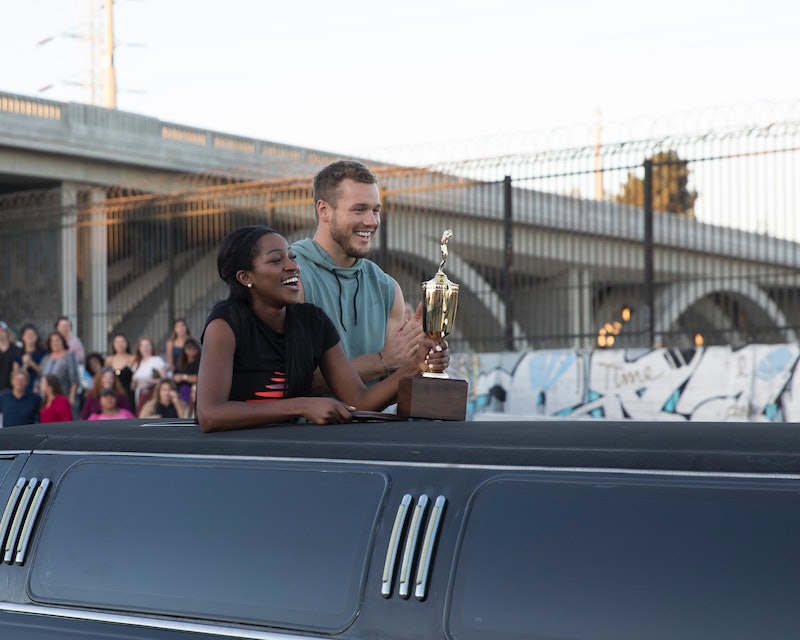 Another week, another fight between two members of the Bachelor cast. If you've watched the show your whole life like I have, you just know what to expect. Oneyka and Nicole's fight on The Bachelor started like many others — with loose lips and sinking ships — but it was another contestant that made the whole thing worth it, mostly because she stepped in, defused the whole thing, and then got a drink. Thank you, Tayshia, for being a voice of reason. Ultimately, though it wouldn't be enough to save the cocktail party.

Elyse's departure earlier in the episode meant that we needed just that much more drama, so Oneyka took it upon herself to tell Colton that Elyse told her that Nicole said (still with me?) that being on The Bachelor was only a way for her to get out of Miami and make something else of her life. It could be true, it could not be true, but everyone knows the first rule of being on The Bachelor — don't snitch on the other women. It never ends well.

In any case, Nicole and Oneyka had it out on the group date because Nicole was mad. Wouldn't you be? This is hearsay to the nth degree. Luckily, Tayshia, who was present for the original conversation, was happy to remind Onyeka and the group that that wasn't what Nicole actually said, and then carefully removed herself from the situation. Tayshia had her buddy Nicole's back, but she also wasn't going to let some insignificant drama take Colton's time away from all of them, and for that, Tayshia is the MVP of this episode of The Bachelor. Let's give the woman a round of applause.

But it wouldn't be reality television if two people in a fight decided later that they still needed to be in a fight! What were we thinking, that this thing could all be over? Nope.

Nicole and Oneyka fought again later at the rose ceremony. They fought so hard that Colton came into the scene and they didn't even stop! They were talking about Colton and only stopped when he sat down. He couldn't get a word in edgewise, and he eventually stormed away, leaving us with the first "to be continued" cliffhanger of the season. He stormed off to the beach while the other women watched, and everyone was really shook. Next week is going to be a doozy.

On shows like The Bachelor, you have the Nicoles and you have the Oneykas. The Oneykas start drama to stay in the game without realizing they'll look bad. The Nicoles either cry or laugh it off, and they sometimes come out unscathed. Sometimes, really, having a fight like this in front of Colton or any Bachelor just makes everyone look petty and weak, which is not how you want to appear to the man you could pretend to want to marry in a few weeks. It never, ever benefits a Bachelor contestant to snitch on another contestant.

Remember that — if you're ever on The Bachelor, keep all the drama between the contestants and don't have it around the Bachelor. Because making a guy storm off is never a good look.