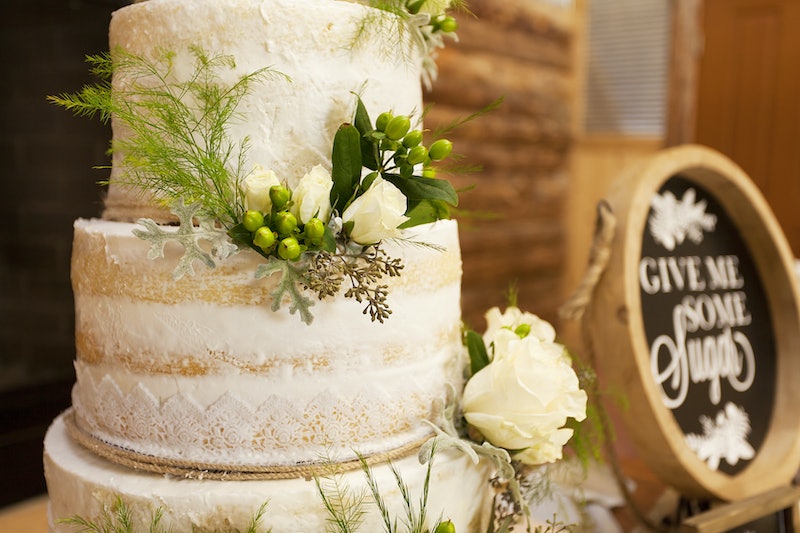 On Feb. 3, private schoolteacher Jocelyn Morffi married Natasha Hass in a ceremony in Key Largo. Per their wedding website, the festivities went on for three days, including a pre-wedding bash, a ceremony at the Key Largo Lighthouse, and a barbecue the following day. After the celebration, Morffi returned to teach the following Wednesday; on Feb. 9, the openly gay teacher shared on Instagram that she was fired from her position. (Bustle has reached out to Sts. Peter and Paul Catholic School in Miami and Jocelyn Morffi for comment, and will update this post upon response.)

While the school has not issued an official statement on Morffi's dismissal, the Washington Post received a statement from Mary Ross Agosta, serving as a spokeswoman for the archdiocese, over email: "Any Catholic teacher who signs a contract with the Archdiocese of Miami is acknowledging that policies and procedures will be followed and will abide by the teachings and traditions of the Catholic Church."

According to Miami area's NBC6, Carlota E. Morales, the principal of Sts. Peter and Paul Catholic School in Miami wrote an email to parents on Feb. 8 discussing the dismissal of Morffi, the full text of which is below:

Today a difficult and necessary decision has been made regarding Ms. Jocelyn Morffi, our first grade teacher. She is no longer teaching at our school.

Please know that your child(children)'s education is of the utmost concern for us and through the next days and weeks your child's routine will not be disrupted as Ms. Morffi's replacement will be selected very soon.

I ask for your continued prayers for Sts. Peter and Paul's students and faculty as we enter the season of Lent on Ash Wednesday, February 14, and look forward to the celebration of the resurrection of Jesus Christ.

The letter notably does not mention the cause of Morffi's dismissal from the school.

The day after the letter to parents was sent, Morffi wrote on Instagram, "This weekend I married the love of my life and unfortunately I was terminated from my job as a result. In their eyes I’m not the right kind of Catholic for my choice in partner. However, I will CONTINUE with #teachHope and will inform you of the new location for the February 25th outing very soon. Also THANK YOU for the outpour of Love and Support."

Morffi's #teachHope refers to the theme of her first grade classroom this year; in her profile, she writes, "Help me teach my first graders that there is still hope for a better tomorrow." Her Instagram documents the excursions her students have taken, most of which involve making lunches for people in need. According to the Miami Herald, Morffi has worked at the school for seven years, and in addition to her #teachHope campaign, also coaches the basketball team.

The Miami Herald spoke to parents about Morffi's dismissal, and some are upset with the decision.

“We were completely outraged, all of the parents,” said Samantha Mills, the mother of a child in Morffi's last class, to the Miami Herald. “This teacher in particular has made such a contribution to the school. She never imposes her personal beliefs on others. She just does everything in love. She has a way of teaching that is so amazing.”

Another unnamed parent said to the Miami Herald, "It’s the Catholic church and they don’t allow lesbians nevermind gay marriage. When you’re working for a business, as in this case, a Catholic owned school, you have to play by their rules.”

As the Washington Post notes, in terms of the firing, there are very few protections for Morffi's situation; a bill that would protect people from being fired in the state of Florida based on their sexual orientation stalled in the Senate.

Furthermore, according to Religion News Service, following the 2014's lift of the state ban on gay marriage, Miami Archbishop Thomas Wenski sent a message to church employees in January 2015 discouraging them from supporting gay marriage openly: "Whatever the role in which you serve within the Archdiocese, you publicly represent the Catholic Church and the Archdiocese in everything you do and say," read the memo. "Employees should exercise discretion when posting on social media sites, and note that online activity indicative of prohibitive behaviors may subject an employee to disciplinary action or termination."

At this time, Morffi has not shared whether she intends to seek legal recourse for her dismissal from the school; but her absence has not gone unnoticed from parents and students alike.

"I had to sit my son down and tell him that she wouldn’t be the teacher anymore and he cried," said parent Cintia Cini to NBC6. "We feel cheated. She was the best kind of teacher that you can ask for and our kids, everybody, every parent here — our kids loved her."