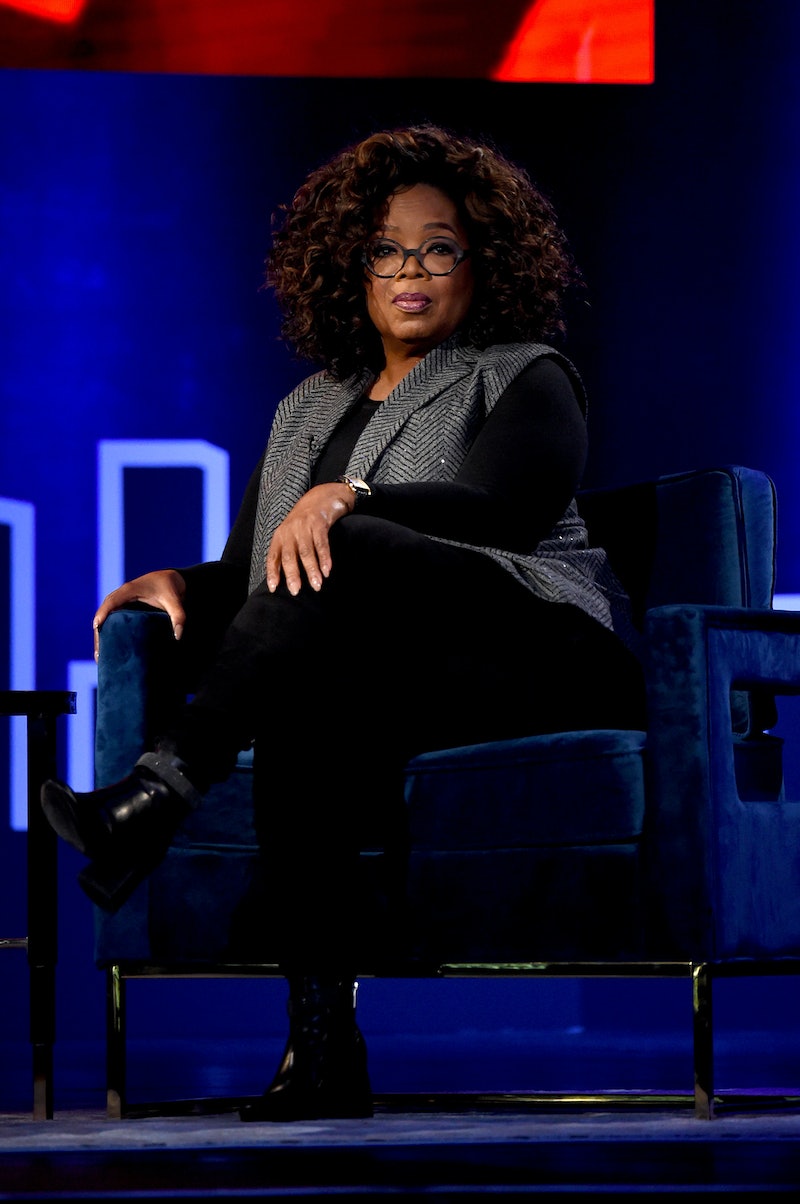 In a full circle moment of sorts, Oprah Winfrey will interview Michael Jackson accusers Wade Robson and James Safechuck in a special which will air on both HBO and OWN on Monday, March 4 at 10 p.m. ET. Titled Oprah Winfrey Presents: After Neverland, the newly announced program will immediately follow the final installment of the Leaving Neverland documentary and will feature interviews with the two men who alleged that Michael Jackson abused them as young boys. The special will be filmed before "an audience of survivors of sexual abuse and others whose lives have been impacted by it," according to HBO. Oprah is not only a fitting choice for her undeniable interviewing talent as a journalist, but also because the media mogul conducted one of her most famous interviews with Jackson at his Neverland Ranch almost 26 years ago.

Jackson was never charged of any crimes in relation to Safechuck or Robson, and the musician died in 2009. Yet Leaving Neverland, which highlights their allegations against Jackson, had drummed up significant controversy even before it debuted at the Sundance Film Festival in January. Following the premiere, Jackson's family slammed the documentary in a statement to Variety, calling the film "a tabloid assassination" and "public lynching." The statement read, in part:

"Michael Jackson is our brother and son. We are furious that the media, who without a shred of proof or single piece of physical evidence, chose to believe the word of two admitted liars over the word of hundreds of families and friends around the world who spent time with Michael, many at Neverland, and experienced his legendary kindness and global generosity."

In response, director Dan Reed said to CBS This Morning host Gayle King that he saw no reason to reach out to the Jackson family for the documentary, as they weren't present at the time of the alleged abuse. "This is not a film about Michael Jackson, it’s a film about Wade Robson and James Safechuck, the two little boys to whom this dreadful thing happened long ago,” he told King, who coincidentally is a longtime friend and collaborator of Oprah's.

Twenty-six years ago, Oprah's Feb. 10, 1993 live interview with Jackson was watched by 90 million other worldwide viewers, according to Oprah.com. During the live sit-down, the pair discussed everything from Michael's relationship with his father, the late Joe Jackson, to controversy over his skin color, which he attributed to a genetic disorder called vitiligo, to plastic surgery rumors. (Jackson admitted to having a nose job, but said most other reports were false.) According to Oprah's website, she also asked him if he was a virgin, a question she later called "embarrassing."

The famous interview took place six months before Jackson was first investigated for sexual abuse in Aug. 1993. In one telling memorable segment, however, he spoke about his difficult childhood, remembering how he would cry watching children playing in a park across the street while he was trapped in a recording studio.

"It would make me sad that I would have to go to work instead," Jackson told Oprah in 1993. "People wonder why I always have children around. It's because I find the thing that I never had through them. Disneyland, amusement parks, arcade games — I adore all that stuff because when I was little, it was always work, work, work."

Reflecting on the conversation years later in September 2009 — shortly following Jackson's death — Oprah remembered the pop star and the 1993 interview fondly. "He's very likable there, and I can tell you I really, really liked him," the host, who also got a moonwalk lesson during the interview, said in a story posted on her website. "After this interview, I thought I could be his friend, because I felt that he was really honest."

Oprah was also enthralled by the King of Pop's famous home, where the interview took place. Said Oprah, "We are coming in the gates of Neverland, and it's like a moment in The Wizard of Oz. It was literally like going to see the wizard. We couldn't believe it. I felt like a kid."

Decades later, Oprah will be chatting on-air with two childhood victims of alleged crimes that took place within those exact walls. Viewers will have to tune in to see what her new interviewees have to say.

More like this
Taylor Swift Calls Dwayne Johnson "The Man" After Revealing New "Taylor's Version" Song
By Jake Viswanath
Everything You Need To Know About ‘Black Panther: Wakanda Forever’
By Bustle Editors and Radhika Menon
Jamie Foxx Revealed The Question That Got Cameron Diaz To “Un-Retire”
By Grace Wehniainen
Before 'Bullet Train,' Revisit These Brad Pitt 'Fight Club' Premiere Photos From 1999
By Grace Wehniainen
Get Even More From Bustle — Sign Up For The Newsletter