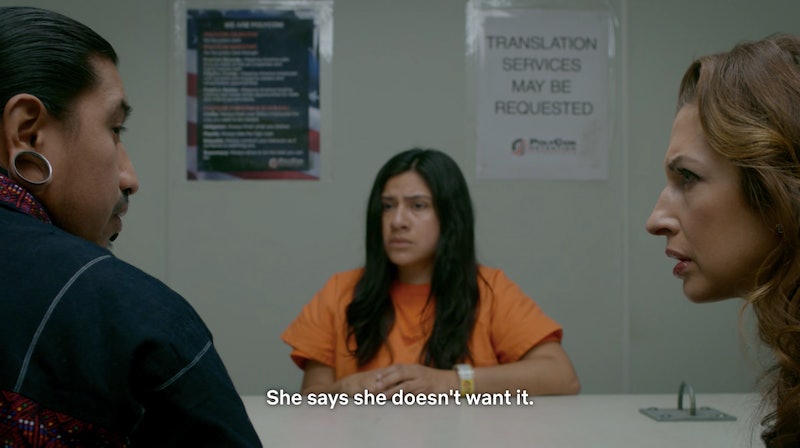 From LGBTQ rights to the systemic racism in the criminal justice system, Orange Is The New Black has never been a show that shies away from addressing impactful, realistic topics. The final season is no different — especially as it wraps up the storylines of the Netflix drama’s complex characters. Santos Chaj (aka, Chaj, played by Melinna Bobadilla), a Guatemalan migrant who viewers are introduced to in season seven, has an especially complicated and heart-wrenching journey as she struggles to seek out an abortion while incarcerated. According to experts, OITNB’s abortion scene in the final season doesn’t get everything right, but it’s a pretty accurate representation of the barriers many incarcerated people face when trying to seek an abortion. (If you haven’t finished the new season of OITNB, there are spoilers ahead.)

In this season, Chaj is detained at the PolyCon detention center after attempting to cross the border, and it’s later revealed over the span of two episodes that she was sexually assaulted during this migration attempt, which results in an unwanted pregnancy. Though Chaj tries to tell the guards that she wants an abortion, she only appears to speak fluent K'iche' — a Mayan language spoken in Guatemala — and she has no access to a translator. Following failed attempts at communicating, Chaj tries to terminate her unwanted pregnancy with an herbal tea remedy made from parsley, which is unsuccessful. Shortly thereafter, Chaj is able to get her message across to Natalie Figueroa (aka, Fig) with the help of a translator, but the ICE refuses to grant her request for an abortion. A compassionate Fig, with the help of her OB/GYN, obtains an abortion pill to sneak in to Chaj to terminate her pregnancy illegally.

Santos’ story as a Guatemalan woman is not so uncommon: Steph Herold, MPH, a data analyst at Advancing New Standards in Reproductive Health (ANSIRH), tells Bustle that though Latinx people seeking abortions are “vastly underrepresented on TV,” they account for 25% of abortion patients in the U.S. “This OITNB depiction is one of the first that I know of to depict an undocumented Latina seeking an abortion, and the barriers she faces as a result of her immigration status, language barriers, and because she's incarcerated,” she says.

Due to the restrictive abortion laws, Herold says that research has suggested that people are increasingly opting to use self-managed abortion methods in the U.S. like Chaj. In particular, more people are mail-ordering the pills similar to the one Fig smuggles in. (Though, states have enacted restrictions and outright bans on abortion pills in recent months that has made this more difficult.) As for the parsley tea, Herold explains that, “We have less data about the safety and prevalence of herbal abortion methods. A few articles suggest that a very small percentage of U.S. women do turn to herbs and other non-medical methods to terminate their pregnancies, and like the character in OITNB, these methods often fail and women then need to pursue other methods of abortion.” Chaj goes to medical after drinking the remedy with abdominal pain and some bleeding, which is pretty standard based on the little research that does exist on the side effects of parsley tea.

Not to mention, Chaj’s storyline brought to light the discrimination that many incarcerated people face when seeking reproductive healthcare in the most visceral way. Dr. Carolyn Sufrin, a OB/GYN and researcher at Johns Hopkins School of Medicine, and the author of Jailcare: Finding the Safety Net for Women Behind Bars, tells Bustle that while both people in prisons and ICE detention centers have the constitutional right to receive an abortion, many are denied their right to receive this medical procedure, like Chaj. “Prisons and jails have incredible discretionary power in terms of what health care they provide,” Dr. Sufrin explains, adding that many prisons and detention centers consider abortion an “elective procedure,” rather that necessary medical care. A 2019 study conducted by Dr. Sufrin discovered that only 1% of women in prisons terminated pregnancies from 2016 to 2017. Comparatively, the Guttmacher Institute estimates around one in four women in the U.S. will have abortions by the age of 45.

When a single ICE guard has the power to deny Chaj her abortion, this is extremely similar to real life situations that many undocumented folks and people in prison face. “The custody officers are your gatekeepers to accessing medical care,” Dr. Sufrin says. “There's really no accountability, so that's why there's this disconnect between what's required, and what actually happens on the ground.”

However, Dr. Sufrin says the one aspect of Chaj’s abortion that OITNB failed to capture was the possible aftermath of her decision to take the pill that Fig snuck in. Though both Herold and Dr. Sufrin say abortion pills are generally safe, Dr. Sufrin explains people in prisons or detention centers may not have the ability to receive pain medication, or timely emergency medical care if there are any complications. “I imagine it would be a hard experience to have in a carceral setting, because the bleeding that someone can have when they're going through a medication abortion can be heavy for a couple of hours, and incarcerated [people] do not necessarily have access to menstrual hygiene products,” she explains.

Still, it’s important to note that a 2019 study that Herold co-published with her colleague Dr. Gretchen Sisson, a qualitative sociologist who leads the Abortion Onscreen project at ANSIRH, revealed U.S. television tends to overexaggerate the potential medical risks associated with abortion procedures. In reality, abortions are a safe procedure (especially when performed by, or under the guidance of a medical professional). So, while OITNB missed the opportunity to expand on Chaj's story, there's a good chance she would have made it through the medication abortion just fine.

Reproductive rights also must combat the often overlooked injustices that incarcerated people often experience when it comes to seeking safe and legal abortions. Though Chaj’s journey to terminate her unwanted pregnancy after being sexually assaulted is fiction, it highlights the need for more accessible and non-discriminatory healthcare in real life. OITNB didn’t accurately portray everything about abortion in its final season, but Chaj’s storyline brought visibility to the barriers many people in prisons and detention centers must overcome to receive an abortion — and that’s invaluable.