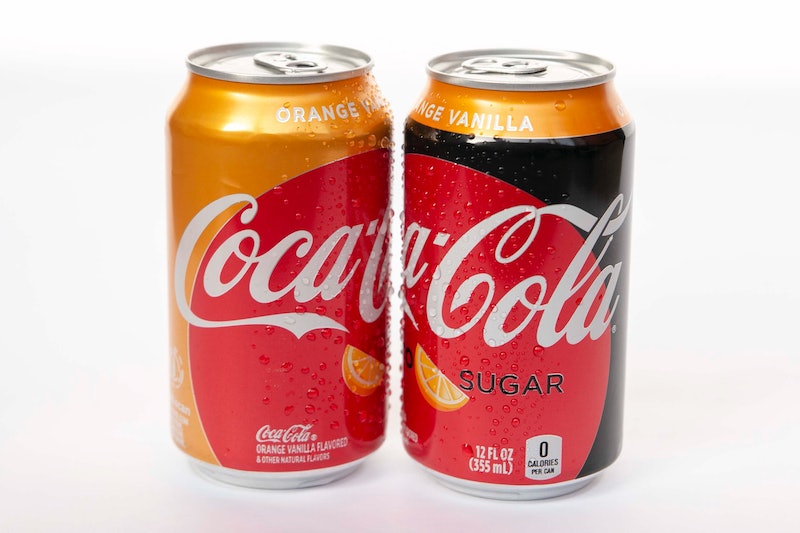 People can be pretty obsessive about their choice of caffeinated beverage, but for those who are willing to try something new, Coca-Cola is introducing its first new flavor in over 10 years. On Friday, February 8, Coca-Cola announced Orange Vanilla Coke and Orange Vanilla Coke Zero Sugar. And while the announcement was just made, the new drinks will be everywhere before you know it.

If "Vanilla Orange" brought to mind a Creamsicle, you're exactly right when it comes to what the brand is going for. They want you to be unable to resist the nostalgia of it all. "We wanted to bring back positive memories of carefree summer days," said Coca-Cola brand director Kate Carpenter. "That’s why we leaned into the orange-vanilla flavor combination — which is reminiscent of the creamy orange popsicles we grew up loving, but in a classically Coke way."

Now, while this is the first new Coca-Cola flavor in over a decade, that's not including Diet Coke, which has had many new flavors as of late. In January 2018, Diet Coke revealed a new look and four new varieties. The new Diet Cokes come in sleek cans and in the flavors Ginger Lime, Zesty Blood Orange, Feisty Cherry, and Twisted Mango. At that time, Coca-Cola made very clear that the regular Diet Coke recipe was not changing and that it would still be available in standard cans and all the usual other options in addition to the new slim can. People are incredibly passionate about their Diet Coke and Coca-Cola is well aware of that.

More recently, in January of this year, the brand announced the release of two more Diet Coke flavors: Blueberry Acai and Strawberry Guava, which are in stores now. These new flavors are meant to appeal to younger customers, who are into more... seltzer-like flavors, shall we say. "Many of our newer fans were not even born when Diet Coke first launched in 1982, so they may see the brand as a choice of generations before them," said integrated marketing communications director Tara Mathew Sahu. "We’re reframing the brand in a youthful, energetic and aspirational tone and showing how Diet Coke can fit into their lives."

It's only about two weeks until Orange Vanilla Coke and Coke Zero Sugar launch, so if you want to check them out... well, it's Coke, it'll be everywhere.