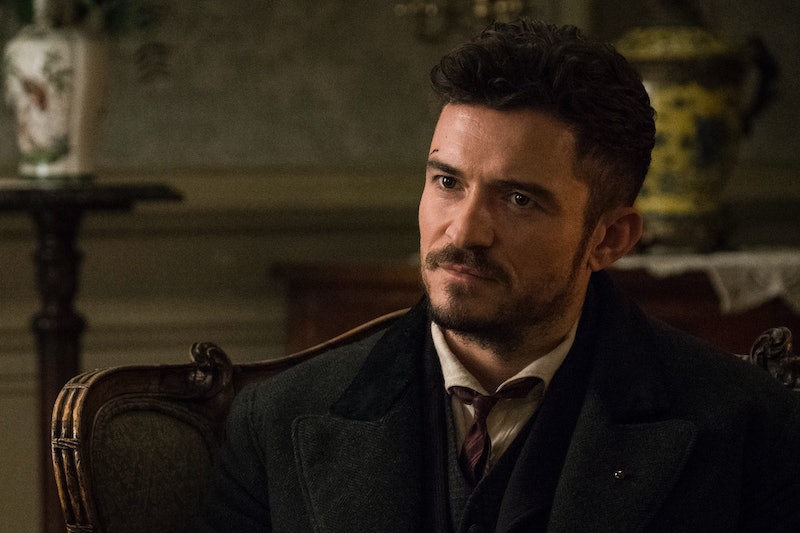 Following his turns as Legolas in The Lord of the Rings franchise and Will Turner in The Pirates of the Caribbean movies, Orlando Bloom is dipping back into the fantasy genre with his Carnival Row character Rycroft Philostrate. The show explores a Victorian-era world in which mythological creatures are forced to flee from their war-torn homeland and seek refuge in the Burgue, a human-dominated city where they're largely unwanted. Bloom's character, nicknamed "Philo," is a human detective investigating a series of murders. He's unusually kind to the fae people — in part because he's in love with faerie Vignette Stonemoss (Cara Delevignge) — but that doesn't necessarily mean he's all good, as viewers will see when Carnival Row premieres on Aug. 30.

As revealed in a preview video for "Philo's Story," Bloom's character grew up as an orphan during a time in which mystical creatures like fauns, faeries, trows, and centaurs all lived peacefully with humans in the Burgue. But after a war broke out, the humans exiled all of the faefolk to a section of town called Carnival Row. Now, Philo defends the faefolks' rights as an inspector for the police. And while he sounds like a hero — as Bloom is accustomed to playing — there is another side to Philo. According to The Hollywood Reporter, Bloom said during San Diego Comic-Con that Philo "was a fun way for me to explore my shadow self a little bit, because he's a man of secrets."

Showrunner Marc Guggenheim echoed this sentiment on THR's Series Regular podcast, saying "Philo is basically 180 degrees away from Will Turner and Legolas." Bloom is "playing a character that is much more internal, much darker, much more brooding ... He's not being a swashbuckler by any stretch," Guggenheim continued.

Part of that darkness stems from Philo's "rather complex romantic history" with Delevingne's Vignette. "Vignette comes to The Burgue having thought that Philo was killed [in the war] seven years earlier," Guggenheim explained. "Suffice it to say, Philo is very much alive and Vignette will have something to say about being deceived in that way."

As for the character's unique name, creator Travis Beacham said on the podcast The Spool that he was inspired by a production of A Midsummer's Night Dream. In Shakespeare's play, Philostrate is the Master of Revels, who oversees the duke's entertainment. But don't expect Carnival Row's Philo to be the source of any lighthearted entertainment. As Bloom said in a preview video, "Philo is a lone man. He's a man of secrets and few friends." But whatever secrets he's holding onto should be exposed in Season 1. "The layers of Philo's life ... it's all revealed through the murders that take place," Bloom assured.

Since Carnival Row was already renewed for a Season 2, Philo's story will expand beyond whatever he has been hiding from Vignette. But considering he's living in a world that rejects his kind and loving feelings toward the fae, you can probably expect Bloom's character to maintain his dark (albeit somewhat heroic) persona on Carnival Row as the series continues.

More like this
'Grey’s Anatomy' Star Kevin McKidd Hinted How Ellen Pompeo’s Step Back Will Change Season 19
By Grace Wehniainen
Megan Thee Stallion Actually Auditioned To Be This 'P-Valley' Main Character
By Radhika Menon
Here’s How 'House Of The Dragon' Diverges From The Book’s Timeline
By Allyson Johnson
Everything To Know About 'And Just Like That...' Season 2
By Jack Irvin
Get Even More From Bustle — Sign Up For The Newsletter