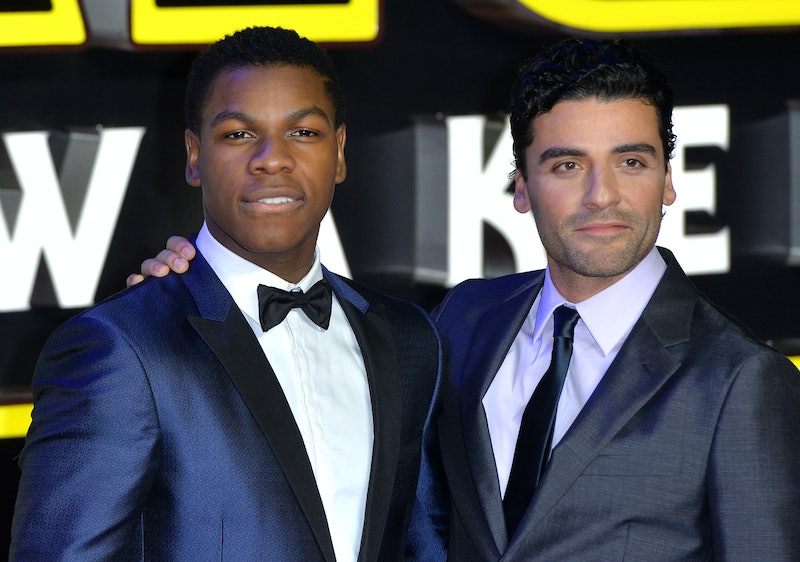 As the release date of Star Wars: Rise of the Skywalker edges closer and closer, one question looms large for fans everywhere: Will this be the installment in which Finn and Poe finally confirm their love? While the cast obviously can't share much about the upcoming Episode 9, in a recent interview for Entertainment Weekly, Oscar Isaac said Rise of the Skywalker "holds potential" for FinnPoe to finally become a reality onscreen.

The actor was chatting with the outlet about what fans can expect from the main trio — played by Isaac, John Boyega and Daisy Ridley — in the final installment of the "Skywalker Saga" when he revealed that there is still a strong bond between the characters of Poe and Finn. "I think that there is a deep, deep connection between the two of them," Isaac said. "There's a deep, deep connection between me and John, and I think that ended up working out really well because, particularly in the new film, we get to work together a lot."

He continued, teasing what fans can expect in the upcoming movie. "You get to see Finn and Poe figuring stuff out together. They're on missions together, there's a lot of camaraderie, there's tension ... as people that are very close have. Ultimately, they believe in each other and they're a team." Later, Isaac noted that "these guys love each other," and that Rise of the Skywalker will finally put the two of them together again to show that love onscreen.

However, just because the former Stormtrooper and Resistance Pilot's connection will be front an center in Episode 9, that doesn't mean that Isaac is confirming that FinnPoe will actually happen. "The truth is, as a performer, I can only do so much because I don't get to write the scripts," Isaac told EW. Still, he said, "I would think that would be a great way for the story to go, and a much more original one, but at least we can say that it holds that potential."

Neither Isaac nor Boyega have been shy about sharing their support for the FinnPoe ship, also known as StormPilot, even joking onstage at the Episode IX panel at the 2019 Star Wars Celebration in April that Poe was joining Finn's "love pentagon" in the upcoming installment. "[Poe] takes his love for Finn very seriously," Isaac said during the panel, adding that after the war ends his character will "have to find [some adrenaline] somewhere," and throwing a meaningful look at Boyega.

In 2018, Isaac told the Huffington Post that he wanted to keep Poe's sexuality "as fluid as possible," saying, "There are a lot of interesting people in the galaxy, it’d be a shame to cut off 50 percent. I think Poe’s open to any kind of adventure." A year later, he told Metro that filming Episode IX has been the "most fun" for him, thanks to getting to spend more time on set with Boyega. Teasing the pair's increased number of scenes together, Isaac said, "We have just had so much more to do together [this time] and we just really connected in a great way."

StormPilot fans have been hoping to see the ship confirmed onscreen since the pair's first interaction in 2015's The Force Awakens. And while it sometimes seems unlikely that their romance will become canon in Rise of the Skywalker, Lucasfilm president Kathleen Kennedy stated in a 2013 interview with USAToday that she was hoping to see "many, many more gay people," in the Star Wars universe. Thus far, there has only been one openly LGBTQ+ character in the Star Wars films, but based on Isaac's comments, Episode IX could still hopefully, finally, fulfill that "potential" for more representation.

More like this
You Definitely Know The Voice Of Shuri's AI In 'Black Panther: Wakanda Forever'
By Brad Witter
'Avatar 2' Now Has A Teaser Trailer & Release Date
By Jack Irvin and Alyssa Lapid
Taylor Swift Fans Sue Ticketmaster For The Eras Tour “Ticket Sale Disaster”
By Jake Viswanath
This James Bond Event At Abbey Road Studios Was A 007 Fan's Dream
By Samantha Rollins
Get Even More From Bustle — Sign Up For The Newsletter