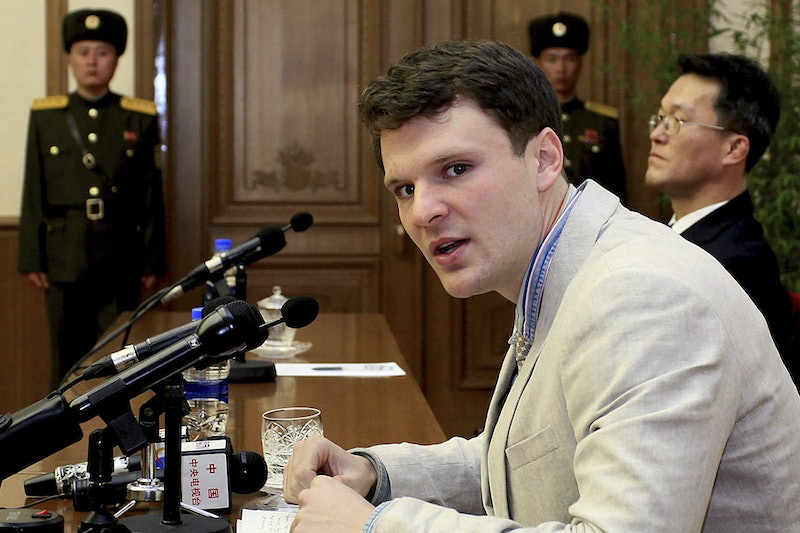 According to a statement released by his family Monday, American student Otto Warmbier has died after being detained by North Korea for 17 months. Warmbier was released by the North Korean government the previous week, but he'd fallen into a coma during his detention, and doctors who examined him said that he'd suffered extensive loss of brain tissue. His state was described as "unresponsive wakefulness," but according to his family, he passed away Monday.

"It is our sad duty to report that our son, Otto Warmbier, has completed his journey home," his parents Fred and Cindy wrote in a statement. "Surrounded by his loving family, Otto died today at 2:20pm."

The North Korean government detained Warmbier, who was taking a state-sanctioned tour of the country, in January 2016. The government claimed that he committed "a hostile act" by attempting to steal a banner from the hotel in Pyongyang where he and the other tourists were staying. This month, North Korea told Warmbier's family that he had become comatose after contracting botulism, and had been in a coma for over a year. Doctors who later examined him at the University of Cincinnati said that he showed no signs of botulism.

"It would be easy at a moment like this to focus on all that we lost — future time that won't be spent with a warm, engaging, brilliant young man whose curiosity and enthusiasm for life knew no bounds," Warmbier's family said. "But we choose to focus on the time we were given to be with this remarkable person. You can tell from the outpouring of emotion from the communities that he touched — Wyoming, Ohio and the University of Virginia [where he was enrolled] to name just a few — that the love for Otto went well beyond his immediate family."

According to Time, nobody in Warmbier's tour group could confirm the claims of North Korean officials that he snuck off to a staff-only section of the hotel during their stay. One member of the group said that "if I had to pick a tourist in that group to be involved in an incident, [Warmbier] would have been at the bottom of the list," and the man who was his roommate during the trip said that there's "nothing from my experiences with him that would suggest he would do something like that."

"When Otto returned to Cincinnati late on June 13th he was unable to speak, unable to see and unable to react to verbal commands," his family said Monday. "He looked very uncomfortable — almost anguished. Although we would never hear his voice again, within a day the countenance of his face changed — he was at peace. He was home and we believe he could sense that."

North Korea is widely considered one of the most repressive regimes in the world. In 2014, the United Nations released a report accusing the country of "crimes against humanity [including] extermination, murder, enslavement, torture, imprisonment, rape, forced abortions and other sexual violence, persecution on political, religious, racial and gender grounds, the forcible transfer of populations, the enforced disappearance of persons and the inhumane act of knowingly causing prolonged starvation." The UN concluded that "the gravity, scale and nature of these violations reveal a State that does not have any parallel in the contemporary world."

Can Botulism Cause A Coma?

Otto Warmbier's Roommate Breaks His Silence On The "Horrendous Situation"

This Otter Warmbier Update Indicates There's No Sign Of Botulism