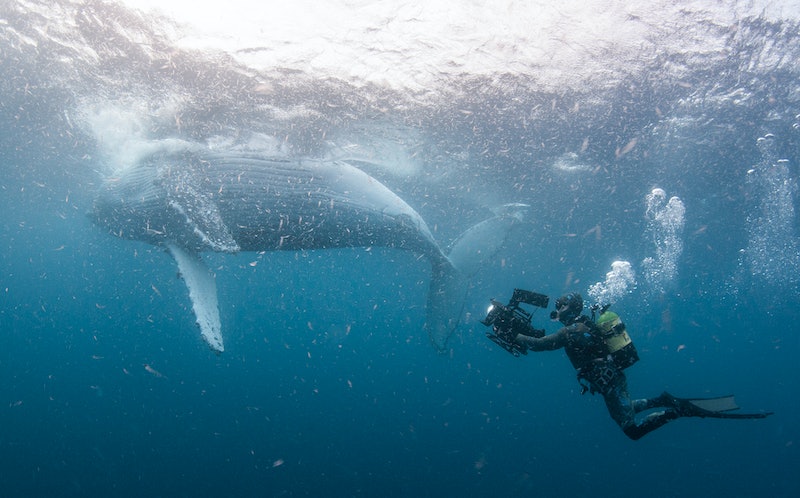 Few people get the opportunity to fly thousands of miles to experience some of the most desolate, unpredictable, and awe-inspiring locations around the globe. For many people it would be a dream to go and film animals in their natural habitat but it isn't an easy job. One of the reasons David Attenborough documentaries are so popular is because they give you a glimpse at some of the most beautiful but challenging places to work in the world. Our Planet director and producer, Sophie Lanfear took her wildlife film-making expertise and passion for the Polar Regions to produce and direct the "Frozen World" episode in Attenborough's new Netflix series Our Planet. She spoke to Bustle about landing a job in your dream destination, the work that goes into producing these documentaries, and how to get into wildlife film making.

It came as little surprise to fans that Our Planet is nothing short of a work of art. Focusing on the remarkable diversity of habitats around the globe, film crews take the viewer from the frozen world to the rain forest to show how each habitat is interlinked.

Lanfear worked on episode two of Our Planet travelling to the Arctic and Antarctic to highlight how absolutely important the sea ice is and the effect climate change is having. The team caught images of narwhals in Canada’s Arctic Bay and humpback whales, orcas, leopard seals and gentoo penguins in the Antarctic Peninsula. Also for the first time, cameras capture the largest gathering of walruses on the planet, in Northern Russia. It is breath-taking to watch.

Far from her first foray into the world of wildlife film-making Lanfear developed a passion for the Polar Regions while growing up in the Norwegian Arctic, and her knowledge of Arctic wildlife led to her taking on polar shoots when she began working in wildlife television.

Bustle: What was your role for Our Planet?

Sophie Lanfear: I was the producer/director of the Frozen World episode.

Bustle: Amazing. It’s a very challenging environment. What was that like?

SL: I love the poles. It is a challenging place to work and you lose a lot of day to filming because of weather, it's a major problem but no, amazing place to make a film about. It was a passion film for me because I grew up in Northern Norway and just fell in love with the Polar Regions. Getting to make the frozen episode was a dream come true.

Bustle: That's what I was going to ask you. When did your interest for the region first develop? How did you develop that into a career?

SL: I studied Zoology at university. I self-taught myself photography. I had an interest in science and I’ve always loved nature, being outdoors, and animals. Then I realised that there was a career that could combine wildlife, science, and photography. It was a natural fit. I went to university studying Zoology in South Africa.

I worked on Cambridge University's Meerkat project. I had a film crew out there that were filming the Meerkat Manor in the animal planet. I was talking to them, they said, "Don’t worry about getting a Ph.D. or anything just get straight into it." I came back and worked my way up the ladder from making cups of tea to the big landmark casting the series.

Bustle: During the project for "Our World", was there any particular highlights for you?

SL: Gosh, so many highlights. It feels like my biggest achievement that it is my first film that I produced. I feel quite proud of that. We saw some incredible things that people have never seen before. The walrus obviously is one of them. There were also leopard seals in South Georgia. There’s a sequence in the film about leopard seals hunting.

I’ve seen penguins returning to feed their chicks and leopard seals are normally solitary creatures. It’s very rare to see more than one in an area. We counted 36 in the bay. The team did a fantastic job. In three days they captured an incredible action sequence of this hunt that was going on. Trying to capture the Leopard Seals chasing the king penguins as they go up the beach and try and grab them in the surf. That was a pretty amazing thing to witness when no one else has.

Bustle: You've already mentioned the daylight being a particular challenge, but were there any other challenges that you faced whilst you're out there?

SL: Going to the loo. When it's really cold, it's like -20 degrees outside and being female you have to bare all, so that's always pretty uncomfortable. You just try not to drink too much water. Probably the biggest challenge would be I'm responsible for the safety of the whole crew. I have to write all the risk assessments and the sea ice is a very dangerous place to work because it could break off at any time.

We had to move our camp. There are two known break points and so one day we were in camp and suddenly the local Inuit people were really worried. I think there's a video actually online that shows it, but they were like, "Right, we have to move now. There's cracks appearing and we better go." We just dropped everything, put the tents down and then moved the camp several kilometres to the south. The day we packed up for filming, that piece of ice basically broke away. Luckily, we were obviously on the right side of the crack, but a 16 kilometre by 30 kilometre wide piece of ice started drifting out to sea. The thing is, you wouldn't know if you were on that piece of ice, you would just drift out to sea.

Bustle: It’s amazing watching these documentaries. How much work goes in behind the scenes? Do you get particular training before you go out there?

SL: Yes, we do all sorts of training. You learn about sea survival on boats and you practice in swimming pools getting into life rafts. You learn all the boat procedures and evacuation protocols. We have remote hostile locations to learn first aid because often you're not near any hospitals, you're several days away. You learn how to stabilise people as best you can. We have a lot of training within the industry that we all keep up to date with.

Bustle: How big is the team when you are out there? And how much work do you all go through beforehand?

SL: A lot of work goes in beforehand. We filmed over two and a half years, but it's a four-year production process. There's a lot of work that goes on in UK, where we have a production team who are responsible for speaking with scientists, finding out much information about locations as possible beforehand and obviously details of health, and safety protocols. Then we've got logistical coordinators who are incredible and they think about everything, what we might need. There's a really thorough research process, really thorough logistical process and then you go through the kit. Especially in the frozen world, you can't forget anything.

If you forget one major cable, then the whole shoot could fail because you haven't got the download cable or something, so you are so thorough with checklists. I personally check everything that goes on the shoot. I want to know everything that's been packed, so I have peace of mind that nothing has been forgotten and that we've got spare cables.

You need to make sure that you’re prepared for not just filming but all the things that can go wrong. In terms of numbers, the smallest teams we have are probably two, more likely three because we'll have an expert. We also usually have a scientist as an expert or a local guide with us. My biggest crew was about eight to ten people I think.

SL: Yes, they are. Well, the thing is you don't want to disturb the wildlife. You keep crew numbers to a minimum so that when you're out filming it's easy, just you and the camera because you want to have a low profile and not interfere with the wildlife at all.

Bustle: What are the top three tips you would give someone?

SL: Gosh. I would say observational skills. Being able to cue into wildlife and animal behaviour and be able to really watch what's going on, so that you can predict what's going on. Feeding that information to the cameraman, describing what he can't see is a key part of the job. When they're looking down the camera, they can only see a very tiny field of view of what they're looking at. You've got to try and help them predict what's going to unfold in front of them so that, they can get a shot.

Storytelling is a key part of what we do. Knowing what's going to make a good story visually on television and being able to translate that into the shot. It's all about storytelling really, that's the fabric of what we do. Then I'd say good knowledge of how to find stories, to being good at finding stories.

Bustle: Absolutely. One thing with these documentaries is they can be harrowing, you really invest in the animals. Is it ever difficult to leave?

SL: I'm always saddened to come home. I love every minute out there with the animals. Every shoot you go on, you bond with the animal that you're filming and you get immersed into their world and you begin to see it through their eyes. When you leave the shoot, you're already sad to not be a part of that individual character and their life anymore. You wonder what will happen to them. It's an amazing thing being with wild animals. Just being able to watch them and understand them.