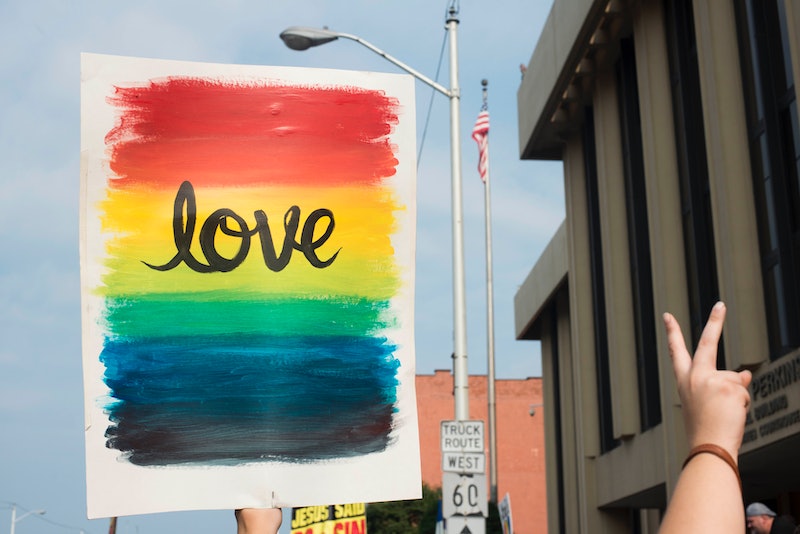 As many people are wont to tell you, this country was founded on the principal of religious freedom. However, in the 300+ years since the United States declared its independence, religious freedom has become a tool to allow discrimination. One Supreme Court case will soon be hearing arguments about whether anti-LGBTQ discrimination is allowable under the guise of religious freedom, and over 1000 faith leaders have come out to show how this argument is incredibly harmful and misguided.

The brief filed on Oct. 30 by the clergy is the latest development in a controversy that began half a decade ago. In 2012, Charlie Craig and David Mullins asked baker Jack Phillips to provide a wedding cake for their wedding reception. Phillips refused, citing his beliefs as a born-again Christian, and offered cookies or brownies instead. Craig and Mullins took Phillips to court, and the case has traveled all the way up to the Supremes, and its final ruling could have significant consequences. Last month, the Trump administration backed Phillips and said he should be exempt from anti-discrimination consequences because of his First Amendment rights.

The 1,300 leaders who wrote the Supreme Court in defense of Craig and Mullins disagree with the Trump administration's argument. The message of the brief is clear: Religious beliefs aren't an excuse to discriminate against anyone. The 129-page brief is signed by leaders of the Christian Church (Disciples of Christ), the Unitarian Universalist Association, the Metropolitan Community Church, the Alliance of Baptists, Muslims for Progressive Values, and Reconstructionist Judaism. According to a press release, the leaders represent 500,000 congregants.

"If he refused to bake a cake for an interracial couple on the ground that his religion taught him that marriages can properly exist only between persons of the same race, we respectfully submit that few would give this objection much credence," the brief says. "The dignitary injury to an interracial couple turned away from his shop would be obvious and palpable — and hardly remedied by the offer to sell them cookies or birthday cakes. So, too, for Respondents Charlie Craig and David Mullins, for whom Phillips refused to bake a wedding cake because of equivalent religious objections based on their status as a same-sex couple."

Unitarian Universalist Reverend Marti Keller, speaking about Trump revoking Obama's birth control mandate, told Bustle earlier this year that one group's right to religious freedom doesn't override that same right of other groups. "It's contrary to the religious freedom of the individual,” she said.

President and CEO of the Religious Institute Rev. Marie Alford-Harkey said in a press release that the case isn't about religious freedom.

"It has been said that this case is about religious freedom or protecting religious beliefs, but as you can see from the broad range of religious leaders on this brief, that is not true," Alford-Harkey said in the release. "Our faiths affirm the inherent worth and dignity of LGBTQ people and our relationships. We believe LGBTQ people should be treated equally under civic law, and we are the growing majority. For us, this case is about seeking justice for LGBTQ people, being present with those on the margins, and loving our neighbors as ourselves, without exception. Our faith traditions require nothing less."

Leaders in the Presbyterian, Methodist, and Lutheran movements have spoken out in favor of gay marriage in recent years. The same goes for Reform Judaism. Still, many of the most prominent religious denominations and organizations in the U.S. still oppose same-sex marriage. According to the clergy who are defending gay couples across the nation, a businessperson's personal beliefs about gay marriage isn't a reason to deny a gay couple service.

"It is both morally wrong and not constitutionally required to permit blanket discrimination in the public marketplace for goods and services based on the personal religious beliefs of merchants with respect to same-sex couples’ rights and relationships," the brief says. "Amici believe that, to the contrary, public accommodation laws should be applied on the basis of religiously neutral principles of equal protection under the law."

Whether the Supreme Court decides in favor of Phillips or the Colorado Civil Rights Commission, the case's outcome will have far-reaching and long-lasting impacts. These religious leaders speaking out against Phillips is an interesting turn, and it underscores just how divided Americans are on where religious freedom ends and discrimination begins.