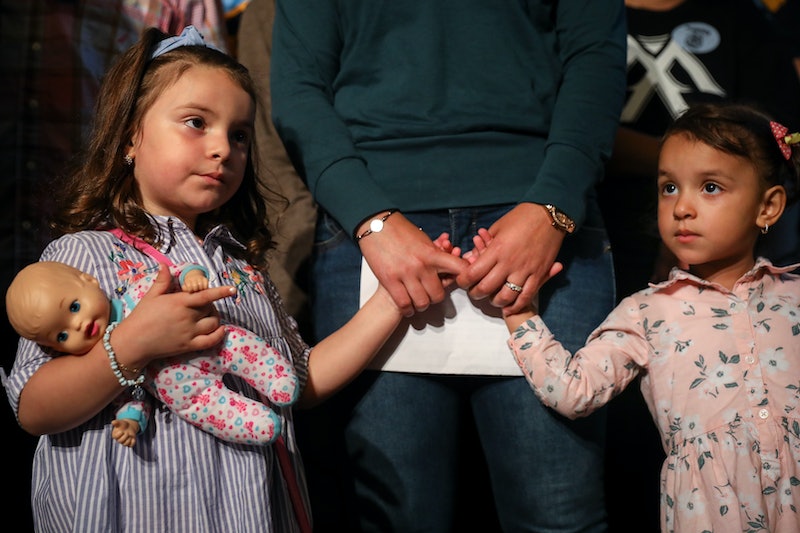 The latest assessment on current efforts to reunite immigrant children with their parents as of July 23 is less than ideal: federal authorities have estimated that over 400 immigrant parents may have been deported without their children over the last few months. These immigrants, of which the federal authorities estimate there are 463, were parents to children over five years old at the southern border, and are currently "not in the U.S." as of Monday. In other words, this will now make it that much more difficult for the Trump administration to reunite them with their detained children.

This is a massive problem for two main reasons: First and foremost, this leaves the future of those children utterly in question if the Trump administration cannot locate their parents. Additionally, on a more logistical level, it causes a huge issue for the Trump administration in meeting the deadlines set by a federal judge to reunite all detained children with their families. The deadline (which was already delayed once) is set at Thursday, July 26, in which the more than 2,500 children currently awaiting reunification are supposed to be returned to their parents.

According to the filing, 879 children of that group have already been reunited with their families, and an additional 538 have already been cleared in their evaluations and are waiting for other reasons. However, there were still reportedly over 600 families that needed to undergo evaluation as of Thursday, before the administration could even determine whether they were "eligible" for a reunion, which will delay the reunification process even further.

What's more, government lawyers are reportedly insisting that 917 of these parents of children between the ages of 5 and 17 are "potentially ineligible for reunification," Mother Jones reports, for a variety of reasons, from the parent having waived their right to reunification to the parent having a criminal record.

The government continues to maintain that all parents had the opportunity to bring their child with them if and when they were, in fact, deported, though it's up for debate whether these parents (many of whom didn't speak English) knew what they were signing away, and what their options were.

This isn't the first time Trump's zero-tolerance policy has caused a problem. When the government was working to reunite children of the most urgent age group (5 years old and under), they estimated 12 parents to already have been deported, and it's unclear currently whether they have actually been able to locate those parents.

The government has made no such statement indicating how it would plan to track down and locate the hundreds of parents who have potentially been deported, as of yet.

In addition to the already-deported parents, there are currently 900 additional parents facing a "final order of deportation," though Judge Sabraw has placed a freeze on all deportations until reunification has been completed.

Though the specificity of punishment hasn't been defined yet, Judge Sabraw has been adamant that the Trump administration adhere to the schedule he set out. “The government must reunite, it must comply with the time frame, unless there’s an articulable reason,” he said.

When the government missed the first deadline on July 10 to reunite children under the age of 5 with their parents, Sabraw said, "These are firm deadlines. They’re not aspirational goals."

The second deadline for this Thursday, July 26, mandated that all 3,000 children up to 17 years old be reunited with their families. In his most recent hearing, Sabraw has stuck to the deadline he already established, and approved a new plan by the government to expedite the process of evaluation and reunification by excluding intensive tests like DNA tests unless "red flags" appear.