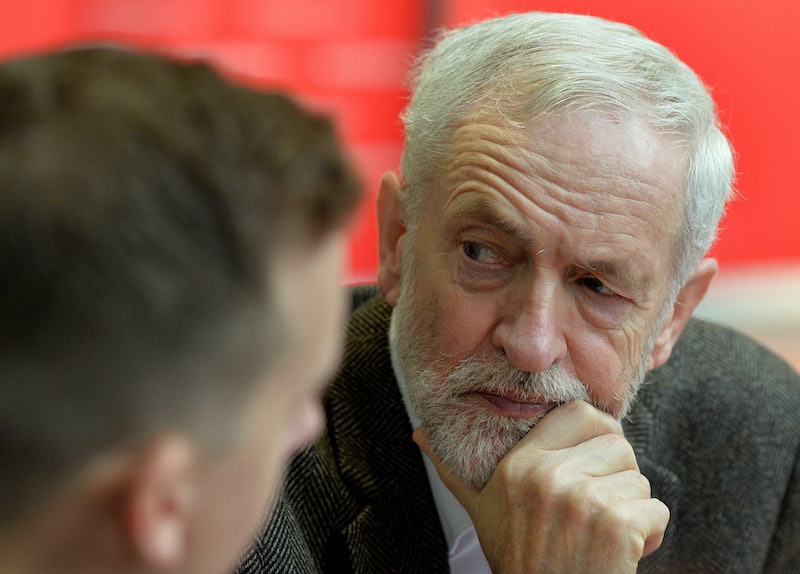 There hasn't been much in the Houses of Parliament recently to inspire hope. And Wednesday's "stupid woman"-gate was no different. When ministers should have been cracking on with disentangling the giant mess of crossed wires that is our attempt to leave the EU, they were instead consulting lip readers over whether the leader of the Labour party, Jeremy Corbyn, said "stupid woman" or "stupid people". While it was to some extent heartening to see such an uproar over the suspected use of a sexist insult, it was difficult not to feel that the Conservative party, which as Politics.co.uk reports, has a long history of proving that having a woman in charge doesn't necessarily equate to pro-women policies, was simply making a fuss to distract from its current struggles.

But if the seriousness with which the suspected insult was being taken was a glimmer of positivity, it sadly isn't reflected in how the rest of the nation feels. Sky Data conducted a survey of 1,038 UK Sky Customers about Wednesday's incident. While, despite his protests, only 12 percent of those surveyed actually believe Corbyn said "stupid people" and not "stupid women," far more interesting are their thoughts on the phrase. A disappointing 56 percent of respondents felt that the term was not sexist.

It seems baffling that in 2018 it's still necessary to explain why it's not acceptable to link someone's intelligence or ability to do their job to their gender. But apparently it is. So here goes. The wisdom or appropriateness of calling someone stupid in the workplace full stop aside, it might seem like saying "stupid woman" is a simple (if impolite) description. But it isn't. By including the person in question's gender, you're making the insult — in this case stupidity — specifically about that person's gender. It would be bad enough in any workplace, but in one that's known for being particularly inhospitable to women (according to the BBC only 32 percent of MPs are women, and sexist insults within its hallowed halls are sadly far from rare), it only becomes more disheartening.

Corbyn denies saying "stupid woman" and on Friday said he felt the row over his comments was a distraction from more serious issues facing the country including Brexit, Universal Credit, and homelessness. He referenced the homeless man, Gyula Remes, who died outside the Houses of Parliament earlier this week.

He continued: "They should be facing up to the real issues that people in our country face about the danger of a no-deal Brexit with all the chaos that will bring. And serious issues about poverty, Universal Credit and homelessness within our society."

While all of the things Corbyn cites are pressing issues that the government needs to tackle, the way this statement is phrased makes it seem like you can't care both about these issues and whether or not Corbyn used sexist language. I agree that, against the backdrop of a recent decision to reinstate two MPs suspended over accusations of sexual harassment for the recent confidence vote, there's more than a touch of hypocrisy about the fuss over the comment from the Conservative side.

But that doesn't mean those of us watching from home can't condemn both. While sexist language might not have as much direct impact on the lives of women as many of the Conservatives' actions, it's reflective of and contributes to a culture in which women are seen as inferior. A culture which discourages women from becoming politicians, a culture which sees women's issues ignored or belittled, a culture which makes it easier for sexist policies to be enacted.

And I don't know about you, but I certainly have the capacity to care about that while also caring about Brexit, Universal Credit, poverty, and the man who sadly lost his life outside parliament this week.