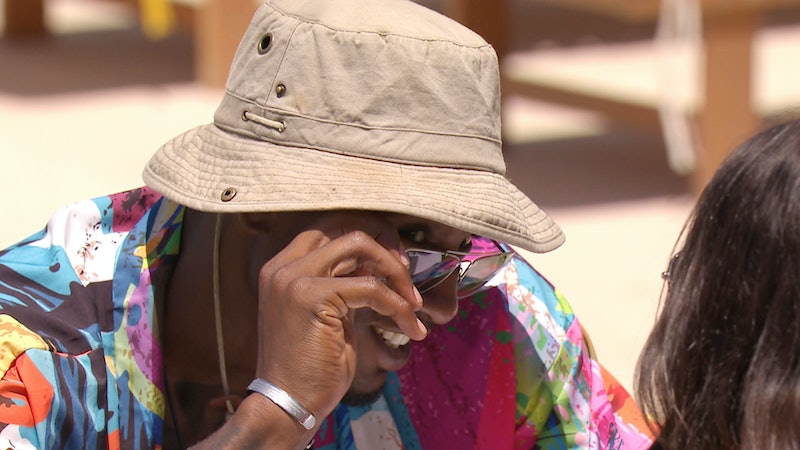 Whilst Love Island has come to an end for another year, and the nation is finally free from the grips of a 9 p.m. curfew, some of the most loved contestants will be back on television screens very soon. Undoubtedly one of the fan favourites in 2019 was professional basketball player and hat connoisseur Ovie Soko. And now it looks as though Ovie is joining This Morning for a regular cooking segment. Is this the best news you've heard all week? Yes, yes it is.

That’s right, according to Digital Spy, Ovie will be presenting a segment on the ITV breakfast show, but it won't have anything to do with sport or hats. Nope. The former islander will be a guest chef in a cooking segment of This Morning, in charge of cooking brunch for presenters Eamonn Holmes and Ruth Langsford. During his stint on Love Island, Ovie was praised for his cooking skills, and for making a delicious egg breakfast for the villa, which, when compared to his fellow housemates' attempts, made him look like a Michelin star chef.

"Cooking on This Morning is going to be dope, but I’ll need to graft hard if my infamous eggs are to live up to the hype for Love Island fans, Eamonn and Ruth," the basket baller joked, according to Metro. And the newspaper also revealed that editor of This Morning Martin Frizell is delighted to have the fan favourite on the show: "Here at This Morning we pride ourselves on nurturing and developing new talent. Ovie was undoubtedly one of the most popular Islanders this year and so we’re thrilled to have him on the show as a brand new guest chef."

It’s quite common for popular ex Love Islanders to grab roles in presenting after their time on the show, and a lucky few even go on to have their own spin-offs shows. Already, fellow contestant Maura Higgins has also landed a job at This Morning where she’ll have a phone-in advice section, HuffPost reports. And her partner in the villa Curtis Pritchard will be joining Rupaul’s Drag Race UK as a guest judge, according to the Radio Times.

Kem Cetinay, who one the show back in 2017, now is a regular on This Morning, revealing all the gossip from the villa. He also presents the Love Island: Morning After podcast. And Montana Brown from the third season of Love Island has also dabbled in some Love Island correspondence for the breakfast show. But the Love Island alumni don't usually put their hands to cheffing.

Ovie joined Love Island during this year's Casa Amor, along with six other contestants, but Ovie by far captured everyone's heart more than anyone else in the second villa. Casa Amor is probably one of the most anticipated parts of a Love Island series in which new men and women join Love Island to shake things up, and tempt the existing housemates. He originally came in to swoop Anna off her feet, who was still coupled up with Jordan. They returned to the villa together before he was dumped, but he soon became the nation's sweetheart, earning him a place in the final.

From his geeky dad jokes to his sweet nature, and, of course, his extensive hat collection, Ovie was by far a fan favourite and watching him cook up a brunch storm means we don't have to say goodbye to him just yet.