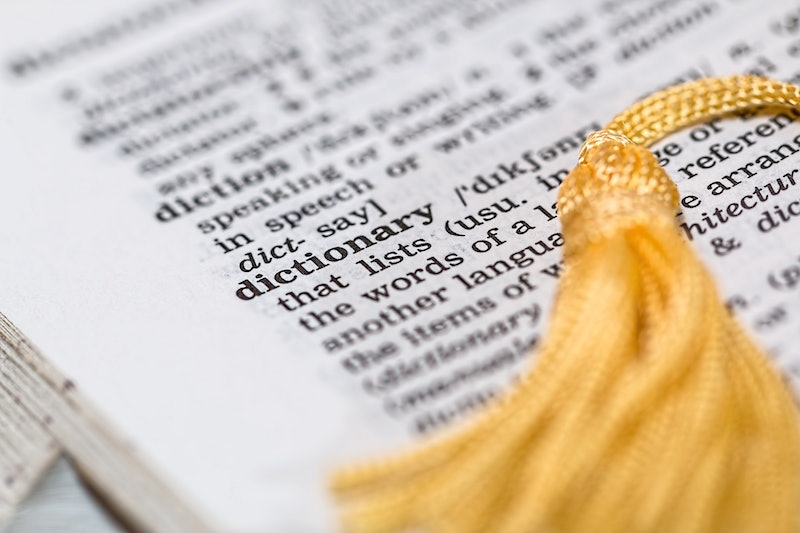 As a lover of words, books, and all things related to language, I always get super excited seeing which new words have been officially added to the online Oxford Dictionary. C'mon, you can't fail to smile when you see "yas" added to the dictionary! The website OxfordDictionaries.com contains an official record of all the words in common use — and unlike its more traditional printed counterpart, the Oxford English Dictionary, it keeps up with everything from slang to hashtags. In its latest update, 300 new words have been added to the dictionary, including "cringey," "craptacular" and "haterade"; that massive number shows just how incredibly fast language evolves.

It's also a fascinating way of seeing what bigger trends have been gaining momentum lately. Thanks to the rise of clean eating food bloggers, you'll find words like "fitspo" and "superfruit"; as Fifty Shades continues to popularize fanfiction, the dictionary now contains the word "femslash" — fanfiction which puts female characters into relationships. Even OxfordDictionaries.com seems undecided on whether or not Taylor Swift is a feminist icon; perhaps that's why they added both "squad goals" and "herd mentality." And of course, the political climate is changing in a big way, too — and the dictionary has had to add everything from "clicktivism" to "climate denier" to reflect this.

Other new words include:

clicktivism noun: Actions performed via the Internet in support of a political or social cause but regarded as requiring little time or involvement, for example signing an online petition or joining a campaign group on social media.

drop bear noun: A mythical marsupial resembling a koala, said to live in trees and attack people by dropping on to their heads from above.

drunk text noun: A text message sent while drunk, typically one that is embarrassing or foolish.

femslash noun: A genre of fiction, chiefly published online, in which female characters who appear together in film, television, or other popular media are portrayed as having a sexual relationship.

freecycle verb: Give away (something used or unwanted), as opposed to selling it or throwing it away, especially in an arrangement made via the Internet.

frita noun: (in Cuban cuisine) a sandwich consisting of a fried cake of seasoned pork and beef that is topped with very thinly cut chips and served in a roll.

herd mentality noun: The tendency for people's behaviour or beliefs to conform to those of the group to which they belong.

meet-cute noun: (in a film or television programme) an amusing or charming first encounter between two characters that leads to the development of a romantic relationship between them.

otherize verb: View or treat (a person or group of people) as intrinsically different from and alien to oneself.

otherkin adjective: Denoting or relating to people who identify as non-human.

sausage party noun: An event or group in which the majority of participants are male.

screencast noun: A video recording or transmission of the data displayed on the screen of a computer or mobile device, typically with accompanying audio.

smishing noun: The fraudulent practice of sending text messages purporting to be from reputable companies in order to induce individuals to reveal personal information, such as passwords or credit card numbers.

third gender noun: A category of people who do not identify as male or female, but rather as neither, both, or a combination of male and female genders.

And keep your eye on the OxfordDictionaries.com Twitter account, which will be announcing new dictionary words throughout the day!