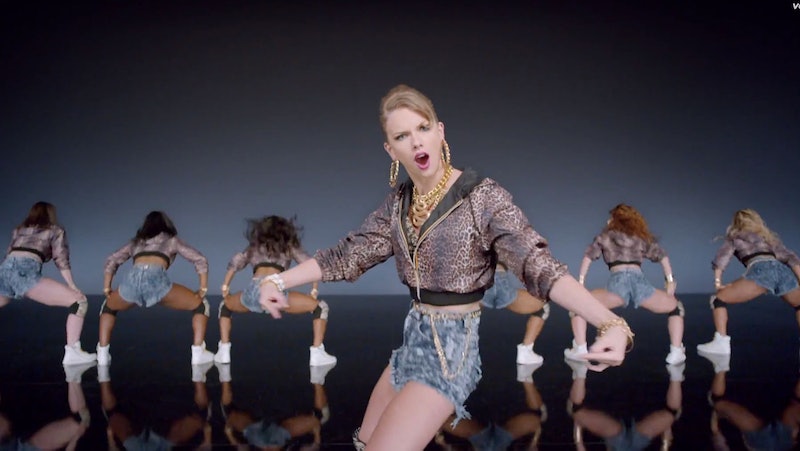 Know this: I used to love Taylor Swift. She was the one I ran to when my first serious boyfriend dumped me days before my 18th birthday. She was the one who cheered me up when my grandma died. We're only a few months apart in age, so I feel like we sort of grew up together. But as much as I adored her in our teenage years, particularly during the "Love Story" days, we've gone our separate ways recently. Due to irreconcilable differences, I've officially broken it it off with her.

It started with the smallest annoyances. The whiny breakup songs were getting old, and I got pretty irritated when she complained about her dating life becoming "a national pastime." Come on, Taylor. Her public spat with Katy Perry made me roll my eyes, but her response to Nicki Minaj on Twitter was what got me riled up. And her recent flaunting of her girl "squad" was the real icing on the cake.

However, those are all small examples of the bigger issues at hand. As a feminist of color, I feel disheartened when I hear Taylor Swift speak about feminism, which she does pretty often. She is so caught up in her white privilege that she can't even consider that there are any other perspectives out there. That wouldn't normally be so upsetting if it were any other famous singer/songwriter, but Taylor holds a lot of power. People everywhere listen to her every word. Yet instead of teaching girls and women valuable lessons, I feel she is merely perpetuating several archaic values.

I might get a lot of hate mail for this one, but I'm prepared. Taylor Swift is old enough now to understand the ramifications of her public actions, and we need to hold her accountable. Here are five reasons I no longer call myself a Swifty.

1. Her Music Videos Are Full Of Cultural Appropriation

Swift got some real heat for her "Shake It Off" music video, and rightfully so. Just like Miley Cyrus and Katy Perry before her, she used parts of black hip-hop culture for entertainment without showing any real interest in the people who created them. Many people claim it was done differently than her counterparts because it wasn't done seriously. But it's not her place to make fun of twerking.

Although I was disappointed in "Shake It Off," I'm a pretty reasonable person, so I was willing to forgive her for the misstep. Then I saw her "Wildest Dreams" video. This time, I couldn't find any excuses on her behalf. In this video, she and the filmmakers romanticize colonialism in Africa. The landscape and wild animals are mere props in a storyline that painfully echoes European imperialism. To top it all off, there isn't a single person of color in the whole four-minute video.

I wouldn't be surprised if you're bored to death of hearing about the Twitter squabble between Swift and Minaj that took place last year. But as much as it was painted as just another "cat fight" by some media outlets, there was a much deeper meaning. It was indicative of how blind most white women in Hollywood are to the race-based injustices that women of color face every day.

Nicki was simply noting how black women are hardly ever recognized in the music industry, even though they are significant influences on pop culture. She also called out the fact that winning videos always feature "women with very slim bodies." Instead of recognizing the heart of her comments, Swift jumped in and accused Minaj of pitting women against each other. She exhibited the crux of White Feminism: completely ignoring serious race-related issues while strutting a feminism that is defined as "women sticking together." As Nosheen Iqbal wrote for The Guardian, Nicki was "archetyped as the angry black woman," while Taylor was "bizarrely cast as the feminist hero."

I have yet to see anything from Taylor that would indicate that she cares about women of color and their struggles. She defines feminism as "another word for equality" and complains about the double standards we still face. While those are valid concerns, she doesn't seem invested in the immense struggles nonwhite women face every day.

3. Her Use Of "Squad" Is Also Cultural Appropriation

The hashtag #SquadGoals took off running in 2015 after Taylor started bringing out a band of her famous girlfriends — including Karlie Kloss, Cara Delevingne, and Selena Gomez — at all of her concerts. #SquadGoals refers to the objectives a group of female friends want to accomplish together. One of this group's such achievements to date is starring together in the music video for "Bad Blood," which won the MTV Video of the Year Award. Since then, Taylor's "squad" has become infamous.

However, she is appropriating the term "squad" without ever acknowledging where it came from. When you look at the history of the word "squad" and its original meaning, it's easy to see it points to a very small group of underdogs. One analysis even claims that you can't say "squad" without inferring a struggle. This is precisely why it has become an important term for blacks who have united against the systemic racism they have faced for generations. They have banded together to form much-needed allies, both in life and in the music industry.

Taylor, though, has stolen this word from marginalized communities and is overusing it to exhibit her pack of merry supermodel friends. Judnick Mayard wrote for The Guardian about this cultural appropriation and said that by claiming this term, Taylor was feeding into the "whitesplaining" of black culture. She says, "Taylor Swift is basically quoting the language of the oppressed" without any inclusion of the people who are responsible for its meaning in the first place.

4. ... And The Demographics Of Her "Squad" Are Problematic

They're supermodels and singers. They're tall and thin. With the exception of one or two, they're white and blonde. And yeah, they're all pretty.

This loyal crew is a symbol of feminism in Taylor's mind. She thinks she's educating her female fans on the importance of sticking together for the sake of women's rights. The problem is, though, that it's merely a symbol of White Feminism. All-inclusive, intersectional feminism — the kind of feminism we need to see displayed today from women in positions of power like Taylor — means not being limited to the able-bodied, Anglo-Saxon, cis straight women on magazine covers.

The nature of Swift's "squad" is about as shallow a representation of feminism as you could possibly get. As Jill Filipovic wrote for The Washington Post, feminism is "more than just supporting your girlfriends and churning out charming catchphrases about girl power."

Besides, I don't know about you, but when I look at pictures of Taylor's "girl squad," I'm slammed with PTSD from my childhood days of getting bullied. Evidently, I'm not the only one. EJ Dickson wrote a savvy piece for Mic called "The Reason Why Taylor Swift and #SquadGoals Are Totally Disturbing," reminding us that, although female friendships can be strong and useful in today's world, they can also be a scary shade of girl cliques.

For those of us who don't look anything like this mini-sorority (and, let's face it, the majority of us don't wear a size 0 and aren't six feet tall), watching them flail around on stage together can be unsettling. It's easy to feel left out when we look at them. It's even easier for young girls to eventually believe that this is what the average group of girlfriends should look like.

5. She Refuses To Acknowledge Her Privilege

Swift has painted herself as an underdog since the day she stepped into the spotlight. It's a brilliant but incredibly frustrating formula. It's given her that girl-next-door image, making the young crowd feel like they could actually be her friend. Last year, The New York Times explicitly called her "the underdog" who turned out to be the "cool kid." But this classification couldn't be farther from the truth.

Taylor had a leg up from a very young age. Her father came from three generations of bank presidents, and her mother worked in finance. As early as 10, her mom drove her to karaoke competitions, and for her 16th birthday, she was given a brand-new convertible Lexus. She herself says that her parents raised her with the expectation that she would work in corporate America.

This doesn't take away from Swift's hard work and talent. However, it is both unfair and deceitful to present herself to the public as an underdog. In interviews, she often says she had to overcome a lot to get to where she is today. This is the most frustrating part for me, because it feels like a publicity stunt (and it is). Meanwhile, there are countless artists of color who have had to face incomparable obstacles just to release an album; and they may never get to the same level of stardom as Taylor, due to their lack of privilege.

I haven't completely lost hope in Taylor Swift. I like to think that she will grow and see these issues clearly one day. With the tremendous platform she's got, she could educate the world on race and gender issues, and even truly help disenfranchised communities have a voice. But for now, it doesn't seem like she's concerned with stepping into that role.