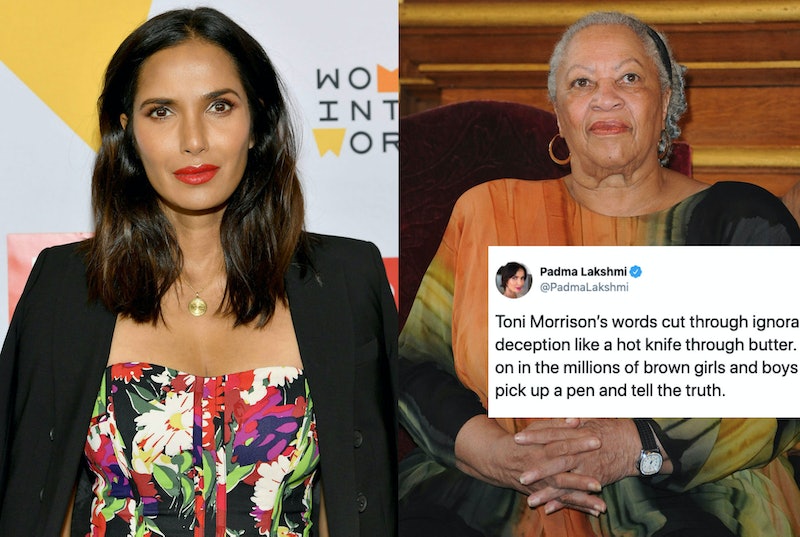 In light of the sad news announced on Tuesday, Aug. 6, Padma Lakshmi honored Toni Morrison in a powerful way on Twitter. She was, of course, a highly successful and respected author known for books like Beloved. Morrison died at the age of 88 at Montefiore Medical Center in New York on Aug. 5 following a brief illness, a rep for her publisher Alfred A. Knopf confirmed in a press release. Her family also released a statement. Following Morrison's death, many celebrities have remembered her on Twitter, including Top Chef's Lakshmi.

The Bravolebrity chose to honor the late author by highlighting her long fight against racism. Lakshmi tweeted,

"Toni Morrison’s words cut through ignorance and deception like a hot knife through butter. Her legacy lives on in the millions of brown girls and boys she inspired to pick up a pen and tell the truth."

Lakshmi also tweeted a clip from a 1993 interview Morrison did with Charlie Rose. If you haven't seen their chat, it's definitely worth 55 minutes of your time, specifically the part where the Pulitzer Prize winner discusses racism. In the video seen below, Morrison made the television journalist and viewers examine racism in a way that it's not normally dissected. Morrison said,

"If I take your race away, and there you are, all strung out. And all you got is your little self, and what is that? What are you without racism? Are you any good? Are you still strong? Are you still smart? Do you still like yourself? I mean, these are the questions. Part of it is, 'Yes, the victim. How terrible it's been for black people.' I'm not a victim. I refuse to be one."

Morrison didn't stop there, but continued,

"I'm not going to erase my race or my gender to get there. I want all of it. I deserve all of it. We all do. I don't want to be blanded, bleached out in order to participate in this country and walk any hall of power or corridor that I want to. If I'm not good enough, if I'm not smart enough, then that's it. I'll take that hit."

Morrison's words ring truer now more than ever, especially in a world where white supremacy still exists. Like Morrison told Rose, "And my feeling is that white people have a very, very serious problem and they should start thinking about what they can do about it. Take me out of it." It's been 26 years since Morrison's interview with Rose, but, sadly, racism and violence continue to permeate the world.

If anyone should take anything from Morrison's discussion, it's this statement: "If you can only be tall because somebody is on their knees, then you have a serious problem."

Now that's a statement to give some serious thought, isn't it? Like Lakshmi pointed out, Morrison was a true leader who wasn't afraid to speak her mind about the important things. She didn't back down against racism. Now more than ever people need to rise up like Morrison and fight the ongoing battle of hate and ignorance.