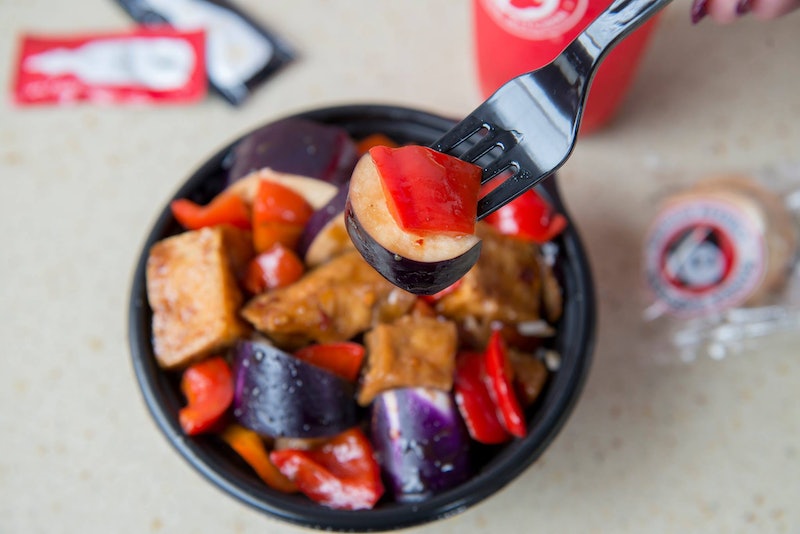 Big news for vegans today: Panda Express is adding two vegan-friendly items to its menu by the end of the month, according to VegNews. The existing recipes for the chain's Eggplant Tofu entrée and Chow Mein side dish will be adjusted such that they no longer include animal byproducts — and though the items aren’t strictly vegan due to the fact that they will be prepared in the same kitchens as non-vegan items, it’s still a welcome change for vegans, vegetarian, and flexitarians who love their Panda Express.

The new items — or perhaps more accurately, the reworked items — come on the heels of a petition organized by the non-profit Vegan Outreach encouraging Panda Express to begin including vegan offerings on their menu. “Panda Express is the world’s go-to restaurant chain for American Chinese food. Yet with over two thousand locations, they don’t have a single vegan entrée,” the petition noted.

Panda Express has had a couple of veggie-based dishes available for some time; the Eggplant Tofu and Chow Mein, for example, don’t have meat-based protein in them. However, as the Vegan Outreach petition observed, these two menu items have still traditionally used chicken broth and “other animal-based seasonings” as ingredients. The Panda Express website has always been careful to note that the chain “does not have any vegetarian or gluten free dishes” on item pages for seemingly veggie-based items.

Vegan Outreach’s petition suggested that Panda Express make some small changes to the Eggplant Tofu and Chow Mein options such that the ingredients would no longer include meat or animal byproducts — and that’s exactly what the chain will do: According to Vegan Outreach, the chicken broth and animal-based seasonings will be removed from those two dishes and replaced with vegan- and vegetarian-friendly alternatives. Green Matters reports that the change will happen by the end of February in all 2,000 of Panda Express’ U.S. locations.

It’s worth noting that the new items can’t be considered completely vegan; though they are made from ingredients that are free of animals and animal byproduct, they’re still prepared in the same kitchens as the chain’s non-vegan items. “Over the past few years, our teams at Panda Express have been hard at work to make recipe adjustments and scale them nationwide to provide a variety of American Chinese dishes for our guests who live a plant-based lifestyle,” Panda Express said in a statement released to Food and Wine. “Such options on our current menu include Super Greens mixed veggies, Eggplant Tofu, Chow Mein, and Steamed White and Brown Rice. While these dishes do not have animal product or byproduct, all items at Panda Express are cooked and prepped in the same kitchen facilities in store, so we have not claimed that our menu is vegetarian or vegan.”

The restaurant also emphasized their commitment to transparency. “We listen closely to guest feedback, and we will continue to be transparent in our brand communications out of the utmost respect for their lifestyle and dietary choices,” their statement continued. “To reiterate, the shared kitchen prep is an important factor to note — and one that we always disclose — in case there are any allergens and dietary restrictions/preferences.”

Regardless, the news is still pretty major. As Vegan Outreach noted, “While seemingly small, this change by Panda Express will make a big impact. Not only will the chain contribute less to animal suffering by using more plant-based ingredients, but it will send a powerful message to other chains — this is financially beneficial and if we can do it, so can you.” Having options available that suit a wide range of dietary needs is essential for building an inclusive world — and major chains and restaurants stepping up to meet those needs goes a long way towards making that inclusivity happen.

Indeed, Panda Express joins a growing number of fast food and fast casual restaurants adding vegan-friendly fare to their menus. Carl’s Jr., for example, welcomed the Beyond Famous Star plant-based burger in early January; Pizza Hut UK launched a vegan pizza topped with jackfruit for Veganuary this year; and Chipotle added the tofu-based sofritas option to their menu way back in 2014, to name a few. The trend shows no signs of slowing down, either — so, vegans? Get ready to have a lot more options in your life. More are almost certainly on the way soon.